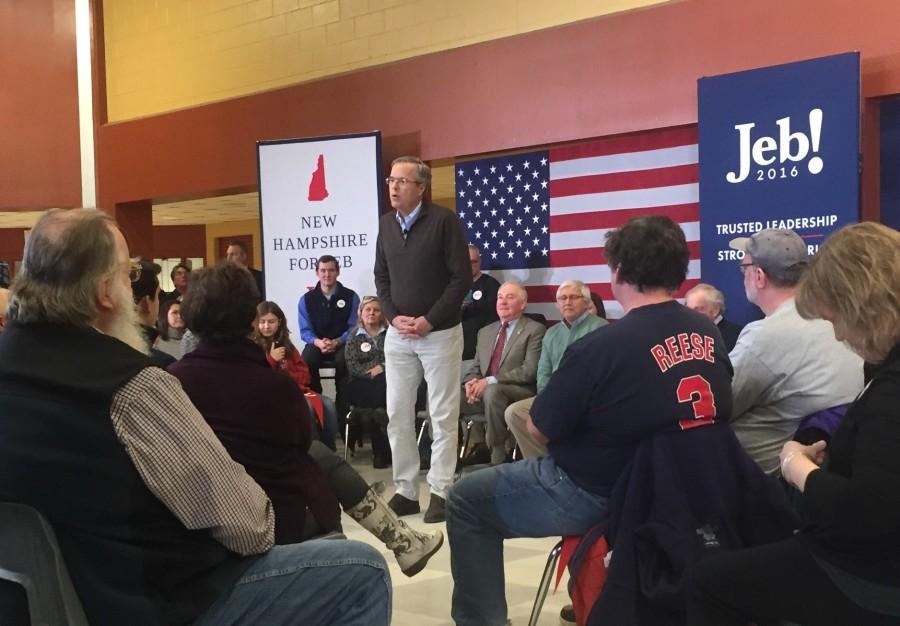 Saturday morning Governor Jeb Bush came to Souhegan High School for a town meeting where he spoke to local citizens and and answered their questions.  People of all different ages had the opportunity to meet the candidate, as well as hear, in person, what Governor Bush would do to solve the problems people were most passionate about.

Bush arrived at Souhegan around 10:30 am greeted by Souhegan student journalists from The Claw, Souhegan’s digital magazine.  The students each had the chance to ask Governor Bush one question they were most curious about.  Upon hearing Ben Wesenberg question relating to the cost of college education, Bush replied, “I’m going to unveil a plan next week that moves away from the student loans financing universities,” said Governor Bush, “…it forces universities to lower the cost.  It shouldn’t cost forty thousand dollars a year to go to school.”

Sophomore Ben Wesenberg, who was working as a photographer for The Souhegan Claw, was skeptical of the governor’s response, having different political views himself.  However, Ben says, “I thought the overall experience was very educational and neat.  It was amazing to see all the preparation, cameras, lights and people who put their effort into this race.”  Once the students finished their interviews, Jeb progressed into Souhegan’s cafeteria where a large, and excited crowd awaited him.

After a brief introduction, Jeb Bush took the stage and gave an overview of his political ideas; then it was up to the public to ask for answers to the questions closest to their hearts.  These questioned ranged from, “What were the last three books you read?” to “As president, how do you feel about trying to work to encourage people towards signing this treaty (United Nations Treats for Disabilities Rights)?”

Governor Bush addressed each question with great care. When addressing a young boy who asked Bush how he maintains faith in the American people when they are so close to electing Donald Trump as its leader, Governor Bush said, “I don’t think Trump is a reflection of the American people… There are extraordinary acts of courage, and kindness, and compassion, and creativity, more here than anywhere else in the world… I think the power of our country lies in the American people, not in our government.”

On the topic of gun violence within the United States, Governor Bush said he thought the problem lay in the fact that we allow mentally ill citizens access to incredibly dangerous weapons.  “I think the issue is how we identify people that have serious… mental health challenges that are spiralling out of control…” he said, and, “to intervene before they… kill innocent people.”

When speaking about our military budgets, Bush explained his disappointment in the technology that America has been sending young men to war with.  “The pilots should be older than the planes!” he exclaimed.  Another town member asked whether he supported a decision the Obama Administration made, he responded saying no, and then changed his answer, admitting that he did not have all the necessary information to make that kind of judgement.  He said, “I start with the premise of knowing what I don’t know and seeking the best advice.”

Being at a school, education was a big topic for discussion. One citizens asked about the governor’s opinion on Common Core, which Bush responded to by outlining his plan to raise the standards of education in our country.  “I think our standards need to be higher,” said Peter Winter, a citizen whose three sons went through the Amherst school system. “…I think his (Governor Bush’s) ideas and thoughts,  and what he plans to do would be helpful to the country.”

Other attendees were not as enthusiastic about the candidate.  George Carlson, a junior at Souhegan High School who attended the town hall meeting said he supported Rand Paul. “I’m here to broaden my view points and ideology… but I don’t like Jeb’s plan to approach ISIS or his tax plan.  If America wants to make a change, they have to look past the establishment.”

Mary Lefebvre, another Amherst citizen at the town hall meeting said, “I do support him [Jeb Bush]… I like Common Core.  I think he’s a good man. I think he’s got a good soul and a good mind and I think he might elevate the standards of our community.”

The overall response from the people at the town hall meeting was enthusiastic, and not just from those who supported Governor Jeb Bush.  With the New Hampshire primary approaching at a seemingly exponential rate, the candidates are receiving more and more public attention.  No matter who they supported, everyone seemed happy to have what can feel like a distant race, personalized.