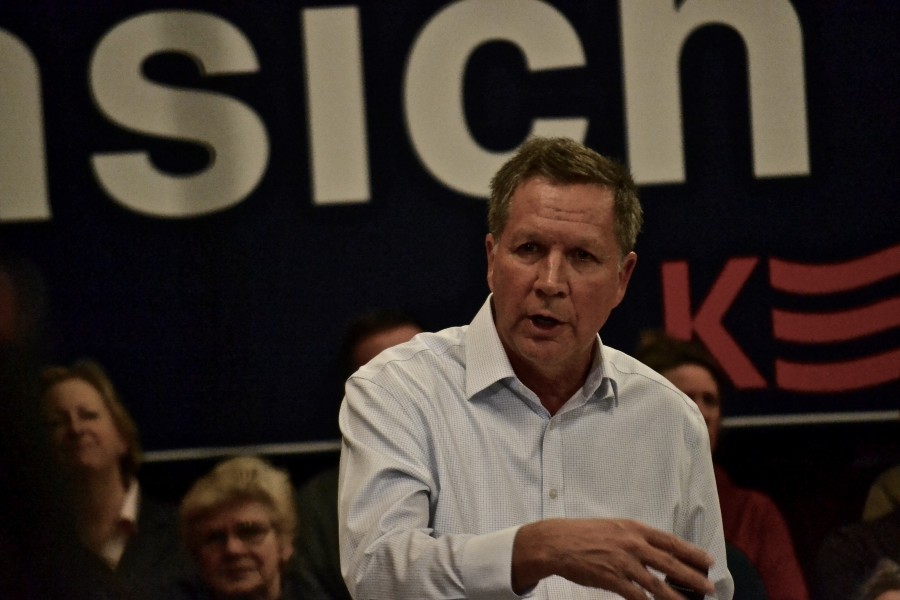 Souhegan High School’s digital magazine has been tracing the political campaign for a few weeks now.  They started when Jeb Bush came to Souhegan for a town hall meeting on January 16. The following week, they continued their work watching Bernie Sanders speak in Bedford, and yesterday, The Claw students covered John Kasich’s town hall meeting that took place in the Souhegan cafeteria.

Citizens once again filled the cafeteria, starting at about 5:30 pm.  There was media coverage from all over the nation as people from all ages gathered to meet the candidate.  After a brief overview of his goals if he were to be elected president, Kasich passed the mic to the citizens so he could answer their questions.

When asked about his stance on Common Core, Governor Kasich said he wanted to raise the standards of education in our country. He said, “In my state I’m for high standards and a curriculum set by the school boards. I do think we need to have testing but I don’t the testing should be driving people insane every week.”  On the cost of education, Kasich suggested colleges should become more cost-conscious.  He also mentioned that he would encourage employers to help their workers pay off college debt, and that he would consider community service as a way to pay off student loans.

One of Governor Kasich’s priorities is reducing the amount of national debt in our country.  Throughout the entire evening, billboards in the background were displaying both the national debt and the debt per citizen as both numbers were continuously increasing.  “People say, how do Republicans and Democrats ever get along?” Kasich says,  “Well, Clinton had been impeached, we had government shutdowns, we negotiated… we passed the first balanced budget and we got the budget balanced four years in a row, and it was the first time since man had walked on the moon.”

When the topic of foreign affairs came up, Kasich spoke about how he intends to pursue relationships with several different countries.  He wants to get Turkey back into our orbit. Kasich said that he would not send an ambassador to Cuba until he saw them improve on human rights.  He views Mexico as a developing nation and addressed the immigration problem saying that he would have a legalization process for the illegal immigrants who are currently living in the United States with clean records.  From there he would use new technology to help reinforce the border and keep out further illegal immigrants.  While on this topic he also mentioned his excitement for the Brazil Olympics and his love of the golf courses in Ireland.

“As far as Kasich’s stance on this spectrum goes I think he’s got some ideas for this country that don’t really compare to the other Republicans, and I think that’s maybe what’s caused him to rise up a little bit,” says Alex Craven, who, as a liberal, does not support Kasich but respects him more than the other Republican candidates.

Another topic the governor focused heavily on was medicaid.  Governor Kasich said that he would repeal medicaid, but replace it with another similar system that would guarantee health care to those in need.  One man spoke up about his early retirement age and his inability to get health care due to a pre-existing medical condition.  To this, Kasich replied, “It’s just outrageous that we didn’t protect people with a pre existing condition… that’s not America, that’s not the America we love.”

Paula Garvey, a teacher at Souhegan who has a daughter suffering from the chronic illness Cystic Fibrosis says, “I think when it comes to health care, he is more liberal than a lot of other Republicans.. he is right, the rest of the world is piggy-backing off American R&D and prices elsewhere are so much cheaper, but we still are paying the cost everyday.”

As Kasich left the school, Souhegan students who were part of The Claw followed him out and asked their final questions to the candidate with his full attention.  “I love New Hampshire because everyone comes here and you can really get to meet all of the candidates,” says Junior, Will Facques. “I think (students should be getting involved in) local government especially… because that directly translate to us, whereas national government goes through a lot before it gets here.  As we saw today with the national debt, that’s all going onto our shoulders, so we students should be the most involved.”