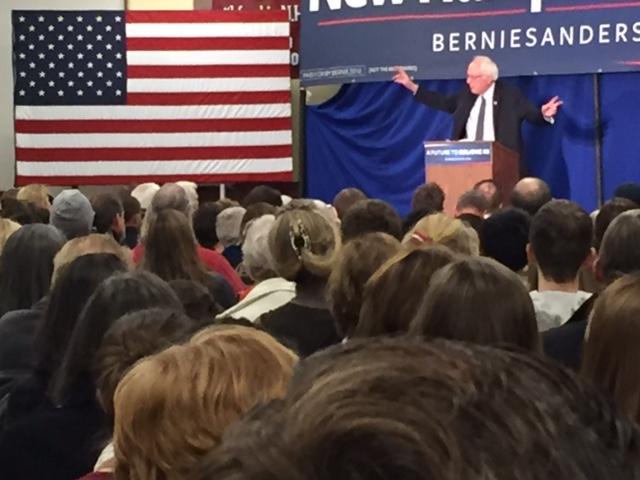 Bernie Sanders Speaks to Crowd of all Ages

Senator Sanders began his speech with discussing his improvement in the New Hampshire polls.  He is currently at the top of the Democratic polls, over 11% higher than close competitor, Hillary Clinton.  New Hampshire is one of the few states Sanders is leading in.

Sanders empowered the audience telling them, “Real change never comes from the top down, it always comes from the bottom on up”. Sanders’ campaign is focused on giving back to the middle class. “It is not acceptable to me…and it is not sustainable when the top one tenth of one percent, now owns almost as much wealth as the bottom ninety percent”.

Sanders discussed his idea of free public schooling for college students giving the  opportunity to young adults who would normally not be able to afford the increasing prices of higher education.  “If we want the best educated workforce in the world, we need to make some fundamental changes in the way we do high education, and one way we have got to go forward…to make public colleges and universities tuition free,” he said.  According to Senator Sanders this would eliminate a major amount of crippling debt that the majority of citizens have to face.

The Claw staff spoke to supporters and volunteers for Bernie.  They shared what his campaign really means to them.  Tristen, a college student currently attending St.Olaf college in Minnesota, is volunteering at the Bernie office in Nashua. “I have seen my fair share of politicians, this is the first politician who genuinely has an agenda that is for the middle class”.  Avid Bernie supporter and Souhegan senior Claire Foley said, “I think whoever we elect in this next election is really going to determine how our generation responds to a crisis and the issues that we face”.

Tristen and Claire were not the only young people there.  The crowd had a large population of highschool and college students, excited to get involved with this year’s election.  The democratic youth vote has shown to make a dramatic difference in the polls.