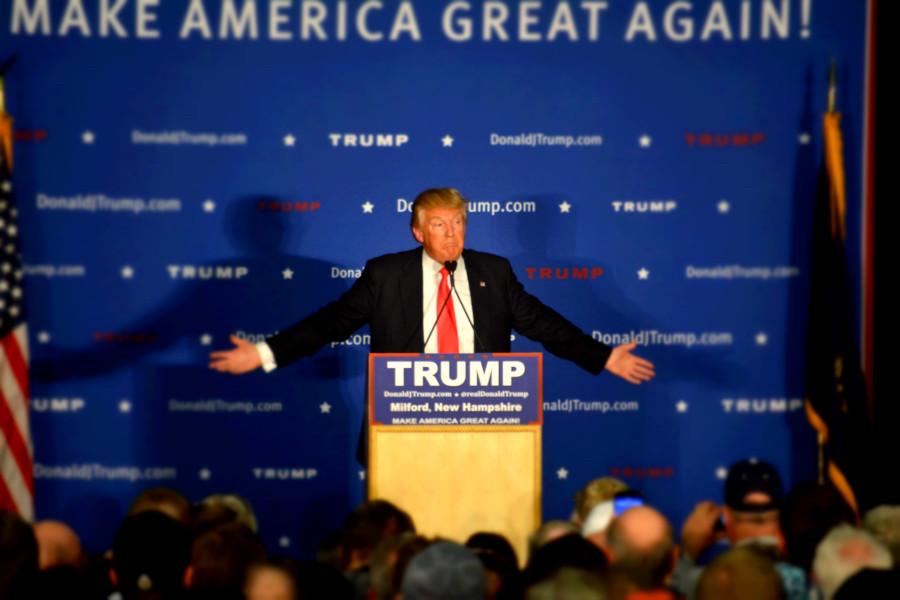 On Tuesday, February 2nd the Hampshire Hills tennis courts held their capacity of over two thousand people, eager to hear what New Hampshire’s leading Republican Candidate, Donald Trump, had to say.  Just down the hall another three thousand people gathered in an overflow room, just as excited to be in the same building as the man who could be America’s next president.

As one of the most controversial candidates out there, Donald Trump attracted thousands to his event on Tuesday.  His supporters started lining up outside Hampshire Hills around three o’clock, four hours before Mr. Trump was scheduled to arrive.  Dressed in Donald Trump t-shirts, hats, and even wigs, they waited for security to open the doors.

Mr. Trump had quite a large number of young supporters at the event.  “I like Trump because of his strong foreign policy and the immigration policies that other candidates like won’t take on as strongly,” says Adam Caplet, a nineteen-year-old from Pembrooke.  When asked which his favorite of Mr. Trump’s policies was he responded, “ISIS, because they’re like an abomination to this Earth.  Obama just neglected to take them on like he just thinks they’re a non issue.”

Trump has received a lot of attention in the media for his policy on immigration.  On Tuesday he said, “I want people to come into the country, but they have to come in legally.”  His proposed plan to build a wall between the United States and Mexico had a lot of support from his fans at Hampshire Hills.  “I think it’s absolutely excellent,” says Amherst citizen, Rienna  Decodis.  “Actually just had a post on here; illegal (supporting Trumps policy on illegal immigrants) does not mean that I’m a racist. It just means I’m not a moron.”  Many others shared this opinion including his introductory speaker Ann Coulter who discussed the threats illegal immigrants present to the United States.

When asked why she supported Trump’s policy on immigration, Nancy Schofield replied, “I remember my grandfather and my grandmother had to prove a lot to come here, and if I went to another country I’d have to have work papers and such… They (illegal immigrants) are taking away from a lot of people that really need the homes here.”

Another topic Mr. Trump focused on heavily throughout his event was climate change, or more accurately, the lack of climate change. “They don’t want to bomb the oil because environmentally it would be a pollution event,” said Donald Trump as his audience laughed. “It would be an event of pollution as they say.  It would add to the carbon footprint…They said one of the reasons they won’t bomb there is because they don’t want the pollution going into the atmosphere. The whole thing is ridiculous.”

War Veteran, Phillip Joseph Callanan, supported these ideas saying, “I like his character…he’s for the old values you know we’re losing them now a lot.”

Not all of the people who attended, however, were supporting Mr. Trump.  Many were there to learn more about the political race as a whole.  “When I heard Trump would be in Milford, I knew I had to go,” says Jorick Ehrenstein, a senior at Souhegan.  “To be honest, the main reason I went was for the entertainment factor. Trump’s campaign seems so ridiculous to  me that it’s actually pretty comical.  It blows me away that he’s built himself such a huge following, but clearly there are a lot of people here in our area that love him.”

And educational purposes were not the only reason for non-Trump supporters to attend.  The event attracted many protesters, some from Souhegan High School themselves.  Claire Foley, Souhegan senior, gathered a crowd of about fifty people to stand at the Hampshire Hill’s entrance with signs protesting the event and Trump’s policies as a whole.  “I decided to start the protest after just throwing the idea around with some friends,” Claire says. “Emma Naprta and a couple of other Souhegan kids attended the NextGen Climate Change conference in the fall, and a huge part of that was surrounding protesting, making your voice heard, and doing it in an appropriate way.  I was expecting maybe half a dozen people to be interested but it grew, I hatched a game plan, and everything else worked itself out.”

“The speakers at the event continued bashing other candidates of both parties, to which the crowd always responded with a lot of excitement and applause.  My impression of the crowd was that they were very judgmental and un-accepting towards anyone who disagreed with their views,” says Jorick, who attended the event on his own, proudly wearing a Bernie Sanders T-shirt and pin.  “There was a strange tension lingering in the air everywhere I went.  I would get dirty looks left and right, and I even received some pretty nasty comments.”

During his speech Mr. Trump said, “If we have protesters, I love it! In fact… I’m going to set my protesters up.. because those cameras never move from my face because they don’t want to show how many people I have.”  Trump had indeed gathered plenty of supporters gathered both on the Hampshire Hills tennis courts where he presented, and in the overflow rooms.  All together there were over five thousand attendees.

Though Trump may have said he loved his protesters, the protesters would beg to differ.  Rachael Facey, Seth Facey, Isabel Cullen, and Hannah Rowe, all current Souhegan students, attended the rally for informational purposes, yet were asked to leave by former Souhegan student Danny Tiso.  “I felt that we were being treated unfairly because we weren’t doing anything except listening to what Trump had to say,” says Souhegan freshman, Hannah Rowe.  “I don’t think they had the right to kick us out just because we didn’t like the candidate.”