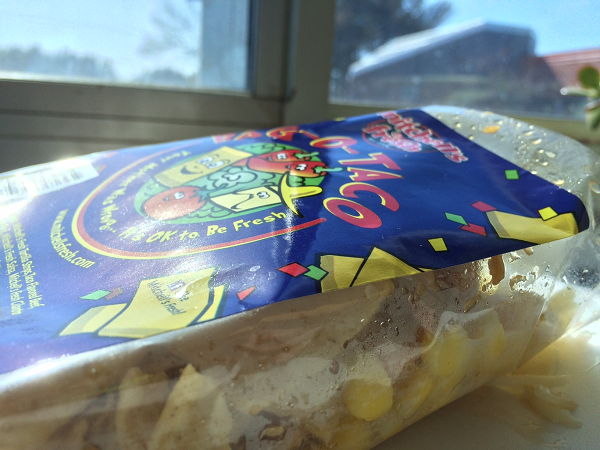 The Fall of Humanity or The Great Bag-O-Taco Drought

Souhegan High School; Amherst, NH- February 8th 2016: a day which will live in infamy. At least once in our lifetimes there is a moment which forces us to confront our own mortality. I’m afraid to say that today will be remembered as that day for many, nay, for all. This is the most cataclysmic spectacle I have ever laid my eyes on and, though I am not one to jump to conclusions, our lives will never be the same. There is no one on God’s green earth more distraught than I.

The Bag-O-Taco was missing today. They banned outside food, then they banned white flour, then sugar, then fat, and happiness went away somewhere along with it. We watched helplessly as everything good about the world was taken away. Yet despite the vast restrictions put on us by those who wished to see us fail we had prevailed. We succeeded where everyone else had failed. Our chefs used their ingenuity, channeling our spirit to create the greatest edible product seen in years: the Bag-O-Taco. We had heaven on earth; every day I would consume a bag full of tortilla chips, taco meat, cheese, lettuce (if I were in the mood), and hot sauce. I was the happiest man alive. I remember it like it was yesterday, but lo, I should have known that good things never last. They wouldn’t let us live in paradise for long. They would ban every last good thing until our chefs were truly broken. Only then would we be forever stuck with horrendous  food, and only then would we live with their pain. Once our chefs were forced to give up, we’d be finished. Forever.

Without explanation the Bag-O-Taco has disappeared. I wish I could say I understand why this has come about- I know how everyone looks to me to be the voice of reason and truth- yet even I cannot comprehend what has happened nor do I know what could be done to end this diabolical plot of duplicity. I am not one to put the blame on others, yet there is no one more personally responsible than- you guessed it- Michelle Obama.  I already hear naysayers. “How could she be personally responsible?” you ask, in your signature bellyacher tone. Well, she just is, so stop wasting my time with ignorant questions. The question you should be asking is: “Why?”.  Alas even I cannot fully understand why anyone, let alone the First Lady, would hate a group of people so much as to personally decimate everything they care about, in such a dastardly manner as this. I assure you the end times are upon us… is there anything left to do but die?

Yes. We have one last mission. In robbing us of our old purpose, Michelle Obama has unwittingly given us a new one: to live on and remind future generations of this heinous crime against humanity. In these darkest of times I call upon you, my brothers and sisters, to rise up. Help each other through this time of crisis using any means at your disposal. Above all else, resist the temptation of defeat. Michelle Obama’s policies may have struck us low, but we will stand taller than ever before in resistance…