Souhegan Students Fight for Their School 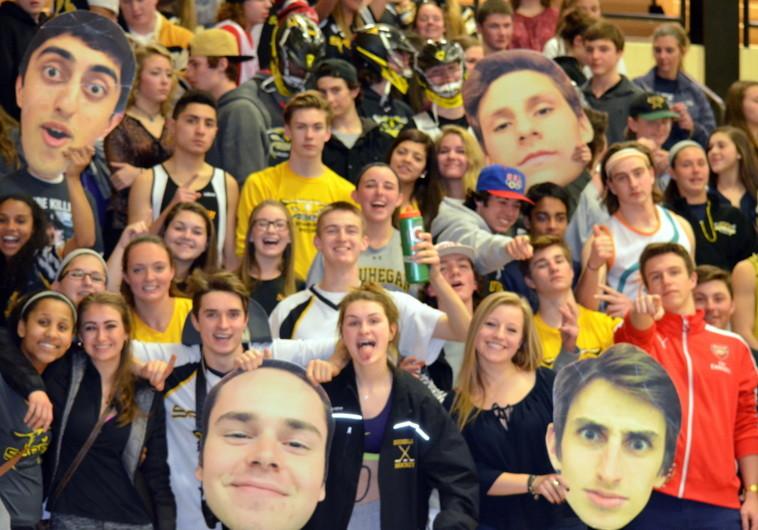 With the primaries in NH recently coming to a close, one would think that political tensions in a small New Hampshire town would be calming down until the next national election rolls through.  In Amherst, however, with the local elections following right on its heels, politics are more heated than ever.

On March 8, the town voted on the proposed budget for the 2016-2017 school year.  The school board has proposed a reasonable budget, but if this budget did not pass, Souhegan would face budget cuts that would be hundreds of thousands of dollars.  The school could be forced to cut staff, classes, arts, athletics and more. Thankfully, the budget passed and a crisis was avoided.

The student involvement in this budget process, though has been enormous, as Souhegan kids started to realize how greatly the outcome of this vote would affect them. One senior, Raju Gandhi, has even chosen the topic as his senior project. Senior Project is a graduation requirement that requires extensive research, applications to your life, and a twenty minute presentation on a topic of the student’s choice.

“At the beginning of the year I had no idea what was going on with a budget that would affect me, as well as over 800 of my fellow classmates,” says Raju Gandhi.  “I decided that I wanted to improve the student knowledge, voice, and involvement in the Souhegan budget situation.”  As part of his project, Raju spoke to his entire grade as well as the Souhegan Community Council, the school’s governing body, about the importance of this vote.  Being a dedicated athlete, he was particularly struck by the idea that sports could be taken away if enough money was cut.  Along with his presentations, Raju created a petition with over 250 signatures, and he started a peaceful protest at the boys basketball game.  Raju encouraged students to attend the game dressed in Souhegan athletic attire to stress the importance of athletics at our school.

Another aspect of voting day was the school board elections. While some of the candidates are still in favor of next year’s proposed budget, which is still significantly less than this year’s budget, other candidates wanted to reduce Souhegan budget quite substantially.  Not only would this kind of cut affect the futures of Souhegan students, but it would be an enormous detriment to the entire community.

A group that calls themselves Students for Souhegan, put up signs around town to raise awareness of the vote.  The group also marched in front of the school and polling areas with signs to support their views.  “We’re a group of students who want their voices heard,” says a member of Students for Souhegan who wishes to remain anonymous. “We hate how taxpayers are considering money more than the future generations — the generation who will be the doctors to take care of them, the teachers for their grandkids, and so on.  We are standing up because as students, we are the most directly impacted and our voice cannot just be ignored.”

A record number of people attended the school board meeting and deliberative session this February, filling the theatre’s capacity as well as two overflow rooms with live screening of the meeting.  At this meeting citizens discussed the proposed budget and the potential for further cuts. “I was excited to be a part of my community and see first hand what happens at these deliberative sessions,” says senior Rachael Facey who attended the event. “However, I was taken aback by those who would not allow students to speak at the meeting or even be present in the theatre during the session. I believe students should have just as much a right to speak as the adults do, afterall, we are the ones whose education and futures will be affected by these tax cuts.”

“I was thrilled at deliberative session to see Liz, Claire, Maddie, Alex and other Souhegan students whom I didn’t know.  We had never seen such a crowd at a meeting of citizens of our town,” says Nan Stearns, a long-time devoted Amherst citizen.  “Sorry were we that only one student was allowed to speak, but Alex [Glavin] did a splendid job.  We were so proud of him, and of the rest of the students who hung around a bit out of sight. We expect to see students holding signs, answering questions, voting if old enough, and generally being a part of our Democracy.” I’m sure now that they see the power of their voice, Souhegan students will remain part of the democratic process.