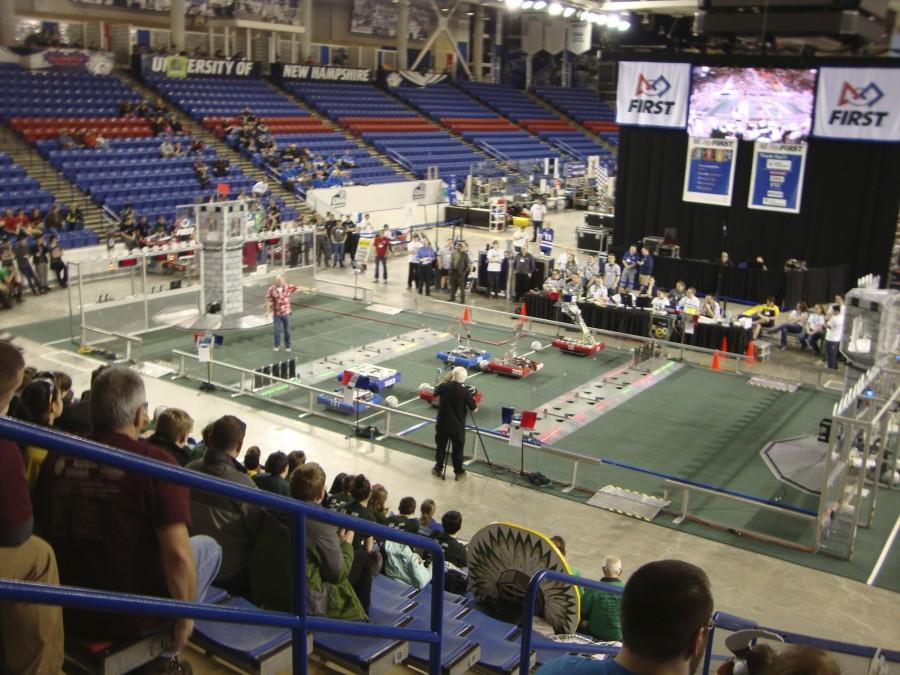 Hundreds of teenagers are sitting in UNH Durham’s hockey arena, cheering and clapping. There’s at least three girls dressed as Dorothy Gale, and about 30 people in cardboard viking helmets. Once in awhile, someone with giant phoenix wings flaps over the audience. And here, Souhegan’s FIRST Robotics team, number 138, watches as their robot and drive team compete in one of FRC (FIRST Robotics Competitions)’s most complex challenges to date.

The team, called Entropy, is highly qualified to judge the difficulty of this game. It’s been around for twenty years, almost as long as the school itself. Each year, from kickoff in January to the end of the six week “build season”, teams design, prototype, construct, program, wire, and test their robot. Then, they seal it up until competitions in March and April, with only six hours to make any last minute changes. Everything is centered around participation in the specific game created for each season.

This year, the game was called Stronghold. Two alliances of three teams each rush to break the other team’s “defenses”, while also attacking their opponents’ tower with foam “boulders”.  Robots go through four out of five defenses from both sides to get a ranking point.  Each team must deposit eight boulders in the opposing alliance’s tower from either the high or low goal for a ranking point. Additional points are added for staying on the tower at the end of the game or pulling the robot up on a bar attached to the tower . This is grossly oversimplified, but the game’s really complicated. Here’s a link to a video about the rules if you’d like to know more.

Entropy’s final robot was designed with an ambitious set of goals: not only did the team want it to be able to score in the high goal, it also had to be able to get under a low bar (16 inches from the floor), cross many other defenses, and scale the tower. Regarding their design process, head strategist Dan Oates said, “At the beginning of the year, we all looked at the challenge, read the rule books, got together and we decided we had a pretty ambitious goal.” The ambition payed off, as robot 138 was the first to hang from the bar on Friday, and placed 15th out of 40. They were chosen by the 4th place seed as one of two alliance partners, and ended up moving on all the way to the semifinals. There, they lost by only three points to the first place seed alliance.

FIRST isn’t just about mechanical engineering and programming. Although those things are important, and programs such as FIRST LEGO League, FIRST Tech Challenge and FRC are great ways to expose students to them, it’s also a fantastic way to learn marketing, design, leadership, advertising, interview skills, and teamwork. It’s all about gracious professionalism and cooperation; these two terms basically mean respecting your opponents and learning to work with them even while competing. When asked if he would recommend FIRST to other students, Oates said, “Absolutely…even if you’re not going into engineering, being able to work as a team, to break down a complex problem into manageable parts, is extremely important.”

Volunteers and team members set up for a match