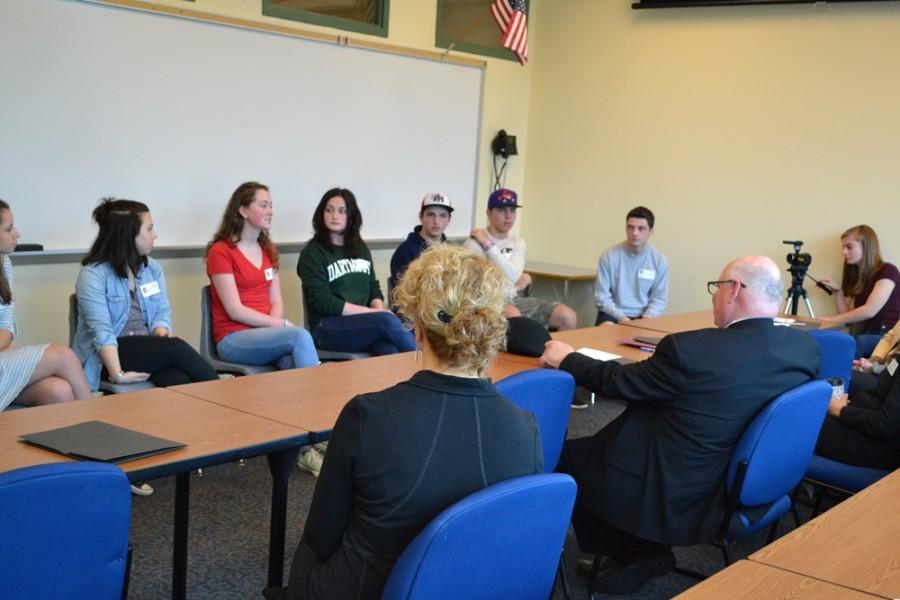 Earlier this month, several high ranking U.S. Department of Education officials visited Souhegan High School to discuss the vision of Souhegan High School  with special focus on PACE.  PACE is a performance based assessment that was piloted in SHS in 2012. PACE is integrated into the curriculum at Souhegan because it is made by the teachers and it replaces standardized tests as well as a normal assessment that students would have previously taken.

After the student panel, Ann Whalen, Senior Advisor to the U.S. Secretary of Education, discussed her thoughts on Common Core and what it is, “What we try to do is instead of talking explicitly of Common Core we talk about the skills and the knowledge that every student needs to be college and career ready.” She said that Common Core is just, “ a state led effort to say that our current standards aren’t good enough.” A big issue in Common Core is that people don’t know what it really is.  Whalen stated, “A lot of the time the questions are [to the people against them]‘have you actually looked at the standards?’ ‘Do you know what’s in them?’ ‘What about them do you disagree with?’ ‘Is there anything in them that you wouldn’t expect your child to do to become college or career ready?’” Also, the Senior Advisor, discussed some of the plans and ideas that the U.S. Department of Education has and how some have been fulfilled,

“SHS teachers are so clearly devoted to your [Souhegan students] learning and success.””

— Emma Vadehra-Chief of Staff to the Secretary of Education

“Congress and the President have just passed and signed into a new education law.” The education law is the “‘Every Student Succeeds’ law which replaces the ‘No Child Left Behind law which has been in place since 2001.”

Paul Leather, the Deputy Commissioner of Education for New Hampshire  decided on Souhegan being one of the schools to pilot PACE gave a couple of his reasons for why he chose SHS, “Souhegan is a relatively high performing district” and “[the community] has a high socioeconomic background”. Overall, Mr. Leather believed that Souhegan along with the community was a, “good match”.

Emma Vadehra, the Chief of Staff to the Secretary of Education stated that some of the most important things that she learned or found within the student and teacher panels were, “to hear from the students about the level of ownership they feel over their learning was very helpful and impactful.” Miss Vadehra also spoke of the benefits of the teacher panel and that she found that Souhegan has, “a fantastic set of teachers” and one of the biggest reasons for SHS’s teachers fantastic job of enlightening students is because they are, “so clearly devoted to your [Souhegan students] learning and success.”