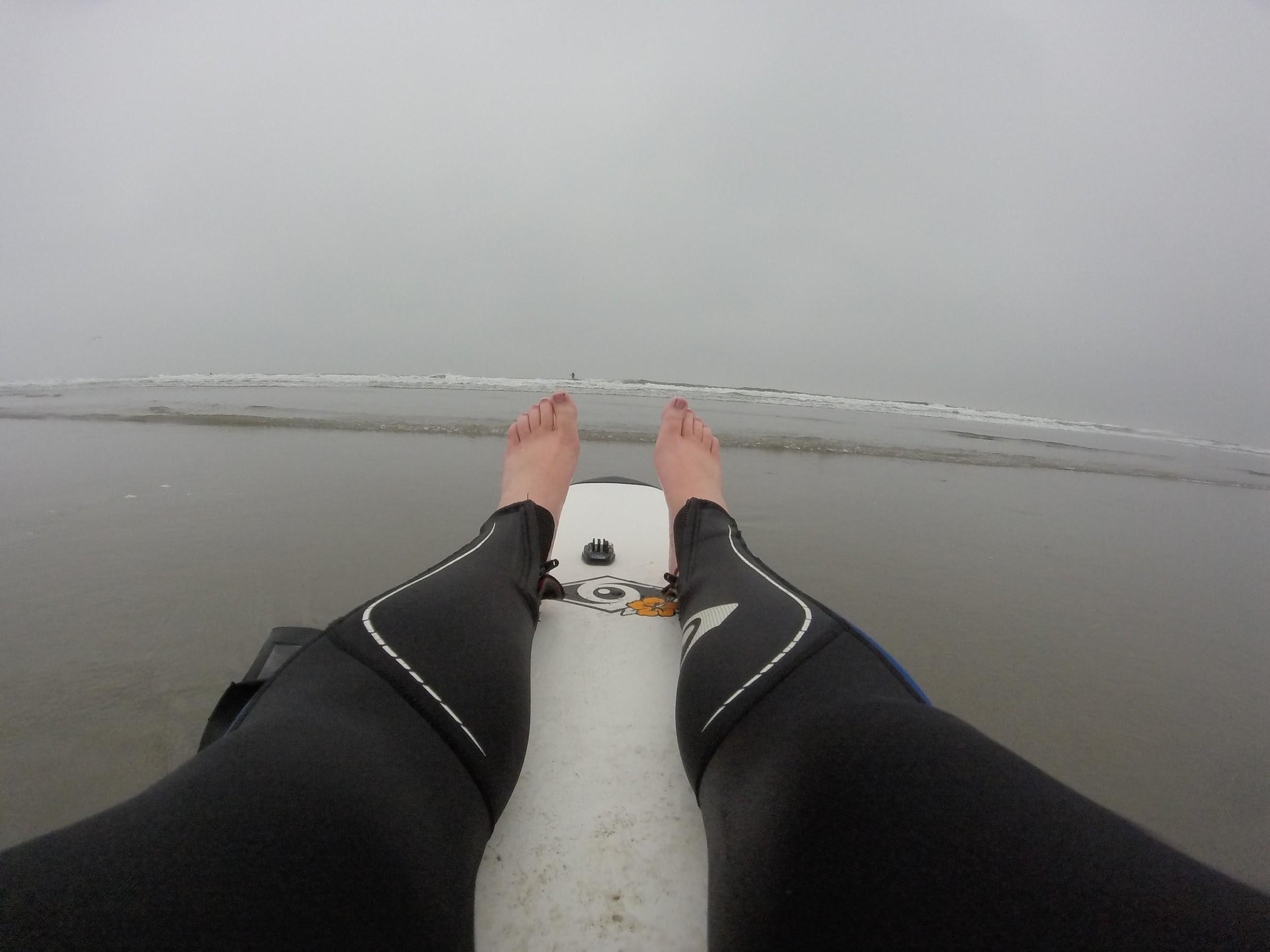 Being a surfer in New Hampshire means braving the elements. (Elizabeth Maloney)

Being a surfer in New Hampshire means braving the elements.

When you think of ocean surfing, you likely picture shimmering waves, tanned surfers with salt-sprayed hair working across the crests of waves in precise, effortless movements. The sun beats down on the water and sandy shore as bathers frolic near and in the ocean, some watching as the surfers work the waves. Maybe there are cries of gulls, laughter of children or the strains of music coming from a blanket. This iconic summer scene is played out over and over on beaches throughout the coast, but picture a surfing scene in mid-January and you may not get the same warm, fuzzy feeling. 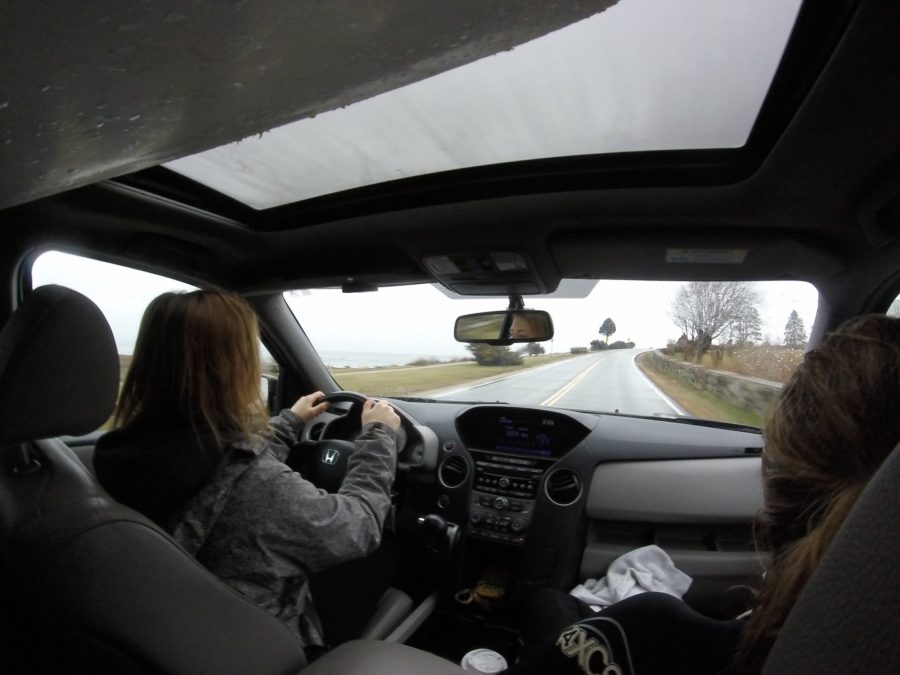 The sky is a slate gray on the cruise up I-95 to Hampton Beach, NH. Leaving our small, snowy suburb, my friends and I work our way up the coast to catch a glimpse of a handful of New England’s most extreme athletes and, if all goes as planned, try jumping on boards in the freezing water right beside them. These are the people who spend the summer dreaming of frigid waters, storms and angry seas. They’re winter surfers — and this is their season.

It’s not snowing yet, but the next few hours should bring more than six inches. At 29 degrees it’s by no means a warm day, though we’re thankful it’s even in double digits. Dressed in a down jacket, a few base layers covering my bathing suit and trusty Bean boots, I’m optimistic I’ll be comfortable           outside, until of course it’s time to change into my wet suit.

New Hampshire is known for a few things: its “Live Free or Die” motto, no income or sales taxes, no seatbelt laws, no motorcycle helmet laws, and a first-in-the-nation presidential primary. A lesser-known fact is that tucked in the state’s short 13 miles of coastline — smallest of all coastal states — are some of the best surf breaks in the Northeast. The best time to surf them, or any break in this part of the country, is a winter storm surge. But catching the best waves here is not for the thin blooded: today’s water temperature is 38 degrees, cold enough to kill you without the proper gear. Instead of boardshorts and rashguards, surfers wear 6mm hooded wetsuits with booties and mittens to match.

The winter surfers along New Hampshire’s coast are likely the most committed to the sport that you will ever encounter. Enduring the frigid waters, no matter how well suited up, requires a certain hardiness that only the most diehard surfing enthusiasts will possess — born of pure passion for the sport and a slight disregard for comfort. But those tenacious enough to brave the winter waters can be rewarded with some of the best surfing New Hampshire has to offer, especially when storms have brought impressive swells, and they can also enjoy having the beach more or less to themselves — an unlikely scenario during the summer months. 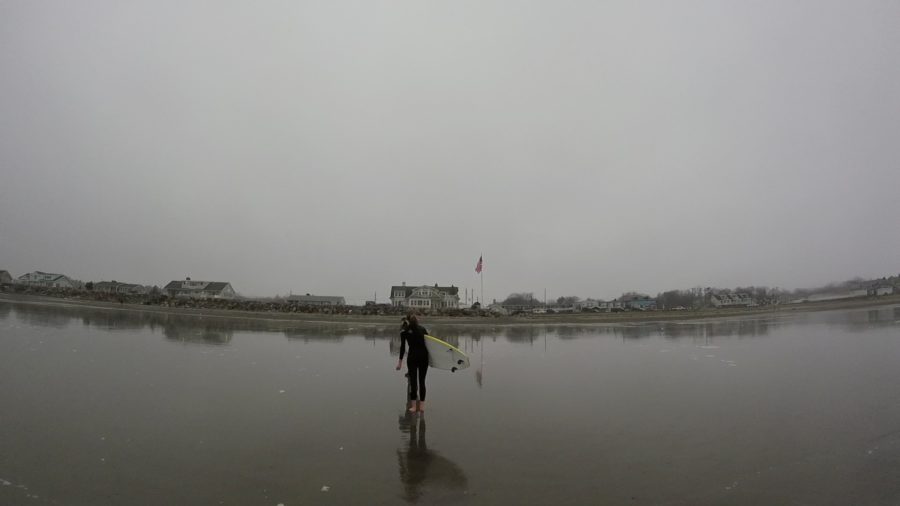 Winding along the coast, the ocean and the sky blend together in a silvery mix with no horizon. The only two distinguishable features out of the massive grey expanse are the white caps of the waves and a few black bodies bobbing up and down with the tide. Pulling into the empty parking lot at Jenness Beach I started having second thoughts, was I cut out for this? The nagging voices only got louder when my fingers began to tingle and my teeth started chattering while we unloaded the gear. The walk from the car to the water’s edge felt more like a trek through the tundra, wind cutting through our wet suits and grey rain stinging our exposed faces. Hiking our boards up under our arms, we looked at each other and knew waiting any longer wouldn’t do us any good. No dipping your toes in, bite the bullet, approach the discomfort at a full sprint and dive in.

My adrenaline was a big help in getting in the water, and staying in long enough to paddle out. It quickly faded as soon as the first wave erupted in my face and from then on the piercing cold was constant and hard to ignore. But along with the pain was the most intense feeling of awareness and genuine presence I’ve ever felt. Every part of my body was ringing, I could feel every inch of myself from fingers to toes wake up. It took all my strength to get past the breaking waves, my slow, frozen fingers weren’t working very efficiently.

Once the ocean calmed and white caps weren’t licking at my face I sat upright on my board and looked to my left and right. On both sides were the black hooded figures, again bobbing up and down with the tide. They did not resemble me whatsoever, they were the essence of peace and contentedness compared to my frantic, buzzing energy. I realized then that there were multiple rewards from this sports and many different ways to experience it. For myself, it was an awakening of all my senses. It was an eraser of everything in my head and an electric jolt to my heart. But for them, it appeared to be the thing that brought them tranquility and solace. It was apparent that this was what they knew, this was something they needed. 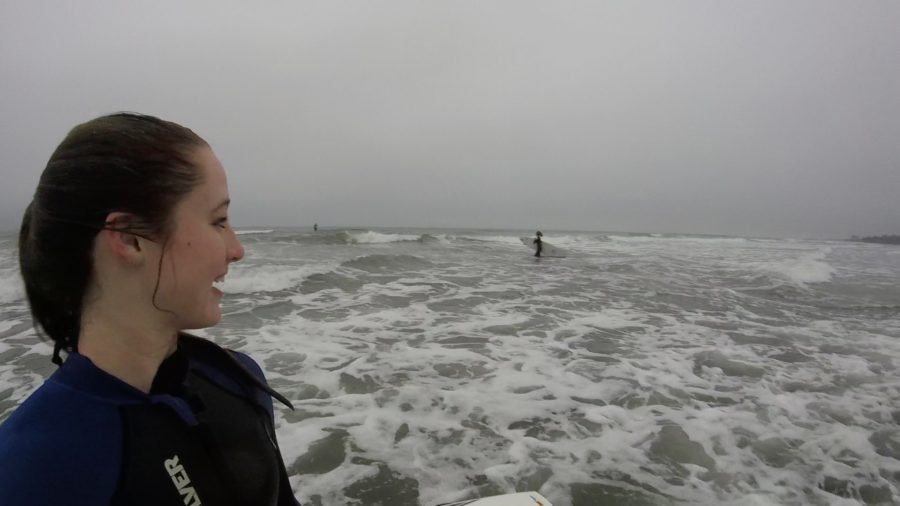 The waves began to swell beneath my board and it was time to give it a try. Try I did, succeed I did not. Numb limbs and
extremities made balancing more challenging than I anticipated and flop, slip, splash I went, into the grey churning water, time after time, with only my ankle strap to pull me upward. Limp limbed and panting, I paddled back to shore and collapsed on the wet sand. Out of everything to feel in that moment it was the pain in my cheeks that caught my attention. I had been smiling, so hard it hurt, the entire time. My remaining adrenaline subsided with a frosty gust of wind and to the towels I ran as fast as my swollen, red feet would carry me. While packing up our gear we talked to a few seasoned surfers but conversations on the beach are brief; it’s too cold to stand around idly. With the elements stacked against them, it’s clear that these guys love what they’re doing and wouldn’t trade it for any fireside, not when the surf’s this good. Hour upon hour there’s a constant stream of people more than willing to surf in weather that would deter most people from taking a walk. There’s no crowd, no one to impress or meet at the beachside bar later on. It’s just like-minded individuals chasing great waves for the sport of it. Live free or die, indeed.

In a 2013 review of the Patagonia R4 Hooded Wetsuit ($529), the owner of Cleanline Surf hailed it as the warmest wetsuit on planet earth. Designed for the most frigid waters (38-49°F), the R4 pairs Patagonia’s Limestone Neoprene outer with a merino wool liner. Designed to be virtually leak-proof, the R4 is made to last twice as long as most wetsuits and is fully warrantied against defects.

Another critical component to any winter surfing attire is footwear. As I learned from experience, you cannot surf if you can’t feel your feet. The 7mm Hyperflex AMP Cold Water Wetsuit Boots ($68.99) feature super-stretch neoprene and a poly fleece lining.

Board style will vary greatly depending on the rider, but for beginners such as myself, Ralph Fatello recommends a softboard and they are more affordable as well. The 9’0” Blacktip Soft Board ($380) is a great option   for first time or younger surfers between 120 and 180 lbs.

He is a bit of a local legend on the NH seacoast. In addition to surfing, he is a guitarist, filmmaker and an avid blogger. He’s served in Vietnam, has traveled the world in search of waves, surfing both coasts, Hawaii, the Caribbean, South America and was one of the first people to surf in Nova Scotia. Ralph is a husband and father to three grown children and lives in Hampton.

How and when did you first fall in love with surfing? I saw surfing on a black and white TV in the summer of 1963. I was instantly mesmerized by what I saw. I begged my parents to move to Hawaii; they laughed at me. One day late in the summer of 1963 my dad pointed out some waves breaking on the beach and said, “If you had a surfboard you could surf those waves.” The next summer I got my first board. This past summer marked my 50th year surfing.

Tell me about the first time you tried winter surfing. Was it better or worse than you imagined? My friends and I started winter surfing in 1966. We were pioneers as far as winter surfing in New England. It was exciting. Especially when our parents freaked out that we were doing it. The wetsuits we had back then were “divers” suits, and it was very stiff to move around in them. Plus the water got in very easily. So it was cold, and we couldn’t last very long in those old suits. But looking back at it today it will always be a special time in my life to know that we pioneered a lot of the breaks that the kids surf today.

What are some of the challenges/benefits of surfing on our little coastline? I think the fact that you are surfing in the winter is already a challenge. Mostly a mental challenge. But today’s wetsuits make it far easier. The benefits are obvious. There are fewer surfers in the water. The winter surf is typically bigger than the summer waves. So that always makes it far more motivating. And anytime you surf over rocks is always a challenge. If you are a beginner, you should stay away from the rocky points and reef breaks and just surf the sand bottom beach breaks.

How do you protect yourself in frigid waters? You simply need to have a decent wetsuit with winter boots and gloves. Most surfers wear 5/4/3 mm with an attached hood. The extremities are important to keep warm. Lose feeling in your feet and it’s like surfing on stumps. So I recommend 7mil boots. The rest of the seasons you wear the appropriate suits. Usually 4/3 with 5mil boots and gloves in the fall and spring. And 3/2 in the summer. No boots or gloves needed in the summer. As far as actual boards? That all depends on your skill level. Winter surf for those who know what they are doing have longer and thicker boards than what they would ride in the summer months, unless you are surfing hurricane surf. But most shortboarders ride anything from 5’5″ to upwards of 7′. Beginners and intermediate surfers ride longboards year-round. Unless you are a true longboarder, you might want to try the soft top boards. Those things are great for beginners.

Any sage words of advice? Respect those who have been doing this longer than you. Learn the code of surfing. Know your limitations. There’s no shame in not paddling out if the surf is 10′ and grinding, and it’s snowing. Surfing is supposed to be fun. If you are not having fun, you should try something else.