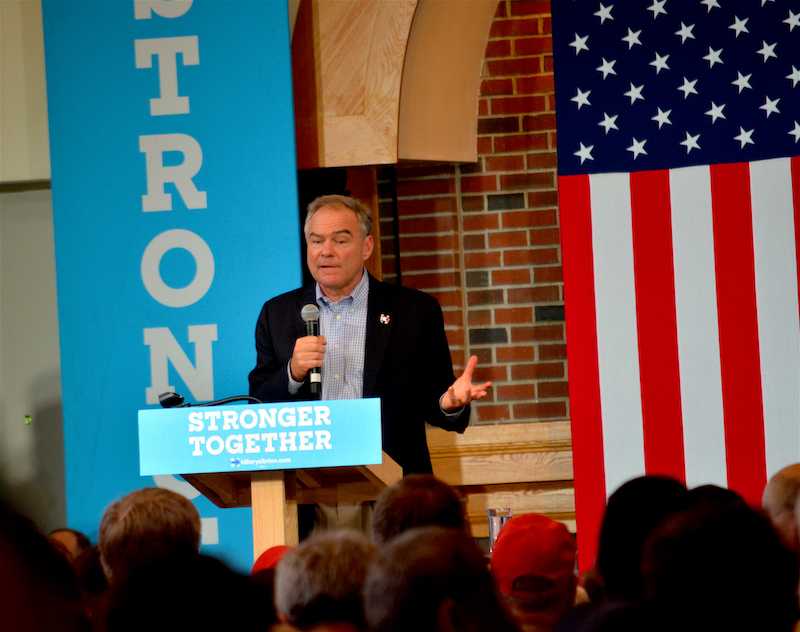 On August 13, democratic vice president nominee, Tim Kaine spoke at Saint Anselm College. While the crowd, for the most part buzzed with giddy anticipation, there were those, like Tim Golden and Paul Utiger who outwardly showed their frustration.

Golden wore his Clinton sticker backwards in a subtle act of defiance. He and Utiger were advocates of Bernie Sanders’ progressive movement.  They felt that the media had not given Sanders a fair chance and, by doing so, demonstrated the increasingly corrupt nature of America’s political system. Utiger felt wary of Clinton while Golden was against her, she is an “old time politician” they said.

The prospect of having Clinton as president made Gregg Moree, on the other hand, ecstatic. He had arrived that morning  from Harvard Square, eager to hear Kaine’s thoughts on the future. Moree smiled widely and said “let’s put people to work! And get that interest down.”

Kaine spoke mainly of his and Clinton’s plan for the economy. He spoke of raising the minimum wage, closing the gender pay gap, and providing better medicaid and social security. Connecting each of these goals was the overarching promise of building a stronger economy, structured around the success of small businesses and families.

Kaine said that Clinton had always cared about helping children and families succeed. He said that it was such passion that, even in the face of defeat, had stopped her from backing down, and that it was such passion that separated her from Donald Trump. He said “people must be able to live above the poverty line” and the audience passionately agreed.