Running For Those Who Can’t 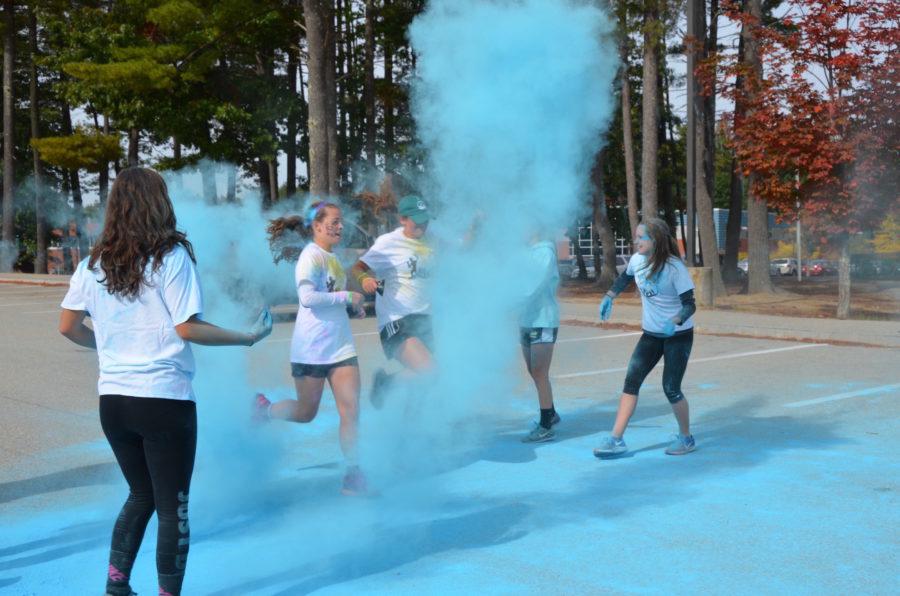 Intense explosions of rainbow saturation envelop Saber Stadium. No, this isn’t Fourth of July festivities or some horrific disaster, this is the annual Run for Gus Color Run.

Over 100 people and four dogs participated in the day’s events, which started with a breakfast for the runners sponsored by Panera Bread. The color run itself was a 5k that followed the loop similar to that of the Run for Hope which takes place in the spring. Along the route, Ethics Forum members were positioned at stations where each group threw their designated color at the runners as they passed. Though recently controversy surrounded the safety of the powder used in color runs, this color powder was just dyed cornstarch, making it completely safe and washable.

When asked why she was running, sophomore Maddie Morrissette stated “Because some of my soccer friends are running, and I really wanted to do a color run. I try to run for Gus every year”. A parent, when asked the same question, answered “To support Duchenne’s, it’s a great cause,” then added, “And my daughter really wanted me to come”.

Throughout the week leading up to the color run, Souhegan has a series of class forums where Gus’s parents, Steve and Tonya Dreyer, talk to each grade level about their foundation. This, along with the Friday night Hope for Gus football game, brings a lot of student attention to the cause. Since this week is so community driven, students encourage their friends and family to participate.

When Ethics forum member Anna Redway was asked what went into planning the event, she lightheartedly answered “A lot of conversation; everyone was on their own committee and ran their own thing. We showed up at 1:45pm on Friday and stayed till 10. Last year’s group set the bar really high, but I think we did a great job. A lot of money was raised through company sponsors”. With this event, the Ethics forum got Souhegan started off to a great year and yet again set the bar very high with their dedication.

Over the 6 years Souhegan has been involved with the Hope for Gus foundation, a total of $50,000 has been raised to support medical trials for Duchenne’s Muscular Dystrophy. Because of these funds, drugs are now under study and some are even going to trial. At the beginning of the first Hope for Gus week, Steve Dreyer said to the freshman that he hoped by their senior year a cure for Duchenne’s would be found. Six years later as Hope for Gus week continues to grow in both support base and attendance, he declared that by the time the class of 2020 graduates, that dream might truly become a reality.