A Widening Gender Gap in the 2016 Presidential Elections 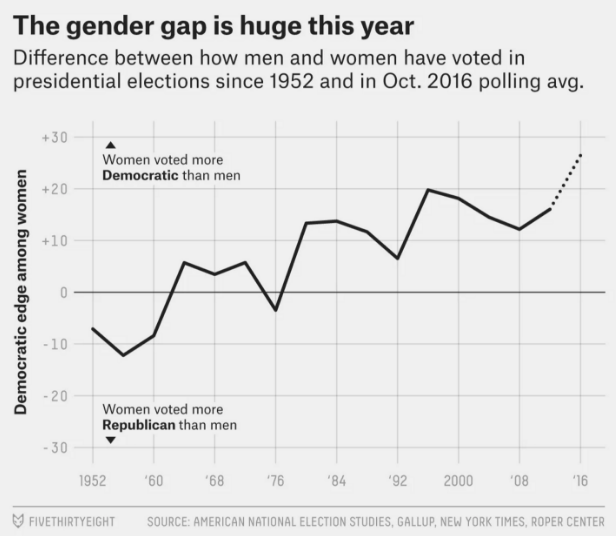 With Hillary Clinton as the top democratic candidate from the start, gender was to invariably be a part of the 2016 presidential election. She is the first woman to to be nominated  by a major political party for president of the United States.  In a country that
strives for equality for all, Clinton’s gender could not be ignored.

Today, however, gender seems to be playing a much larger role than originally thought.   No longer does gender center around Clinton’s status as a woman but her opponent’s view of them. Over the course of this election season, it was revealed that Republican nominee Donald Trump has referred to women as “pigs”, “dogs”, and “disgusting animals”. During the past few weeks multiple women have accused Trump of sexual misconduct. Accounts of such behavior have turned many women away from Trump, causing the gender gap to further widen.

As it stands right now, there is a 26-percentage-point gender gap; one of the highest in American history.   Men and women are incredibly divided this year, however the split is not even. While Trump still carries men, the amount of women who support Hillary is at a record high. Clinton has a 20-percentage-point advantage among women, while Trump’s lead among men is roughly  half of that.

What occurs on November 8 2016, is nearly impossible to predict, but the outcome may very well be decided by America’s women.