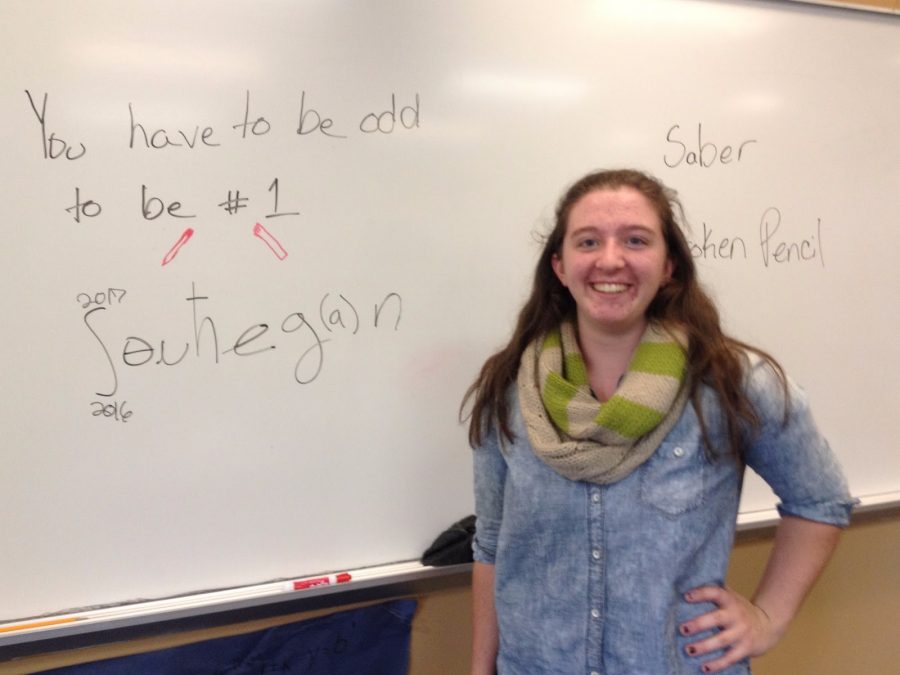 Team captain Katie Castell, with a draft of this year's t-shirt design.

Souhegan’s Math Team  is full of students who are passionate about math, problem solving, and teamwork. They are also pretty passionate about snacks, which are a constant of the club. Last Thursday’s meeting was concerned with designing team t-shirts, which feature the slogan “You have to be odd to be #1”, as well as the long-standing logo of a broken #2 pencil.

One meeting a month, the team takes a New England Math League test, called a NEML. It’s a thirty minute test with six questions. The scores count towards the total for the season, together with the competition scores. Ten students compete at the monthly competitions. The question categories at competitions are Recreational Mathematics, Algebra 1, Geometry, Algebra 2, and Advanced Mathematics, as well as a Team Category which involves all ten team members. Katie Castell, a senior captain on the team, says, “We always kill the team round, because that’s what we’ve practiced, that’s what we work on. We just hang out.” This strategy has obviously worked, as Souhegan has placed in the top three of their division for four out of the last five years. This year, they’re up against ConVal and HBHS, schools Castell calls “the big dogs” of the NH State Math Competition.

Even if you’re not interested in competing, you should still come if you enjoy math or brainteasers. “Last year we had a ton of people who just came to hang out with us at the meetings and never competed, which is totally fine. It’s never like ‘Oh, you’re not part of the team because you don’t compete.’ That’s never been how it is.” says Castelle. She’s been participating since her freshman year, and was also a captain last year.  For her, the team is more important than the problems. “I think that’s a common misconception about math team, like, it’s all about math, but for me it’s all about the team. It’s all about the people, and that’s why I love it so much.”