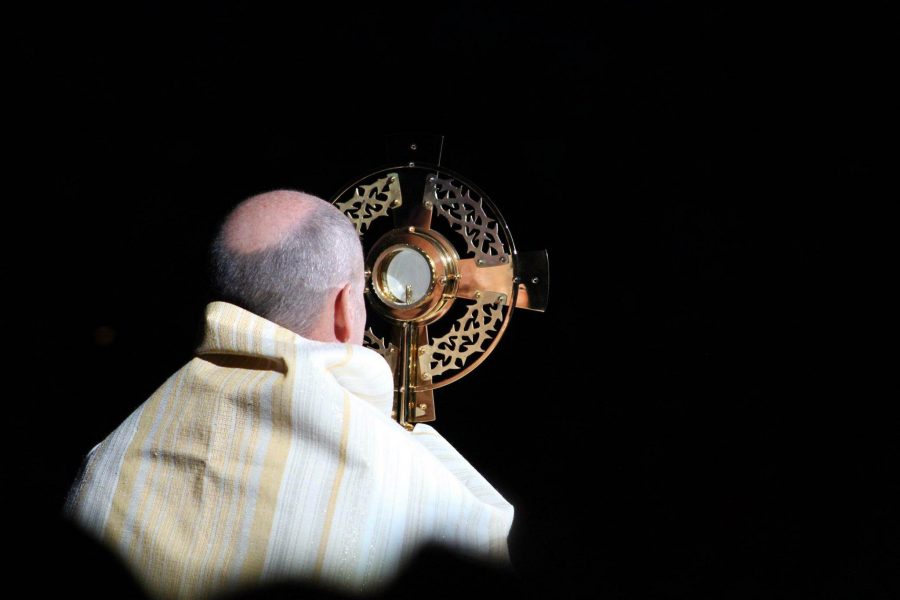 I have always been Catholic. I was baptized as a baby, I went to religious education, I made my first communion, I go to church every week, and earlier this year I was confirmed. I had always been 90% sure that He was real, and He was watching down on me, but I wasn’t completely convinced. I hadn’t made it to 100% yet. I had been working to make it to 100% and it was upsetting me that I wasn’t there yet. Many of my friends were (and still are) extremely devoted to Him, and I was envious of them, even jealous.

I had been hearing about the Steubenville Conferences from my friends from other churches. I had heard stories of people at these conferences becoming paralyzed with fear of God1. One friend had told me that someone was taken out on a stretcher one year because she was so overcome with His love. After hearing all of these stories I really wanted to go. Before I talked to my mom about it, the youth minister at our church announced that we would be fundraising so we could go this year. I was so excited the whole summer. I work with two girls who have already been to Steubenville conferences so they told me more stories about it, which got me even more excited. 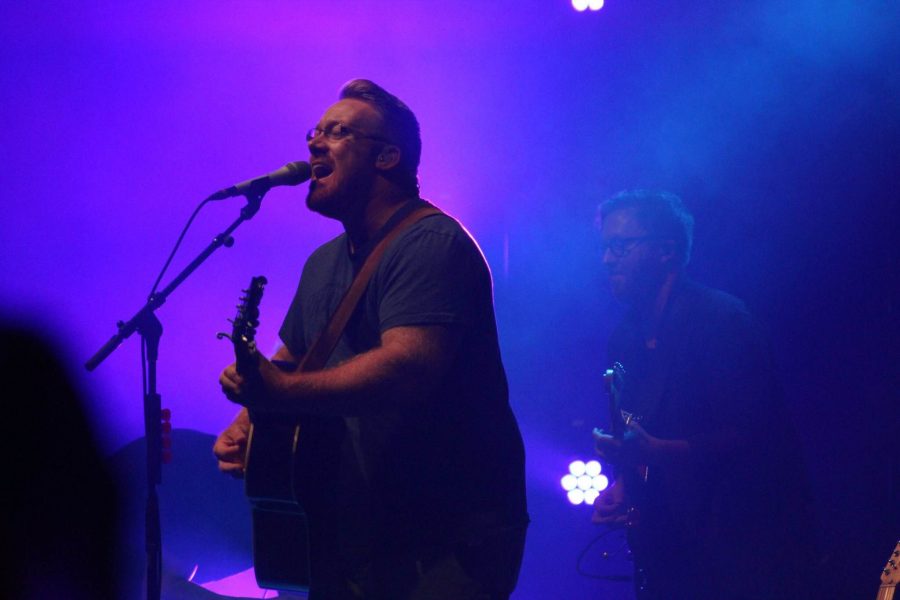 The day finally came, and we were on our way to Steubenville East. The group of people I went with were, and still are some of my closest friends, and we are now even closer because of this beautiful experience we had together. The event was being held at UMass Lowell, in the Tsongas Center. After getting settled into our dorms and eating dinner, we went into the center. The music was blaring, and my heart started to beat really fast. I heard one of my favorite songs playing, it is called “Burning in My Soul.” This song, when being performed at a concert, is sung so that the crowd sings “woah” while the band keeps singing. I’d seen this band in concert many times, and every time they played this song, I had goosebumps the entire time. After the commotion from the band had calmed down, we found our way to our seats. Then after hearing a talk from the host, we began adoration. Adoration is when the body of Christ, or the Eucharist, is put into a monstrance. This is a very powerful experience. You are in the presence of Him, your savior. The band continued to play. They played my favorite song of all time, “Oceans.” This song is over eight minutes long, and I cried the entire time. After adoration we went back to our dorms for some much-needed sleep. 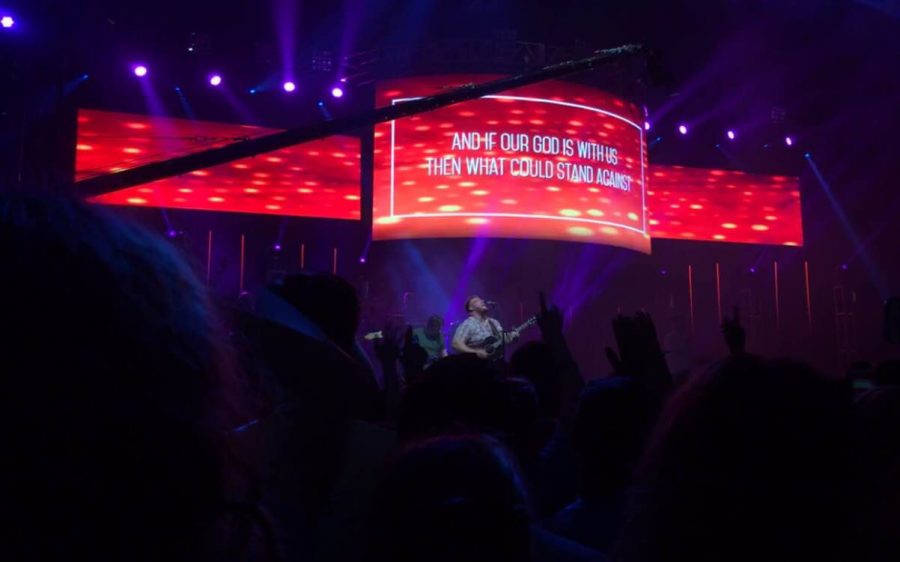 After a long day of confession, mass, and talks, it was time for the big show–Saturday night adoration. This is what Steubenville is known for. When I talked to people about Steubenville, they would always just tell me about Saturday night and that was all. Adoration began, the band was playing, and the priest began to walk around the stadium holding the monstrance in the air for everyone to see. Within just a couple minutes a girl started screaming. I can’t think of any other way to describe it but a “bloody murder scream.” She fell to the floor and continued to scream. An adult from her church rushed over and started to rock her, they sat like that for the rest of the two hour adoration, the girl letting out another scream every now and again. People began to sob and laugh hysterically. Looking around the stadium I saw people who were with Him and praising Him. I became jealous of the girl screaming, and the people laughing and crying, I wanted to be with Him too. I wanted to feel His presence as they were. When the priest was about halfway through the stadium, my friend Andrea started to cry. Andrea is super strong, she never cries, and I mean never. She never shows her emotions on the outside, so to see her cry was a beautiful thing. I embraced her, I just held onto her. While hugging her, I looked over at the monstrance, and I realized it was Him, I realized He was there. I began to cry. I loved Him. Once Andrea had calmed down a bit, we let go of each other, and I fell from my kneeling position to the ground. I began to sob uncontrollably. I was having my moment, my time with Him. Andrea embraced me, and we sat there sobbing for awhile. The priest had made his way to us. The song “Oceans” came on. My hands went up into the air, as I reached out for the monstrance. I love Him. He was right there, right in front of me. I sobbed as I looked right at my Savior. 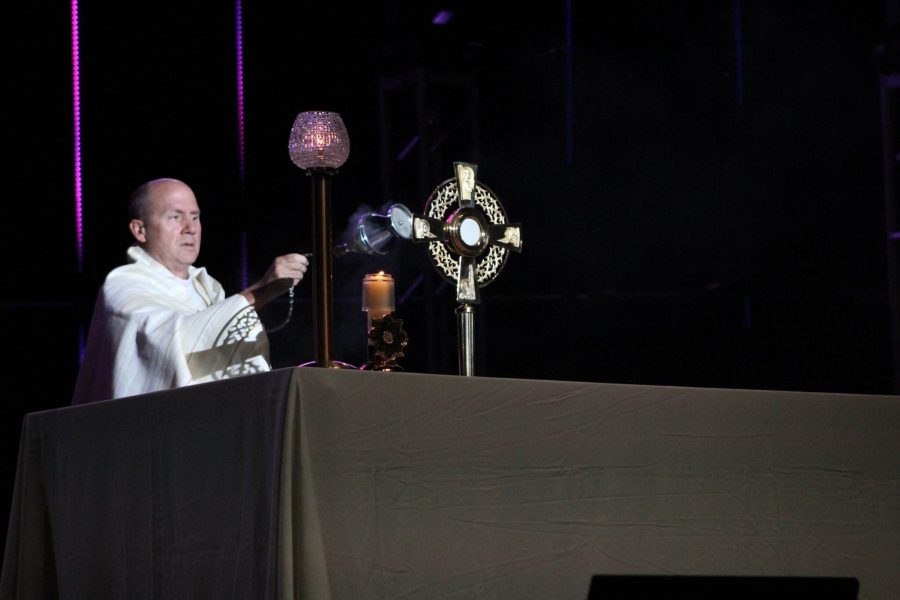 Once the priest had passed us and was moving back towards the stage, I moved my way over to my mom. My mom had been crying too. I hugged her and we sat there for awhile. When the monstrance passed in front of us again on its way back to the stage, we both put our hands out to Him. When He was back on the stage we continued to hug. I whispered to my mom, “This is the best day of the life.” She looked at me and whispered, “Maybe it’s the first.”