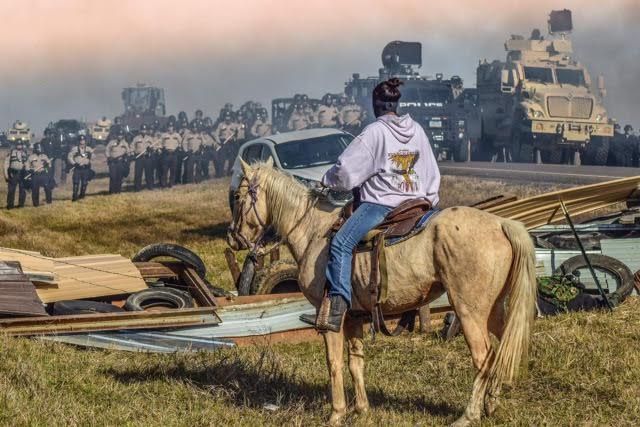 Starting in early summer, the Standing Rock Sioux tribe of North Dakota has been protesting the building of the Dakota Access Pipeline. This 1,172 mile pipeline would connect an oil refinery in North Dakota to Illinois, meaning big money for its developer Energy Transfer Partners. Energy Transfer Partners plans to tap into the Bakken formation, a huge oil deposit holding a possible 7.4 billion barrels of oil. It would carry 470,000 barrels a day across 4 states, reducing dependence on foreign oil and creating 8-12 jobs as well as 156 million dollars in tax revenue. Objectively, it seems like a golden deal.

However, there is one very large problem with this plan: the path of the pipeline lies right over the border of the Standing Rock Sioux reservation and numerous sacred sites. This fact has has not stopped it construction. Less than a day after the tribe filed a document describing one of their largest archeological finds in recent history, including 27 graves, 16 stone rings, and 19 effigies, the construction crew for the pipeline promptly bulldozed right over the site. Immediately, the Standing Rock tribe placed a restraining order on the crude oil company. Yet, when the judge reviewed the restraining order, he only allowed restraints to be placed on a section on the opposite side of the Missouri river where there are no known artifacts to be found. In July, the tribe filed a lawsuit against the U.S. Army Corps of Engineering, the main agency controlling the construction of the pipeline, stating the “[Army corps] failed to adequately assess the project’s environmental and cultural impacts.”. This lawsuit has still not been approved, and since then hundreds of protesters have camped out near the construction site. 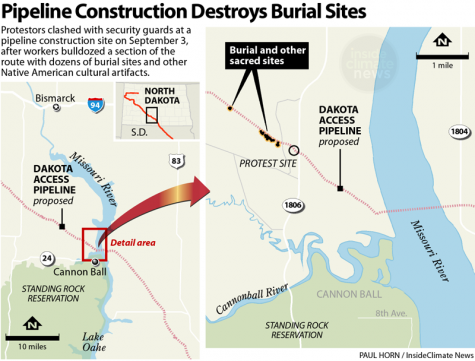 As the summer wore on, peaceful protests turned into violent demonstrations. On September 3rd, frustrated Sioux tribe members awaiting a court decision on whether or not to halt construction held a prayer meeting outside the closed off site. When a bulldozing crew drove to the scene to continue work, the tribe members climbed over the barbed wire fence and attempted to stop their progress. From here, the situation quickly spiraled out of control. Security guards used pepper spray and set leashed dogs upon the protesters. 12 people including a pregnant woman were bitten while 2 dogs and 4 guards were injured as both sides of the fight became violent. Protests continued as barricades were set up to block surrounding roads and the path of the pipeline, aiming to further hinder progress. On October 27th, 141 were arrested in a “final push” to remove the hundreds of demonstrators as police brought out armored vehicles, riot gear, and guns. In this protests as well a the many others leading up to it, participators were charged with counts of riot, resisting arrest, assaulting a police officer, reckless endangerment, and trespassing. The most recent update is that on November 3rd tear gas, pepper spray, and rubber bullets were used against protesters to get them to clear the area. A reporter by the name of Erin Schrode was even shot by a rubber bullet while interviewing a protester away from the action.

Part of reason for Standing Rock’s passion for this cause is their concern for the safety of the region’s drinking water. While the Midwest Alliance for Infrastructure stated “Once completed, the Dakota Access Pipeline will be among the safest, most technologically advanced pipelines in the world.”, even a technologically advanced pipeline could still experience technical difficulties. The chance may seem slim, but the price would be one too big to pay. Since it crosses through Lake Ohae, if the pipeline were to leak, it would destroy the surrounding environment as well as contaminate the main source of drinking water for surrounding states and the Standing Rock tribe. Many are also fueled simply by distaste for fossil fuels; while the Dakota Access Pipeline would be great for the oil business in America, it works against efforts to reduce our dependence on oil. Protesters believe that the pipeline is not only a danger to their water but in the long term, dangerous for the world.

The movement against the Dakota Access Pipeline has been aided largely by press coverage as celebrities like Shailene Woodley, Susan Sarandon, Jaden Smith, Mark Ruffalo, and even Presidential candidate Jill Stein join the protests. There is even footage of Jill Stein spraying painting a bulldozer before she is arrested. #NoDAPL has also been a hub for spreading news, photographs, and videos as the situation gets worse and worse, with hundreds of thousands of shares on Twitter and Instagram. This hashtag also became the slogan for a protest march through the streets of LA on October 23rd which had hundreds of participants.

As the pipeline continues construction but protests still rage on, the solution to this situation remains unclear. In a recent interview, President Obama stated “I think that right now the Army Corps is examining whether there are ways to reroute this pipeline.”, adding “We’re going to let it play out for several more weeks and determine whether or not this can be resolved in a way that I think is properly attentive to the traditions of the first Americans,”. However, the pipeline will near completed in a few weeks time, and rerouting an already built pipeline seems like a costly solution that is too little, much too late. In any case, it is clear that the Sioux will not be consoled by monetary compensation for their losses. Even as the issue comes to a close in the upcoming months, this injustice will not be forgotten for many years. It is possible that native tribes could swing their current hold on the public eye to other large issues facing Native Americans today; alcoholism runs rampant and many reservations have the poverty and standard of living of a third world country. The Dakota Access Pipeline will either fade into obscurity as a trivia fact on Jeopardy or go into the history books and it is the coming months that will determine that.