A quick Q&A with attendees at Hillary rally 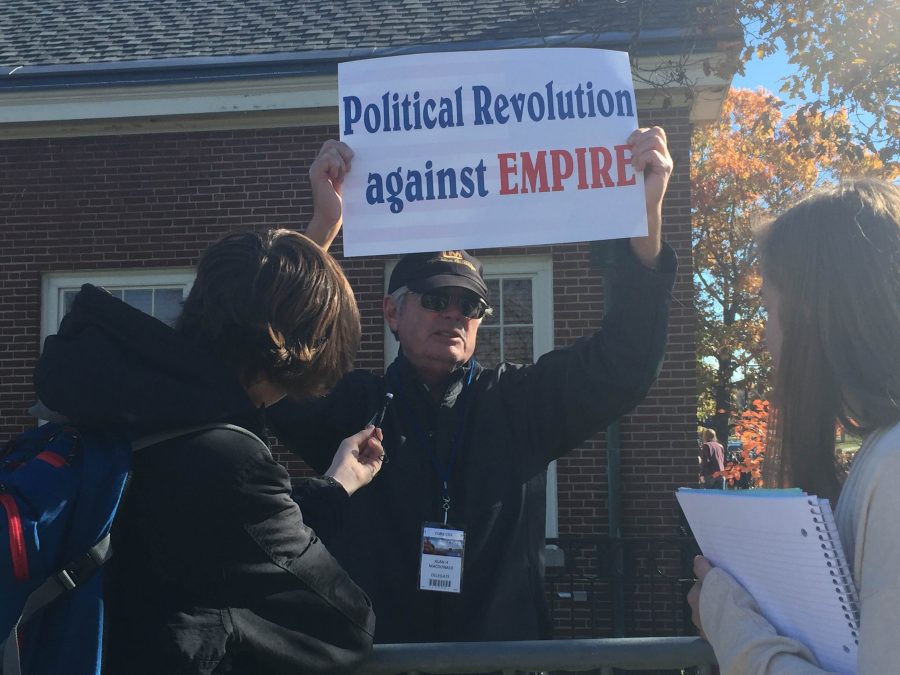 UNH Student
Q:Are you here to see President Obama or because this is a Clinton rally?
A: I would say specifically both definitely because of Hillary Clinton’s involvement in the Democratic Party but also because it’s the president of the United States — so I’d definitely say both.
Q: Is there anything specific you want to hear him talk about today?
A: Well definitely and obviously um who he is supporting–Hillary Clinton– I think that’s a big thing definitely trying to get to the general masses to say that they are, he is, supporting Hillary Clinton and I think he should address you know, why our vote is important. You know why us as students are a big and important role in this state of New Hampshire.
Q: If Obama were to run again do you think you would vote for him?
A: Absolutely yeah I do. I really do believe that he was a great president and I think that you know he did his best in what he did and he came in in a really hard time and that he addresses himself well and yeah, I would.
Q: Have you decided who you’re going to vote for?
A: Yep I sent in my absentee ballot and I did vote for Hillary Clinton..

Q: Oh okay, where are you from?
A: I’m from upstate New York
Q: Who do you think is going to win tomorrow?
A: Right now I think with the polls I think Hillary Clinton will be winning, I think that this next day will be interesting, but I hope and I do believe that Hillary Clinton will win.
Q: Do you have any advice for people your age who are still undecided?
A: Yeah um absolutely, watch the presidential debates it’s really interesting to watch the back and forth to see how they both handle themselves, how they address the problems, what they believe in, and how they plan to do that and put those things in place. Look at both sides, it’s really interesting, and it will help you a lot.
Jake Tucker
Q: Why are you here today?
A: I am attending today because I want to see President Obama
Q: Is there anything you want to hear him discuss?
A: Oh I don’t know I have no idea I just kinda want to see him ya know– he’s the most powerful man in the world
Q: If he could run again would you vote for him?
A: Yeah I would absolutely, considering the other two candidates I would
Erica-Lyn Plant

Q: Are you here today to see Obama or to support Hillary?
A: I’m specifically supporting both

Q: Is there anything you’re looking forward to hearing him talk about?
A:Um actually I just really wanted to hear him speak and have to hear about all the issues but there was nothing specific I was looking for, I just wanted to hear him speak before he was done being the president– not any particular issue.
Q: What is the importance of this being held at UNH?
A: Well I mean as you can see looking around here there are a lot of the younger aged voters. The really important thing to me, I mean I’m really in the same demographic just a little bit older. It’s so important that they get informed about this political process and about what’s going on, for some of these people it’s probably the first election they’re gonna be part of, it’s a very unique election. It’s actually not what I think most of them are like, or at least that I’ve experienced in my life, so hopefully this will bring a little more class to the whole thing.
Q: Have you decided who you’re going to vote for tomorrow?
A: Yes I have decided, I’m going to vote for Hillary.
Q: Who do you think is going to win?
A: I think it will be a hard race– I want to think Hillary is gonna win because that’s whom voting for, but this election has shown that nothing is given, nothing is predictable at this point.
Q: What do you think of the third party candidates?
A: I don’t really have an opinion on Jill Stein, I haven’t researched her enough. Um, Gary Johnson, I’m not necessarily someone who follows pure libertarian views, his lack of Syrian crisis was a little bit discouraging to me. So I’m sorry to say that that’s what threw it for me.
Q: Do you think third party candidates attract from the traditional Republican and Democratic Party system?
A:I think it’s important to have many parties. I don’t think that the two biggest parties represent everyone — I am personally am an independent voter, so I actually like having more options, I actually like seeing some changes in the party themselves as well. So yes I think it could be an issue but I feel like in the last few weeks the idea of getting out to vote for whatever you believe has been enough– I think it will help both candidates. I think people are getting educated enough that we don’t have to worry too much.
Barbara Daunheimer
Q: Are you here to see President Obama or to support Hillary?
A: I voted for Hillary Clinton over a week ago, so I’m here for both reasons.
Q: Are you interested in hearing him address anything specific?
A: I’m not really thinking about specifics I’m just really excited to be in the same room with President Obama.
Q: Do you know much about the third party candidates like Jill Stein?
A: Well I don’t know much, but I know I wouldn’t want a President who didn’t know about Aleppo.
Q: Do you think the third party candidates are specifically taking away from the republican or democratic parties?
A: I think it’s important to have a variety but in this particular election I really don’t think people are thinking too clearly when they say, “I’m going to vote for the third party candidates”. They’re taking votes away.
Q:What would you say to these people to persuade them to vote one way or another? Would you give them advice in any certain way?
A: Well it’s very difficult because people have a right to their own opinion, but I would say you know, “You don’t want trump do you?”. That’s would be my biggest thing to say, we can’t possibly have him as the president of the United States.
Q: Do you think it will be an easy loss for Donald Trump or do you think it will be a close race tomorrow?
A: I think it will be competitive. I hope and pray it will be Hillary, and I think it will be, but the electorate has surprised us before. 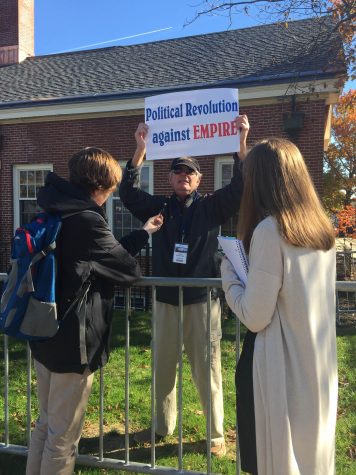 Q:What’s your reason for being here today?
A: Well to protest Obama shilling for Hillary. Uh which I’ve done multiple times with this sign, even to Bernie, which I enjoy doing more than doing it to Hillary– or Shillary. Bernie usually gives me a thumbs up on the people sign but he has never mentioned Empire the two by two sound bite campaign slogan, political revolution. But if you say political revolution, as any of you know, as good high school students, that’s not a full sentence. And it’s certainly not an active sentence, to be an actual sentence it has to have an object, “political revolution against Empire” is a complete sentence and an active sentence, but Bernie won’t do it — and that’s our problem, because Empire is the cause of all the little issues that the politicians talk about. It’s the cause of racism, it’s the cause of endless foreign wars.