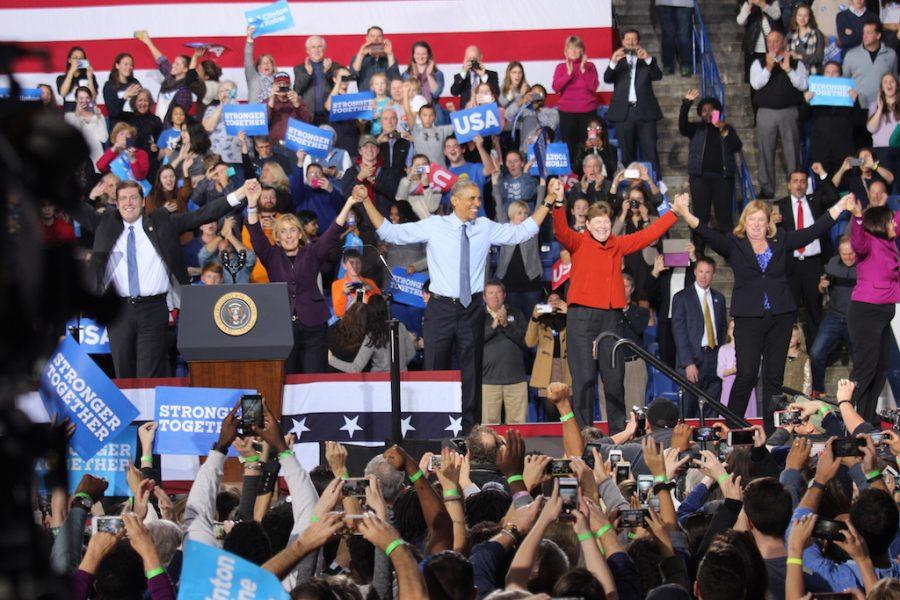 “Now after months of campaigning, the rallies, the ads, it’s in your hands!” Obama reminded people.

The atmosphere throughout the line, which was spread across the campus, was filled with anticipation and excitement for the day ahead. The main event of the day was hearing President Obama speak, but it also included appearances from Congresswoman Annie Kuster, Colin Van Ostern, and many other important people. The line which began at 9:30 had to wait until 1:00 when they started to let people into the facility. The stadium was quickly filled and the band provided entertainment while everyone waited. The actual event, held in the UNH indoor hockey arena at the UNH campus, didn’t start until 3:00.

The first speaker was Ken Burns who spoke of how Donald Trump, “Threatens the veterans and insults the handicapped” and of how Hillary Clinton, according to President Obama is, “the most qualified person ever to run for president.” The next speeches were from husband and wife, Mark Kelly and Gabby Gifford. Mark spoke of how Senator Clinton is “the champion that we all need” and of how Donald Trump “is not a champion and he is not the champion we need.” He also talked of New Hampshire’s role in the election and that “We are getting ready for launch day tomorrow and New Hampshire needs to be the launch pad that puts Hillary Clinton and Tim Kaine into the White House.” Gabby Gifford stated that, “Come January I want to say these two words, Madame President.”

The next person that spoke was Congresswoman Carol Shea Porter. Congresswoman Porter told the packed arena of how “Democracy is not something we have, it is something we do” and that you need to go out and vote in order to “save the country tomorrow.” She spoke to more of the fact that you need to vote when she said, “7 billion people are holding their breath over this election and they can’t do anything, but we can.”

Another Democratic politician is Colin Van Ostern who is running for New Hampshire Governor. Van Ostern quoted president Obama on some things that he said during his campaign in ’08, “We don’t live in a liberal America or a conservative America or a black America or a white America, we are the United States of America, we are one people” and “they (Selma civil rights activists) marched so that we could run, and we must run so that our children can soar.” Van Ostern ended his speech with the idea that, “Stronger Together is not just a campaign’s motto, but the motto of the United States of America.”