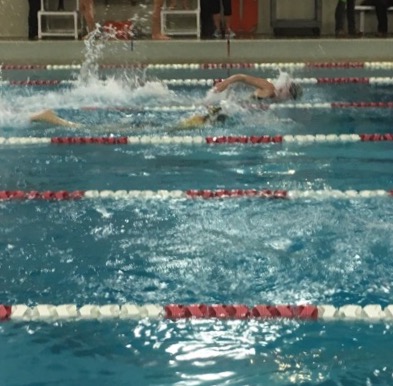 The first race of the year was the 200 medley relay. The girls swam first, and Souhegan had three relays entered. They placed sixth, third, and first. The winning girl’s relay consisted of Alexa Leary (freshman), Mary Rego (senior), Tess White (junior), and Bella Geskos (sophomore). On the boys side, Souhegan had one relay which placed second to Keene. This relay consisted of Drew Whitney (senior), Connor Donoghue (freshman), Tom Lipkin (senior), and Luca Guerrini (junior). Way to go!

Among some of Souhegan’s strongest events were the 200 freestyle, 200 im, 500 free, 100 breastroke, and the 400 free relay. In both the 200 freestyle and the 200 im, the top three finishers for girls were from Souhegan. In the 500 free, the boys had finishers in first, second, and fourth place. Then, in the final event of the night, the girls had three relays entered in the 400 free relay which placed first, second, and third. The boys relay came in second in their event.

In high school swimming, swimmers have to qualify for the state meet in February by beating a certain time in an event. Already after their first meet, the Souhegan swim team has eight swimmers qualified! Coaches Dan Daudier and Michele Donoghue are trying to get the most amount of people they can to qualify for states.

The first meet was very successful for the Souhegan swim team! Since then, they have had two other meets. Their next one will be held in Portsmouth on Saturday, January 7th. Good luck!