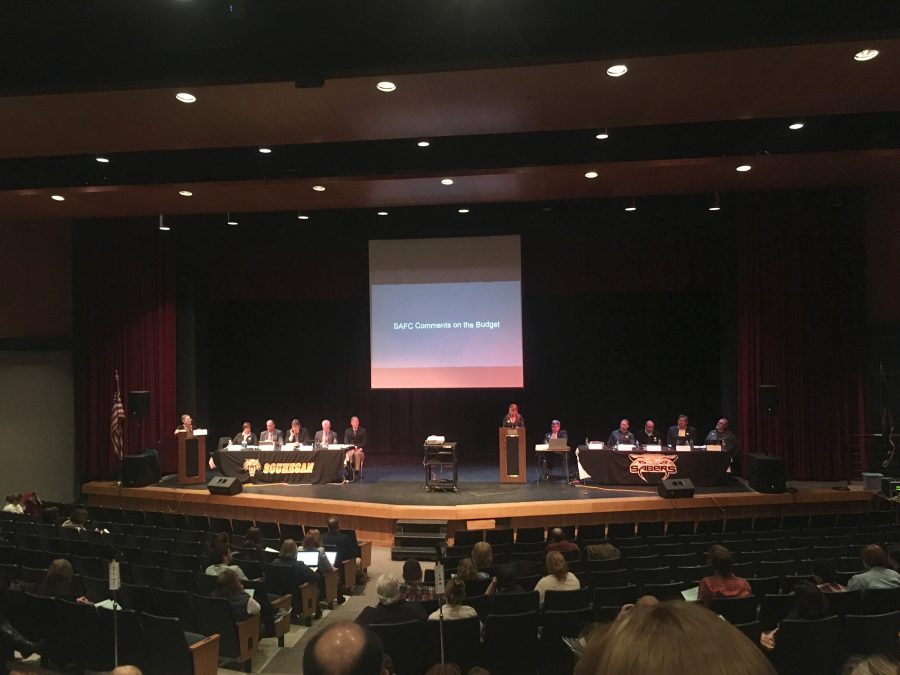 February 6th, 2017- Citizens of Amherst gathered in the Souhegan High school auditorium for the annual deliberative session. The crowd was scarce by comparison to last years, but the in depth conversations made up for it. Spotlight was quickly casted towards the towns rising taxes, due to unforeseen budget increases. The school board and administration explained that keeping a close watch can only due so much, as recent increases have been unexpected, causing the incontrolable additional spending.

Focus stayed on the explanation, discussion and debate of warrant articles 2 through 5, which all relate back to the school’s budget. The school board proposed that the Souhegan high school budget be raised to $18,014,642, which is a $365,782 increase from the FY17 budget.

A few strong objectors, like Linda Kaiser, a 32 year Amherst resident, felt that the proposed budget was just wrong. “ It’s just sadness more than anything,” she said, “The school budget increases pose a threat to current homeowners, as their taxes are steadily increasing. It’s just not okay. That’s why I showed up tonight, and that’s why I tried to amend this because I think that’s just disgusting, I don’t know what else to say. It’s just not fair.”

This budget was carefully crafted by the administration members and school board, who work tirelessly to keep the SAU 39 school system working so smoothly. They keep a close watch, working hard to make necessary cuts and decide on extra spending. The deliberative carried on for more than 3 hours, consisting of questions from the audience to the school board and administration, in addition to the strong conversation carried on between Amherst residents. Some shared how much Souhegan has positively changed their life, while others took their time to say how they were being negatively affected by the tax increase. Both sides had strong points, but when the time came to actually vote, the schools proposed budget become final.

Teri Behm, an Amherst resident, said “I respect both sides, and I know that this board has worked really hard to try and come up with something to work with everyone, and it’s not an easy job. We still want to have great schools, and they’re trying their best to make sure that can happen and we can afford them.” Behm supports the school’s new budget, and is running for a position on the school board in March.

Dwayne Purvis, a well respected school board member says “We are the best valued public school in the state, and I’m confident that we’ll continue to be.” Purvis wasn’t in favor of the proposed budget, but well summarized the night, “We still live in the same little town, we’re still neighbors, and I’m going to love everybody anyway.”