Come On and Slam! (Why Spoken Word Poetry is Important) 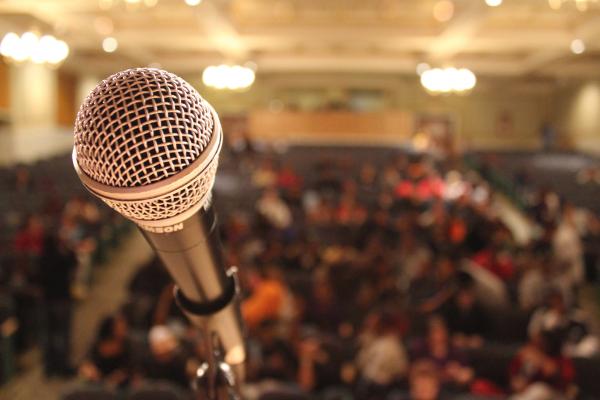 Slam poetry. Maybe you’ve heard the term before, whether in passing or in the context of pretentious art school students with colored hair; perhaps you’ve seen online videos of people standing in front of a microphone and reciting their own work to an intently listening audience. It’s been gaining popularity recently, with “poetry slams” popping up everywhere from Canada to California to New Hampshire. But this art form, while niche, has been around for a while- and it seems that spoken word poetry is here to stay.

In November of 1984, poet Marc Smith started the first slam poetry contest at the green Mill Jazz Club in Chicago. But spoken word poetry began even before that. Poetry began as an oral tradition- the earliest discovered poems were meant to be recited or sung as a way of remembering things like history and genealogy. One can trace the roots of modern slam poetry back to the Beat poetry and Negritude poetry movements. Negritude was a literary movement created by the fading of the Harlem Renaissance, where Black artists promoted a sense of pride surrounding their race and their culture and rejected European colonization.

Beat poetry questioned mainstream politics and culture, with poets breaking free from literary tradition and fighting against social confines. In the 1990s, spoken word poetry became more popular as the media picked up on the unique art form. A documentary called Slamnation (which covered the 1996 National Poetry Slam) and the HBO series Def Poetry helped slam poets gain exposure and introduced slam poetry into modern media. Still, slam poetry has achieved that which in the age of the media has made nearly impossible- relative obscurity. While it has certainly gained a cult following, many people outside the literary and art world have yet to hear of spoken word poetry.

But what’s the appeal? What’s the point?

Like every other art form, spoken word poetry is a form of self-expression. Slam poets come from all walks of life, each with different experiences and feelings that make their work entirely, beautifully unique. Storytelling finds a new form in slam poetry, recalling the origins of oral history. Slam poetry is also steeped in social activism. Today’s modern rebels use pen, paper, and the stage to plead for change and progress. Feminism and gender equality, stories of racism and calls for peace- poetry is the most eloquent form of revolution, and slam poetry is an in-your-face, explosive genre with a lot to offer the aspiring activist. Slam poetry is an experience that ranges from competitive to championing for change to telling a story- and I believe that anyone can join in. Perhaps the importance of this art form can be best expressed by this phrase from poet Ankita Singhal: “I am a master of my spoken words, and a slave to those which remain unspoken.”