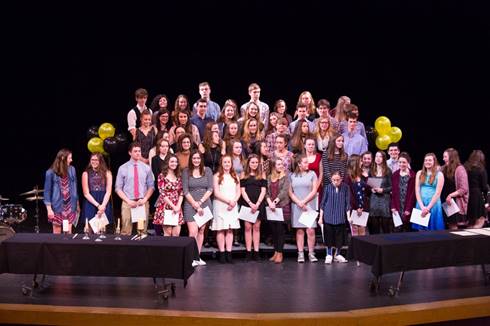 On Tuesday, March 28th Souhegan inducted fifty-seven students into its chapter of the National Honors Society. This organization recognizes students with exceptional scholarship, character, leadership, and service. There is a GPA requirement to be inducted, along with an application process. The inducted students have at least a 3.6 GPA and have been reviewed by a faculty panel for their outstanding leadership, character, and service along with their academics. The 2017 inductees are as follows: 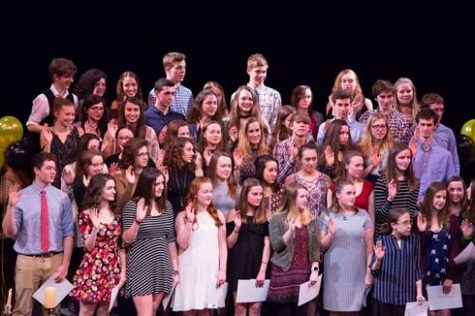 Also recognized during the night were the Sociedad Honoraria Hispanica inductees and the Societe Honoraire de Francais inductees. The Sociedad Honoraria Hispanica is the honors society for students who take Spanish and is meant to recognize the members’ achievements in the language. Students are asked to apply if they are currently in or above Spanish 3, have an A average in all Spanish classes taken, have an overall B average, and have never failed a class due to attendance. If a student meets these requirements, then their applications are reviewed by the Spanish Department. These are the 2017 inductees:

The Societe Honoraire de Francais is the honors society for students who take French as their language. These members also apply and are selected by the French Department. The purpose of this society is to recognize students for their scholarship in French and also promote high enthusiasm for the language. The 2017 inductees are as follows:

Congratulations to all new inductees!