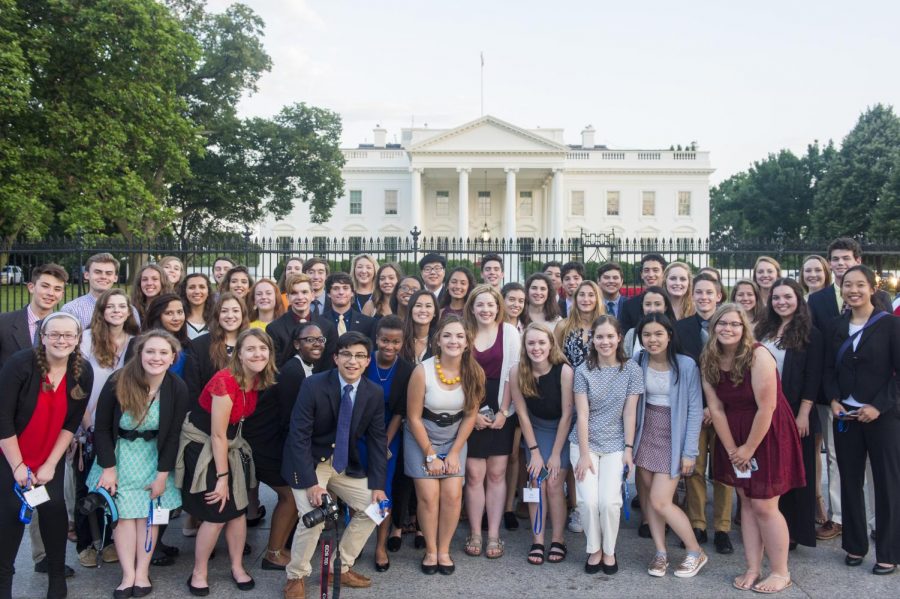 The 2017 scholars stand in front of the White House. (Photo courtesy of the Newseum)

I stood on the balcony of the eighth floor of the Newseum, on Pennsylvania Avenue, in the heart of Washington DC. From this spot I could look out and see the U.S Capitol, the National Archives, and the Washington Monument. I had only been in DC for twelve hours, yet it was already starting to feel like I was home, even surrounded by fifty strangers. It was my first night at the 2017 Al Neuharth Free Spirit and Journalism Conference. Earlier that day I had flown alone for the first time, found my way to my hotel, and unsuccessfully tried to remember the names of all the people I met. It had been a crazy day, and I knew  as the week went on the days would only get crazier, but I loved every minute of the crazy.

The Al Neuharth Free Spirit and Journalism Conference is a five day all expenses paid conference in Washington, DC for rising high school seniors interested in the field of journalism. The conference selects one student from each state (and DC) to attend, and as well as being awarded a spot in the conference, a $1000 scholarship is given to each scholar. While there, students get the opportunity to explore the field of journalism, connect and learn from professional journalists, and be inspired by people who had created change.

I had a chance to see a variety of journalism during my time in DC. We explored broadcast journalism, watching a filming of Meet the Press by Chuck Todd at NBC Studios, and having a Q&A session with him afterwards about how to get started in the journalism field. The most memorable piece of advice he gave was advising us not to solely major in journalism. This was initially shocking coming from a journalist, he justified it by saying you should double major, or have a major and a minor, with the topic you are interested in writing about whether it be political science or biology. After hearing his explanation, that actually made a lot of sense and it was in that moment on the first day I realized how truly unique this opportunity was, I really was learning from the top journalists in the industry. Throughout the rest of the week I continued to learn whether it was learning about print journalist at USA Today, talking to the various professionals I met at the 2017 Al Neuharth Award for Excellence in the Media, learning about the legal matters of journalist with lawyers and judges at The US Courthouse, learning about political journalism on Capitol Hill, or even learning about how to improve my high school paper from the person sitting next to me at breakfast. I made endless connections that week and I met so many people who inspired me to keep writing in my future.

One of those people was Sara Ganim. She was one of the youngest people ever to win a Pulitzer Prize in 2012 for her reporting on the Penn State scandal, and she had great advice for all of the students who eagerly sat waiting for her to talk. Her main message was to keep an open mind when writing. Do not get caught up in going to a big school, go somewhere where there are good people who will help you get opportunities. Do not go into a story with tunnel vision expecting a certain outcome, talk to people because that is the best way to discover the truth. She also talked about digital journalism and how changing technology is changing the way that people report on issues starting, “with changing technology the deadline is always right now.” However, what surprised me the most about Sara was her humbleness and sincerity. This woman has won a Pulitzer Prize, worked for great news organizations, and is a globally respected reporter. Yet, here she was taking time out of her day to talk to a room full of high school journalists and actually listening to our questions, providing thoughtful answers. This was something that continued to shock me as I met more people throughout the week like Marty Baron, the editor of the Washington Post, or David Fahrenthold, a 2017 Pulitzer Prize winner. Being taken seriously by successful journalists I met that week really made me feel like I was a part of the journalism family, however it was not just the professional journalists who gave me as sense of family.

This article would not be complete without mentioning the other fifty kids who shared the experience with me. I met fifty new people in the span of five days and I made a connection with every single one throughout the week. Being from a small town, it was amazing to hear stories from all over the country about issues they had to face, or problems they had overcome. Going to the conference I expected to talk to new people, but I never expected to leave with new best friends from places as far as Arizona, Utah, and North Dakota, or as close as Maine and Vermont. I never expected to know that wherever I end up, I would have fifty people who wanted to help me succeed. At the end of the week I stood looking at a view of DC, just like I had from the Newseum the very first night, except for now I looked at DC a little differently. Instead of seeing a strange new and intimidating city, I saw a place that had become a second home to me.

If you are interested in applying for the 2018 Al Neuharth Free Spirit and Journalism Conference applications are now being accepted. Visit this website for more information.