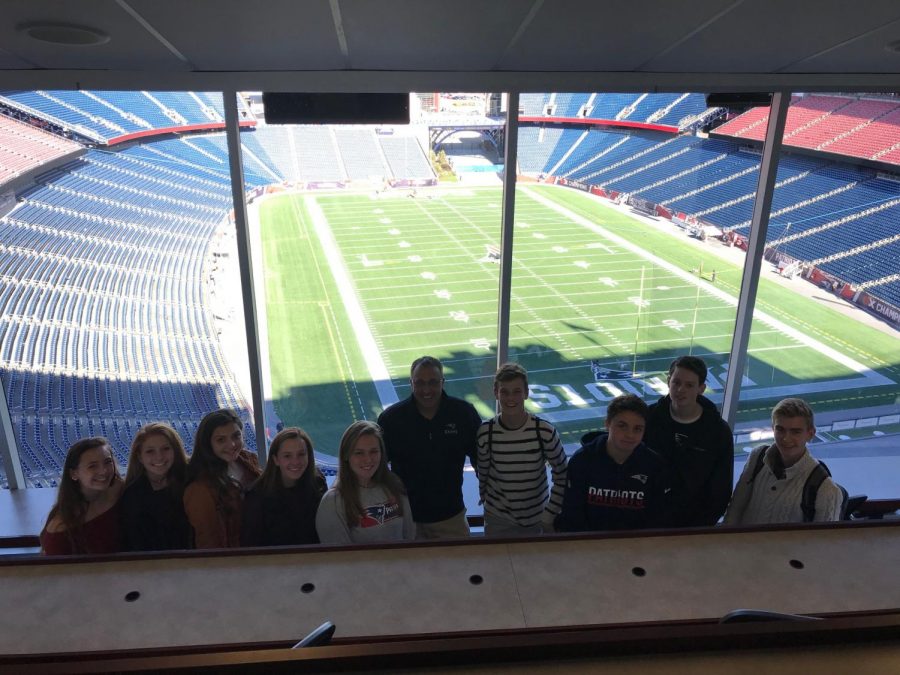 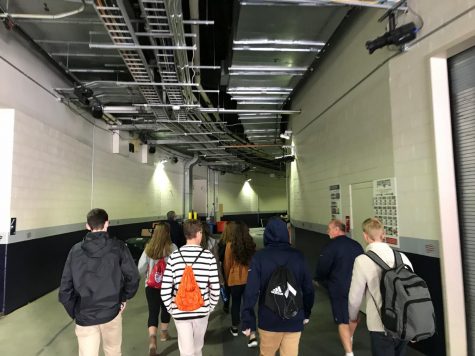 When I agreed to go on this field trip, I assumed we’d be stuck in a room at Gillette Stadium listening to some uninteresting person drone on all about sports writing, but I’m a teenager, and I’ll take any chance I can get to not  go to school. However, once I arrived I knew I was in for something special.

I was one of ten students from his Saber Digital Magazine class and The Claw to visit Gillette Stadium to attend a workshop on sports writing. When we arrived, Bryan Morry (https://www.thehallatpatriotplace.com/about/staff/), met us outside of Patriots Hall. Morry led us through the underbelly of the stadium. As we passed by the locker room everyone’s footsteps slowed, waiting and wishing for Tom Brady to emerge. Although he didn’t, Morry gave us direct instructions that even if we did see a player, we were not allowed to say anything. Full of disappointment, we hopped on an elevator and went up to the press box to see where all of the sports articles are written. 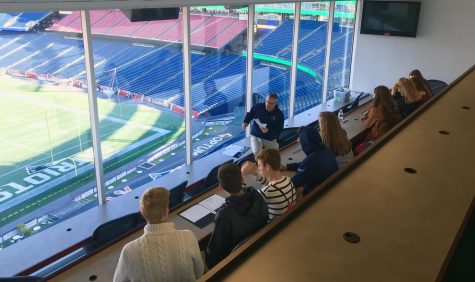 The press box showcased an amazing view of the whole field, and our spirits seemed to rise again.  Although Morry seemed like just your average guy, we came to find out that he is much more important than we ever expected. He worked for the Patriots for a total of 20 years. First he worked as the editor of the Patriots Football Weekly  from 1997 to 2005 and traveled with the team, then, left for two years and worked as the afternoon drive sports talk show host on the Score AM/FM. In 2007, Morry was asked to come back to be the executive director of the New England Patriots Hall of Fame. He also covered the Patriots first three Super Bowl wins and went on to write the book “Patriots United – The New England Patriots World Championship Season.”

Morry spoke to us about the process of sports writing. He explained that rough drafts are written in real time, as everything plays out, and then once the game ends the writers interview the players and the coach. They proceed to rewrite their entire article based on how the game turns out and then add in the quotes. They have to stay at the stadium until they are finished, no matter what time that is. 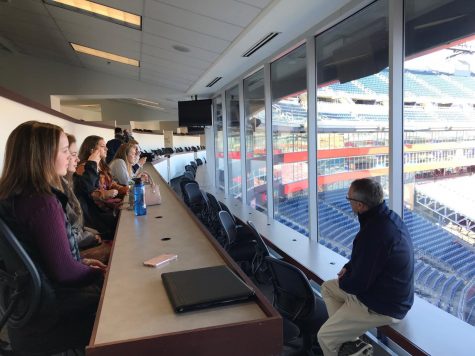 After explaining the process to us, he gave us folders filled with stats, quotes, and the overview of a previous game. We split into two groups but wrote about the same game. The first group had to create a write up of the game focusing on the Atlanta Falcons and my group wrote a script for broadcasting focusing on the Patriots. We worked for about half an hour, although it was hard to concentrate considering the great view of the stadium.  We then proceeded to present our writing to him.

Morry told us that we’d done very well capturing the game and understanding that different medias write about the same game differently based on who their audience is. For example, starting their articles with The New England Patriots Won vs. The Atlanta Falcons lost.

After the workshop, we got to visit the Patriots Hall interactive museum. The museum is a two floor, self guiding tour above the pro shop. The first floor was interactive and allowed for us to try on uniforms, test out our vertical jump, and see if we weighed enough to be on the team. The second floor showcased the first football ever used and New England Division 1 high school championship football teams’ jerseys.

Overall, the experience was incredible and I learned a lot about a topic that I previously knew nothing about and I hope to use in the future.