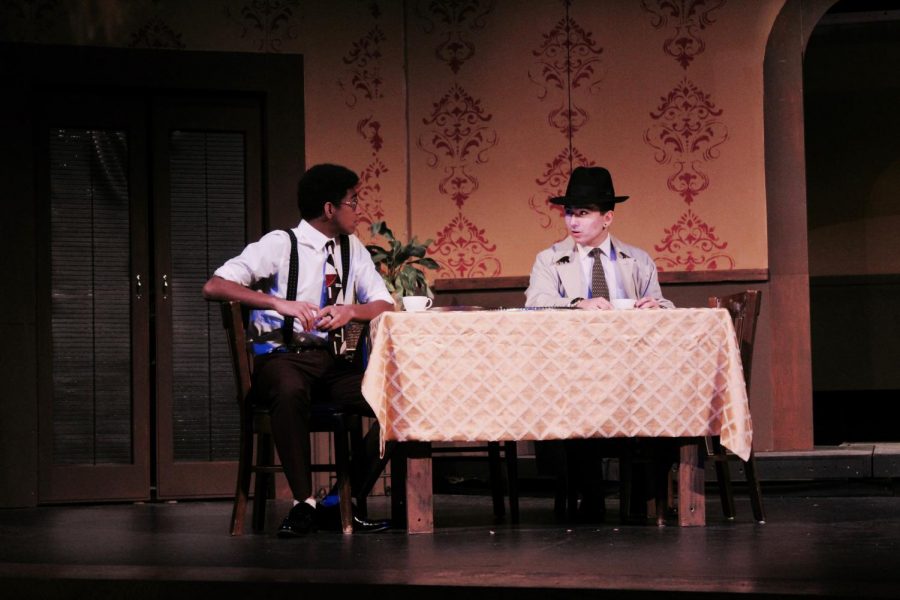 This Friday, November 17th,  Souhegan’s drama club opens their newest production of Murder’s In The Heir.  As the cast and crew put the final touches on the show this past week, I had the opportunity to sit in on one of their dress rehearsals. I was cheerfully welcomed by the director of the show, Jen Stover.  She explained the basic concept of the show, ” The show is similar to clue in that we have some very stereotypical murder mystery characters who are larger than life.  There’s a murder and the audience is going to vote for who they think is the killer.”  As an actress I was wondering how you could rehearse a play where the audience decides the ending, which could be different depending on votes.  When asked about how to prepare the cast for multiple endings she replied, “We have 8 possible murderers, which has been interesting because 8 different characters need to rehearse their endings which are all similar but with slight adjustments depending on their personality. ”

With such a complex plot and characters this cast has been very hard at work perfecting this show for audiences.  The talented SHS students that make up this cast are from all grades 9th through 12th.  For a portion of the cast, this was their first year in the drama club and SHS. When talking to those freshman newcomers about their experience they said ” At first we were nervous about even making it into a high school show with such a small cast but everyone was so welcoming and made us feel like we belonged.” They all strongly encouraged fellow students and any incoming freshman interested in theater to come out for the next auditions.

After having watched this production I highly recommend going this weekend to support your fellow student actors putting on a great show.  You won’t want to miss this nail-biting mystery that will make you laugh but keep you on the edge of your seat.  Thank you to the entire cast, crew and directing team for allowing me to sit in on their rehearsal!  This show runs November 17th and 18th @ 7:30pm and 19th @ 2:30pm.  Tickets can be purchased in the Welcome Center, Moulton’s, Black Forest Cafe, The Homestead.