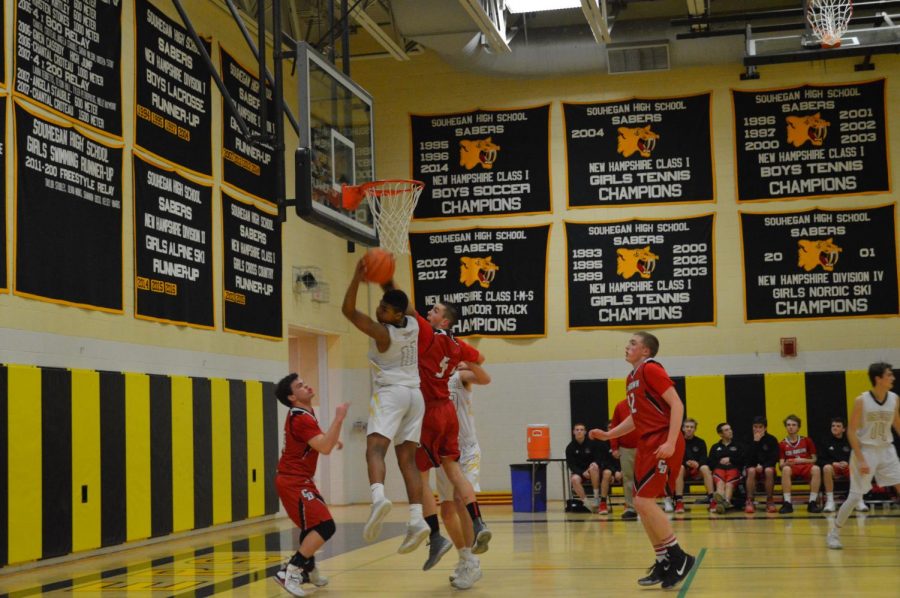 After a rough start and winning only one of their first three games, the Souhegan Boys Varsity basketball team has bounced back led by steller play from Senior guard Anderson Geffrard. Geffrard has led the Sabers to four wins in their last 5 games and has the team 9th in the standings.  The hot Sabers look to continue their sucess as they advance closer to the playoffs.

The Sabers began their season with two heartbreaking losses to their bitter rival Milford, a win vs Pelham and a loss to Merrimack Valley. It was not until January 9th, in a tough game against Manchester West, where the Sabers would turn their season around.

The Sabers welcomed in Machester West with a mission to protect their home floor and made a statment winning 70-58. Just three days later, the Sabers traveled to Hannover and grabbed their second win in a row 65-48. After a tough loss to Hollis-Brookline 46-70 the Sabers rebounded with back to back wins against Pelham and Coe-Brown.

In the game vs Pelham, Geffrard scored 35 points and completed the season sweep of the Pythons while in the game vs Coe-Brown four Sabers scored in double figures led by Geffrards 21 and Max Leonards 14 and handing Coe-Brown just their third loss of the season.

Geffrard and the Sabers have a long road ahead of them as they look to continue their recent sucess. The Sabers have clearly proven that they can compete with some of the best teams in division II such as Coe-Brown and overcome adversity. If the Sabers continue to put the work in,  the 2017-18 Sabers will make some noise this post-season.