Students Across the Nation Participate in Walkout 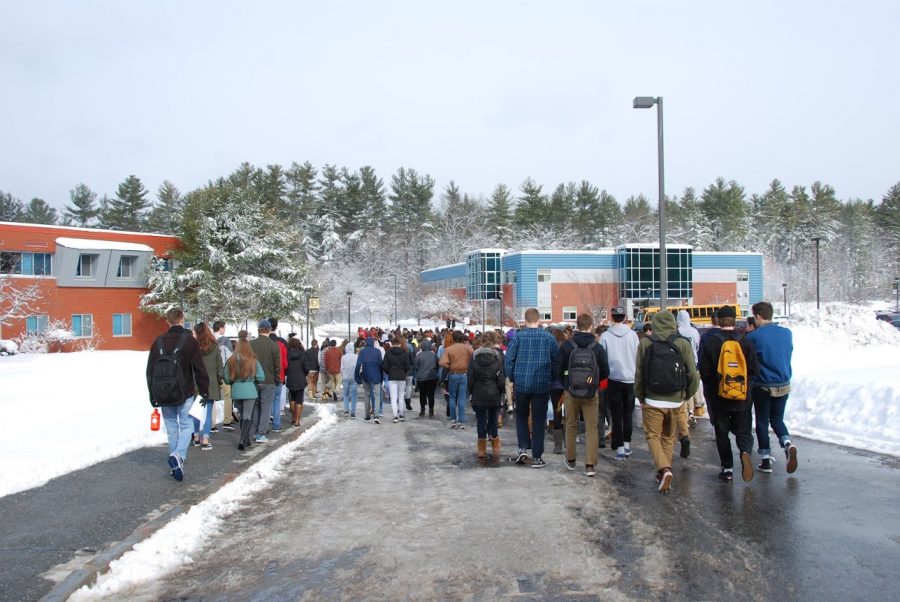 On March 14th, thousands of kids from all over the nation participated in a walkout to show unity in remembering the seventeen victims of Marjory Stoneman Douglas High School shooting that took place exactly a month prior. While some schools planned the walkouts to ask for better gun control, the students at Souhegan made it very clear that they didn’t want their walkout to be about politics.

The walkout was organized by three seniors, Erin McCool, Cayley Barry, and Ben Wesenberg. When the students started planning the walkout they decided early on to make it more of a memorial than a political statement. The goal of the walkout was clear, they wanted to accomplish two things. First, to honor the victims of the shooting a month earlier and all other victims of school shootings. The students of the MDS High School shooting were the same age as them. SHS students could relate to them and see parts of themselves in the victims and survivors. For this reason, the second thing that they wanted to accomplish was to ask for safer schools whether that comes from gun control, allocating more resources to mental health in school, or another approach. Nobody should ever have to fear for their life in school and these students are trying to make sure that that never happens again.

The walkout started at ten o’clock nationwide. At this time, students wishing to participate walked out to the bus loop area. Once everyone had gathered there, they walked as a unified group to the path between the annex and the main building. There they would have a seventeen-minute long moment of silence, one minute for each victim of MSD High School. For those who were worried about the student’s safety during this event, the school had the students safety as a top priority and stationed extra police on campus, one officer at every entrance to the school.

At the end of the moment of silence, Wesenberg read of the names and ages of the seventeen victims. Then Barry read a statement to the crowd. In the statement, she thanked everyone for participating asked the students to look around them stating, “This is the future. We are the future. If you are passionate about these issues beyond this walk out, inform your families, friends, classmates, relatives, coworkers, social media followers, spread the word as much as you can” She went on to inform students of others ways that they could make a difference, including raising awareness, reporting suspicious activities to the police, attending the March for Our Lives on Saturday, March 24th, writing to congress, contacting the National Rifle Association, registering to vote, and most importantly making sure that their voices were not being silenced. She ended the walkout perfectly by encouraging the students to do just that, saying, “We are not too young, we are educated, and we need change.”

After the walkout, I heard many people wondering why the students choose now to organize. All school shootings have been a tragedy, but what about the MSD High School shooting pushed them over the edge. For many, it was just one too many. High-school-aged kids have been alive for seven of the ten deadliest mass shootings in US history, six of the seven which were in the past six years – yet, we are only 18 years old at most. Another reason this shooting resonated with us because the students of MSD High School were our age, we could see ourselves and our friends in them. We saw their videos and heard their testimonies on social media. They reached out to us and asked us for help. Every student who marched out had their own reasons for marching, but these are the things that pushed us over the edge and made us realize that it was time to demand a change.