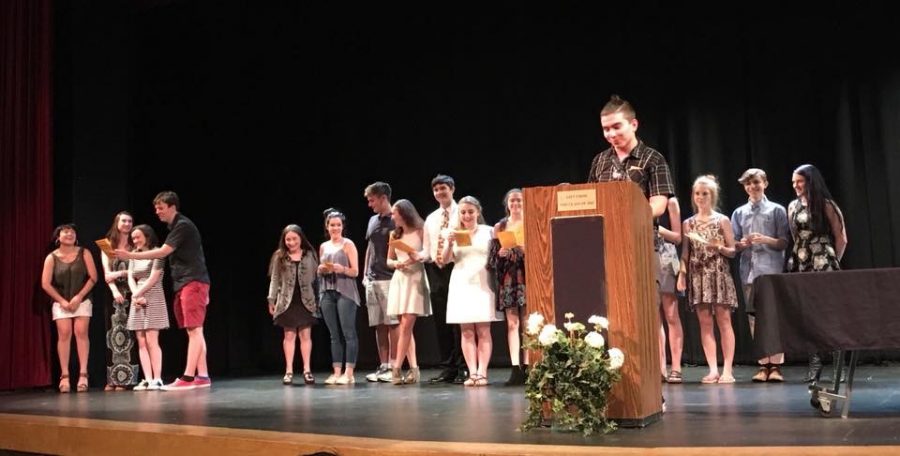 After a very successful year of theater here at Souhegan High School, the Drama Club hosted their Awards Banquet to commemorate their hard work.  Students that had participated in cast and crew were present, as well as those who are apart of the International Thespian Honor Society.  The banquet began with a thoughtful introduction speech by senior, Helen St. Cyr, followed by director Jennifer Stover.  Awards were given to those who stood out among the very talented students in either cast or crew.  The Break-Out Role Award was given to Makayla Ratta and Matt McCann for their outstanding efforts in their roles on and off stage. Shooting Stars Award was given to Serina Severini, for her amazing photography work and Christos Nassiopoulos, for his star quality performance as everyone’s favorite Prince Charming.  The Creative Force was awarded to Kate Eastland, for her talents in the hair and makeup crew and Cayley Barry, for her creative work when taking on the role of choreographer for last year’s musical. The Spotlight Award was given to Xanna Bader and Joe Guzman for truly shining this year on the stage.  The Team Player Award was given to Mitchell Jacobs and Katie Giannakopoulos for always being their for their fellow thespians.  Lastly, the Leadership Award was given to Melissa Field, for her constant dedication to her crew and Helen St. Cyr, for always being the leading example for her casts.

Afterwards, all the eligible members of the Drama Club were inducted into the International Thespian Honor Society by a senior member.  All new inductees received a certificate and pin to represent their participation, as well as a heart felt speech from their specific senior.

During a brief intermission the members voted on a ballot for their new Troupe Officers.  Lucy Stover was chosen as the chapter’s President, supported by Kelly Fresca as Vice President.  Evmorfia Alton was selected to represent the Troupe as Secretary and Alyssa Saunders was chosen as Historian.  These four will lead the SHS International Thespian Society for the upcoming year.  After revealing the ballot’s results, the Troupe Officers with Jennifer Stover, announced the fall play, Almost Maine by John Cariani!

Katie Giannakopoulos and Alex Dube shared their kind thoughts as they reflected on their time in Souhegan’s theater program. Later on, a slideshow of good memories put together by Serina Severini and Joe Guzman was shown as the seniors took their final bows and received their Honor Cords on stage. This year’s senior class will be dearly missed by all who had the opportunity to work with them or admire them from the audience.

If you are interested in any aspect of the Fall Play, Almost Maine, information sessions will be held September 10th and 11th in the theater, 3:15-3:45.  Auditions will be help September 17th and 18th, estimated to be from 3:15-6 (tbd).   The Fall Play show dates will be November 16th,17th at 7pm and 18th at 2pm.  Rehearsal schedules are flexible with Mondays and Wednesday, some weekend time.  Anyone involved in Fall Sports will be able to communicate with the directing team if they are concerned about conflicts.  We hope to see you there!