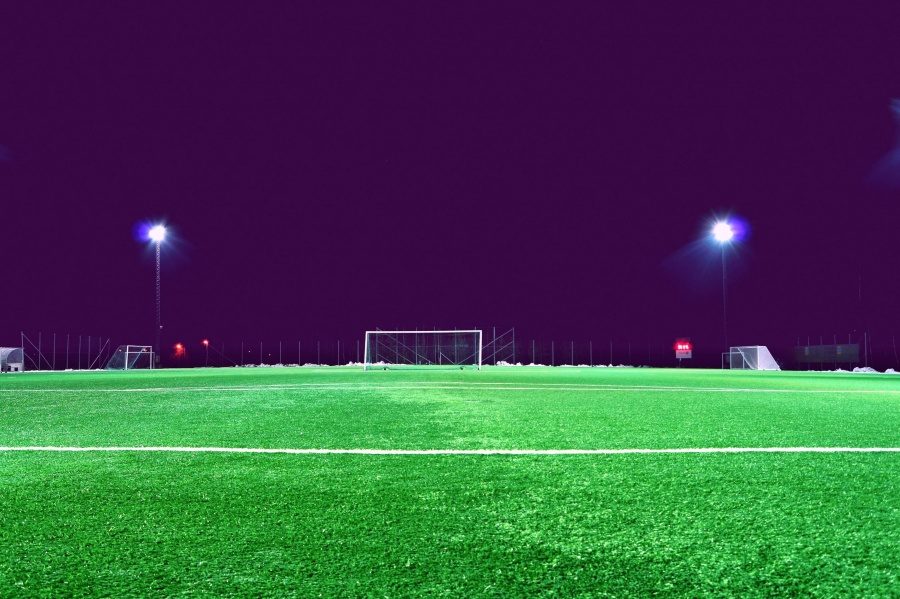 The setting couldn’t be more ideal. Two rival teams showing up on a chilly Friday night to battle it out under the stadium lights with a crowd full of supporting fans. It was as if both teams anticipated this moment all season. As warm ups were underway, Souhegan was showing some serious potential with star goalie Ethan Ramm leading the pack alongside Evan Loconto and Tristan Colby in the back field. Coming in with similar records, both Milford and Souhegan teams came to play, and the fans knew it.

As the coin toss was won by our very own Souhegan team, Milford was quick to show their skills. An early goal scored by Milford’s own Paxton Ducharme in the 9th minute caused a disturbance in the crowd, but Souhegan never lost their momentum. As if retaliating immediately, freshmen Chris Weeden scored just 7 minutes after, bringing Souhegan back to 1-1 tie in the first half. Buried in the back of the net, Chris was able to knock the ball in after a dropped ball by Milford’s goalie Riley Hanson, sending the crowd into an eruption of cheers. After the goal, Milford knew that no matter how fast they scored, Souhegan was right there willing to fight back even harder.

As stated previously, Souhegan fought back even harder because just 10 minutes later, Mike Estabrook was able to find the back of the net on a 1 on 1 with Riley Hanson, rocketing the ball into the bottom corner of the goal. As the rush of adrenaline and excitement hit Souhegan’s starting 11, the crowd was quick to hush one minute after as Ryan Thompson of Milford assisted Connor Sullivan to make the game an even 2-2. As the first half came to a close soon after, Souhegan primarily dominated the central midfield with sophomore captain Ethan Lim controlling the pitch. The talk within the huddle consisted of, “Let’s keep it up, you can’t make any mistakes. We have to keep the momentum going” said Ethan Lim. And he was absolutely right. Spirits from the team were running high as Milford remained intimated by the chemistry of the back 4 defenders and the midfield, closing off an chance of ever getting by. Souhegan had finally created the most ideal formation, and it showed.

As the ball was kicked off at the start of the second half, Souhegan’s very own Alex Lin from the outside defending position consistently penetrated Milford’s attacking third, opening up many scoring chances for Souhegan. Noah Matthews from Milford brought the game to a 3-2 lead for his school in the 68th minute. But, again, Souhegan was quick to retaliate. The intense hard work from Alex payed off as he assisted Miles Drum in the 72nd minute, making the game an even score of 3-3. The crowd was ecstatic. They chad come to watch a great game, and Souhegan was presenting an unforgettable moment for the fans. Despite the cold, fans beared the weather with blankets and sweatshirts, showing their support for their school by remaining motionless in the cold bleachers. A real sight it was for the players, watching their “Friday night lights” game turn into a spectacular high school memory for both teams. As the scoreboard hit the 2 minute of stoppage time, both teams knew where this was going. Overtime. Luckily, the fans were not too upset to bear the cold for a little longer! The players sat anxiously as half time came to a close, knowing all too well that neighboring town Milford was not letting up. There was no room for mistakes for Souhegan’s starting 11 squad. It was time for Souhegan to park the bus and close off a much deserved victory over Milford.

Overtime was in session, and both teams failed to create a scoring opportunity to end the game. As the shortened first half came to an end, another 10 minutes were added to the game clock for the chance to score the “golden goal”, the deciding point in which the first team to score in overtime wins. A devastating turn of events occured for Souhegan as Milford’s Colby Kolk found the back of the net, unassisted. The referee blew the final whistle as Souhegan sat in defeat on that cold Friday night. The game was over, and Milford finished victorious over Souhegan. As for the players, their attitudes remained positive, holding their heads high as fans congratulated them on their efforts. “It was a great derby match” said long-time Boys Soccer coach Dave Saxe after the match. The game was nothing short of spectacular, leaving fans and players standing up from the sidelines, anxious about each scoring opportunity. The support of the fans and parents that night was nothing short of uplifting for the players. A great battle it was for both teams, no question. Both teams gave it their all, and everyone attending the game was so proud to watch such an exciting game unfold between the rivaling teams.