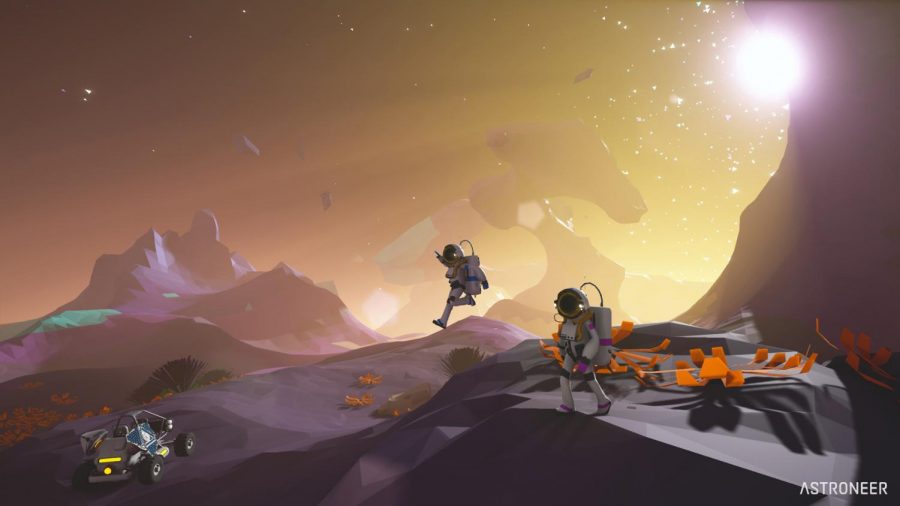 ASTRONEER is a sci-fi adventure-exploration game developed by a small company called System Era Softworks. It was released on December 16, 2016. It’s not very popular, and I bet you’ve never heard of this game before now, but it’s definitely is a fun and addicting game to play. It got 9/10 on Steam and 98% of people liked it, according to Google. Let’s jump right in.

System Era is a small development studio led by veteran game developers headquartered in Seattle, Washington. They were founded in 2014 by Brendan Wilson and Paul Pepera. Now they have a team of about 18 developers, designers, and engineers.

I enjoy ASTRONEER a lot. I’ve played about 50 hours of it and I intend to play much more. The graphics are really pretty and it’s not really difficult to run on your computer or laptop. You could spend hours on end playing this game. You start out by landing on the starting planet ‘Terran’. The tutorial it gives you is pretty clear and you should be able to get playing. It’s a survival game, so be aware of your oxygen level on your backpack. I would say the first thing to do is explore and find a cave. From there you can get going to gathering resources. If you’re stuck, they have a very informative wiki that explains every feature of the game in detail. That’s how I got through my first hours of playing.

Gameplay is great. The physics are smooth, graphics are pretty, and it’s super fun. There are some significant bugs though. For an early access game, bugs are definitely expected. My favorite bug I like to exploit is the ‘Seat glitch’. Basically, you pick up and get in a seat at the same time and it allows you to travel really fast.

One of my favorite features in the game is the multiple planets. In the game, you can construct a spaceship and travel to one of the six planets. Each of the planets has special features and you could spend hours or even days exploring each one. It’s not very stressful either because there are no monsters. The only dangers are some plants on select planets that have spikes on them. There’s one planet that has holes in the ground that would kill you if you jumped in, but it’s easy to avoid. All the hazards are easy to avoid in general.

I have to say, Astroneer has the BEST game soundtrack I’ve ever heard. I feel like it describes the game perfectly. An ambient, relaxing adventure. (My favorite is Gathering 3.) You can find the artists Bandcamp here. On Steam, you can buy Astroneer for $20 USD. It’s definitely worth the price if you ask me. You can also buy the soundtrack on Steam for $6 USD. Or, you could bundle the two for $25.

Astroneer made an appearance at E3, which is a big deal because lots of people watch/attend E3. If you don’t know what E3 is, E3 stands for, ‘The Electronic Entertainment Expo’, and it is an annual trade fair for the video game industry. It’s a good popularity boost for video game developers too. System Era were guests on the E3 Twitch live stream, where they showed their trailer for the game and talked about the future of Astroneer. They also were on Inside Xbox, which is Microsoft’s premiere streaming show.

The current state of the game right now is early access. They plan to do a full 1.0 release on January 6th, 2019. I’m particularly excited about their future plans. They plan to add things like weather, creative mode (I can’t wait for this), mod support, dedicated servers, more variations in terrain generation, AI creatures, and more. You can find all this on their roadmap.