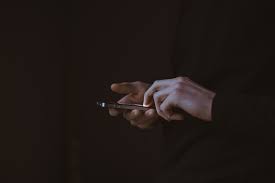 Delanie fumbled with the books in her arms desperately in search for her phone. Backpacks always seemed to go on forever. They twist and turn into darkness, swallowing day old granola bars and gum wrappers. Pulling her smartphone out of the abyss, a harsh blue light flickered as she held it up to her face. As her eyes adjusted, a clear green message appeared along the top of the screen. “9 pm. Hide.” Her eyes widened as she read the small grey text bubble. Thick black lettering at the top of her screen spelled out, “Unknown.” Assuming this was a chain mail she had been haphazardly shuffled into or an obnoxious subscription of some sort, Delanie deleted the conversation. She slipped her phone back into her tight jeans pocket and continued the walk up to her driveway. A thick layer of grey clouds suffocated the sky making the world seems quiet and dark. Glancing towards the ominous clouds, Delanie quickly stepped up her pace. The hairs on the back of her neck 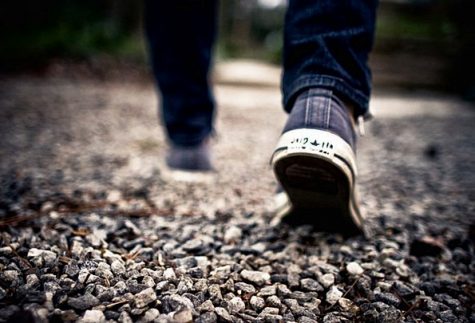 stood up as chills trickled down her spine. She slammed the tight door behind her as she slipped into the house.

“How was school, Lains?” routinely questioned her mother as she kicked her stained converse.

“Um, good I guess,” she plainly responded collapsing over her books on the kitchen table.

“Your father and I are going out tonight so you’re gonna have to make dinner for you and Liam, okay?”

“K,” Delanie hollered down the stairs as she trudged up into her room.

Reaching the top step, Delanie peeked into her brother’s room. Cracking open the door, a truck rolled over to hit her foot.

“Sorry!” giggled her brother from the other side of the rug.

Liam was a 6-year-old lego loving sweetheart. Being the youngest,he copied his older sister’s every move like a small shadow. Delanie was Liam’s best friend, and he hers.

“Hi Liam” Delanie cooed as she squatted to meet him.

“How does mac & cheese sound for dinner?’

Delanie nodded as a smile grew on her face.

Wandering into her room, she closed the door behind her and tossed herself onto her bed. The soft, warm bed eased her aching body as she sunk into the clean comforter.

“Maybe that’s why they call this a comforter,” she thought rubbing her sore eyes. Rolling to the side of her bed, Delanie reached onto her desk and scooped up her laptop. She forced it opened and frantically typed in her password. After scrolling through Spotify, 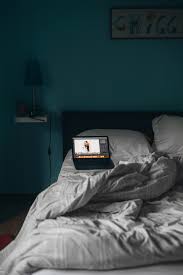 Delanie pressed shuffle, landing on “Saved.” Decompressing to the beautiful guitar and the raspy voice of Khalid was her favorite way to relax. Delanie loved Khalid. She had always wanted to go to one of his concerts, but her parents object time and time again. Delanie’s parents wanted the very best for her. They did everything they could to make sure her future was secure and nothing could get in her way.   As her heavy eyelids dropped, the relaxing notes of the piano lulled her into a quiet sleep.

“Delanie?” called her mother closing the door behind her.

Frantically ripping the earbuds out of her now sore ears, Delanie responded in her most awake voice.

“Dinner was delicious! Um, where’s your brother?” she asked picking up a toy car from the floor.

“Um, I think he’s watching tv,” she hesitantly responded walking past Liam’s dark room, the lights now out. Following her mother into the kitchen Delaney hesitantly unlocked her phone.

“Well what did you guys have for dinner?” questioned her Mother walking by an open box of Cheerios that had been left on the counter.

“I didn’t eat yet, Liam must’ve had cereal or something I don’t know,” Delanie responded looking at her phone. Her fingers were shaking as she scrolled through her endless screens of apps to find her messages.

“Delanie you need to watch over him better, Liam!” she yelled as she stormed down the hall into the living room.

As she fell upon the green block, a mysterious red bubble with a 1 slapped itself in the corner. Nervously, she tapped it as her dad rambled on about some funny story the waiter told them.

“You okay Lanie? You usually love hearing about the people we meet at these places.” her dad asked walked around her to peer over her shoulder.

“Oooo who is texting you? A boy.” he teased.

“No one dad c’ mon,” she snapped brushing him off her shoulder.

“Greg, have you seen Liam? He’s not by the tv or upstairs,” asked her mother

There it was. Unknown. Delanie opened the reappeared conversation and braced for the response. As her vision cleared, she read the message: