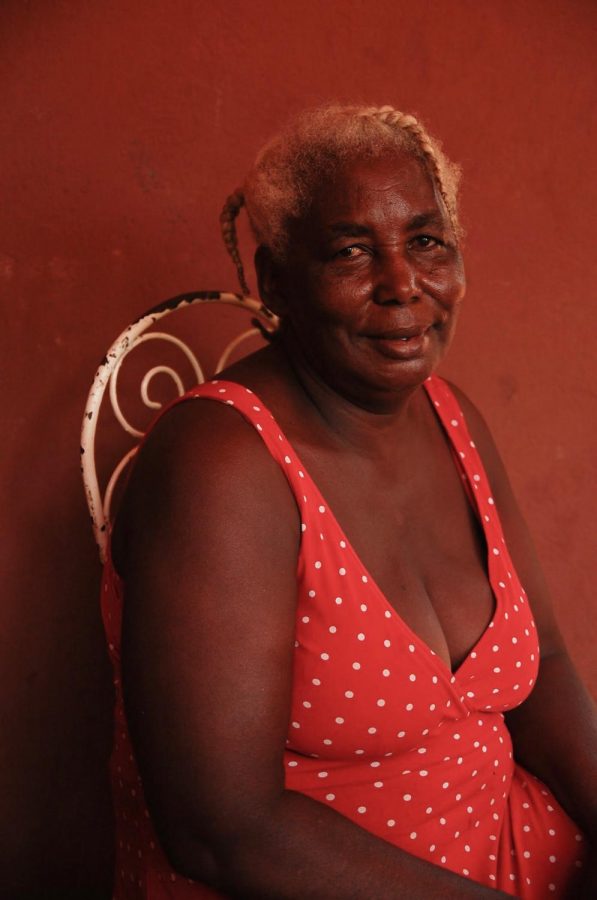 The first time I met Julianne was on the day I interviewed her. The first thing that captivated me was her aged smile and her red polka dot dress. She had such a calm and welcoming vibe that surrounded her. She lives on a farm in Bousiette where the earth is red and rocky. She raises goats for a living and as soon as we arrived on motorcycles, she brought out a wash basin full of clean water and a fresh bar of goat soap for us to wash our hands and feet.

Julianne is a mother to five kids, although she is the type of woman who is a mother to anyone who may need it. When her kids were younger she raised them all in the house we were sitting at during this interview. Her husband lived with her there and helped her raise all of their children. As he was being a father for his children, he also began to prepare a large amount of land that is now Julianne’s home. He uprooted a lot of the property in order to make it flat, he bought and raised goats so that they could grow the farm, and he slaughtered them when needed for food. He taught Julianne how to work but he also allowed her the amount of space she needed to be the very best mother she could be. Her husband died in 2002 but he did not leave her stranded. “I am happy to own all this land because it brings me money and it helps me live. It feels like a drawn out gift that keeps on giving in which my husband left for me”.

Melissa is the missionary we stayed with and she is married to Lender, which is Julianne’s first son. After knowing Lender for so many years it was very interesting to make connections with his personal life and his family. Lender grew up at the house I was sitting in and to hear Julianne speak about her kids, it made me feel like I was getting to Lender more. Lender remembers when his father passed away and he said he wanted so badly to help his mother but didn’t know how to. “My kids were too young to help me with things around the house. Little did they know that their smiles and snuggles at night were what got me through. I have such a deep love for my children. My first child was a miscarriage. There was something about that loss that prepared me for any other type of loss that would come my way in life and it prepared my heart to love as much as I do”.

Julianne mentioned that she wished she had had good schooling as a kid and so she tried to do everything she could to keep her kids in school when they were younger but after her husband passed away she did not have that money to spend anymore. She hopes that her kids will continue to learn so that they are able to do a lot of things and have good jobs to support themselves. “When my husband died, I learned how to make and sell charcoal for a living. I also needed to kill and butcher goats to sell at the market”. There was a time when she would pile all five kids on a donkey with her and she would stuff the saddle with everything she was planning on selling at the market and they would travel an hour to spend one day a week in Ti Palmiste. Julianne said that her favorite days were the ones where she could get her kids out of the house and doing something. She began to laugh and say “I have no clue to this day how we all fit on my donkey”.

When I asked Julianne if she ever was in a relationship with anyone else she smiled, looked down and said “No, I had and still have so much love in my heart for my husband. He prepared such a beautiful life for us when he was still alive and I believe he made sure that beautiful life would continue even after he was gone”.