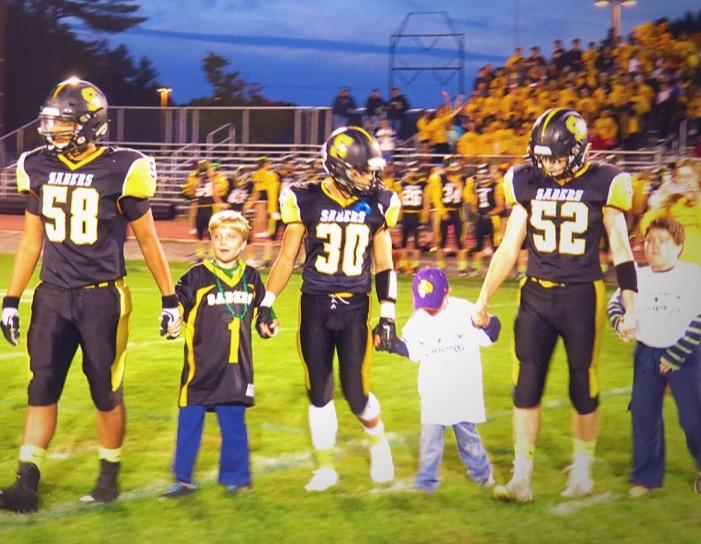 Gus Dreher is a playful ten year old boy with blond hair, blue eyes, a big smile, and hopes and dreams. He loves sports. He aspires to be an animal ecologist. He goes to school and spends time with his friends.  He takes ten to twelve pills a day. He can’t go upstairs.  He needs a wheelchair to go anywhere long distance, and he struggles with the terrible truth that if things don’t change, Duchenne Muscular Dystrophy will likely take his life sometime in his mid twenties.

Duchenne Muscular Dystrophy, also referred to as DMD, is a disease most commonly found in young boys that attacks the muscles.  It gets worse as the boys grow older.  They lose function in their legs and have to use a wheelchair.  They lose function of their hands and cannot feed themselves.  Slowly the disease begins to interfere with their heart and breathing. There is currently no cure for the disease but according to Steve Dreher, Gus’s father,  science is progressing, and there is more hope than ever for kids with this disease. “Gus was and is a beautiful and imaginative and funny kid,” says Steve, an English teacher at Souhegan High School in Amherst, NH. “I remember going into his room the night that he was diagnosed and sitting on his bed looking at him.  He was beautiful as he slept, and I couldn’t imagine that his body could be such a time bomb.”

The Dreher family learned of Gus’ disease in 2009, just one week after Gus’ mom Tonya finished treatment for breast cancer.  It was shocking as the family had to shift their worry from Tonya to their youngest son, Gus. They began the Hope for Gus Foundation with the mission of funding research and drug development to treat or cure Duchenne.  They quickly realized an important aspect of their work would be increasing awareness of the disease. Over the years Souhegan High School has played an important role in both the fundraising and education.

While other schools get hyped up for their homecoming football game, our school centers its fall enthusiasm around Hope For Gus weekend which consists of a Friday night football game as well as a 5k run and a festival that are held Saturday morning.  The Souhegan Ethics Forum spends months planning the fundraiser.  On Friday night Gus and his friends who also have DMD, get to feel as if they’re part of the football team as they spend time with the boys in the locker room,  run through the banner with the players, and hold hands with the football captains during the coin toss.  “We love the Gus Game because it’s a chance for us to play for such an important cause,” says senior captain, Nick Truchon,  “It’s an honor to play in the name of Gus and his friends.”

Part of what makes the event so special is that everything is centered around athleticism.  Between the football game, the 5k, and the fun run for kids, there is a focus on health an overall effort to get people moving.  It reminds people not to take physical ability for granted, because if things don’t change, boys like Gus will never be able to play football or go for a run or overcome everyday obstacles.  Jenn Schwager, a senior who helped care for the young boys during the football game recalls, “I was playing around with one of the little boys, David, and he kept asking me to hold him, run around, or spin.  At first, I didn’t make the connection about why he liked it so much until he kept asking me to run again and again.  He doesn’t get to run, so I did it for him.  To see the smile on his face making that happen for him, to me was one of the best moments of the night.”

It is not only a heartwarming event for everyone involved, but it gives Souhegan students a chance to do what they love for something bigger than ourselves.  “Walking out for the coin toss with Gus and his friends was such a special moment,” says Nick Truchon, “seeing them smiling and shaking hands with the refs and players really reminded me what an incredible group of boys we have the honor of playing for.”