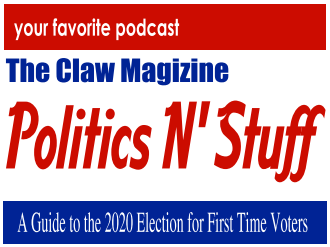 On the first episode of Politics N’ Stuff Amanda and Angie discussed the 2020 presidential candidates viewpoints and policy ideas regarding student debt. Amanda gave a run down on all the most prevalent information on the candidates involving student debt, Then they compared and contrasted the stand-points, as well as shared some of their own opinions. Click on the picture to listen or continue reading to get the laydown.

Joe Biden wants to help new teachers pay off their own student loans once employed. According to Forbes Biden hasn’t majorly addressed the issue of student loans thus far, he has only mentioned it in relations to teachers.

Elizabeth Warren has a plan to forgive student debt up to $50,000 per person, for 42 million people. This will eradicate student loans for 75% of Americans. She plans to pay for this by implementing a 2% tax on the 75,000 Americans with a net worth of 50 million or more and is calling this her Ultra-Millionaire Tax. In addition to this, Warren also wants to make all public colleges in the nation free for students.

Bernie Sanders has designed a policy he is calling the College for All Act, meaning that if elected this policy would cover all tuition and fees for those attending public four-year universities. He also plans to cancel all existing college debt and provide grants to students to help pay for essentials such as housing and school supplies. He believes that banks take advantage of student loan interest rates and wants to cap them at 1.88%. Bernie Sanders also believes states need to match dollar-for-dollar any money put into private universities, and triple funding for work-study programs across the nation. Sanders plans to pay for all of this by taxing 50 cents for every 100 dollars.

Kamala Harris says that if she is elected as the new commander and chief she will refinance high-interest loans to lower rates. Kamala Harris also promises to make community college free and public four-year college debt-free.

Pete Buttigieg, much like Kamala Harris, strides to make public college debt-free across the nation. Buttigieg promises to make college affordable for american families, that means free college for all low-income families, and free tuition at all public universities for middle-income families. He also plans to make pell grants more accessible for all students.

Andrew Yang hasn’t come out with any official policy ideas to combat college debt. When discussing the topic Yang said, “we need to reduce the student loan debt and control the cost of higher education.” He also wants to make community college free, or nearly free. Unfortunately, Andrew Yang doesn’t go on to discuss any further ideas or policy plans.

Cory Booker wants to create a path to debt-free college by investing in HBCUs (historically black colleges and universities). If elected Booker promises tuition free community college for all american families, as well as reform and simplify the federal financial aid system. Cory Booker strongly believes student loan services need to be held accountable for their predatory practices and plans to do so in office.

Beto O’Rourke agrees with Cory Booker, but O’Rourke wants to make community college not only tuition-free but completely free. In addition to this he plans to make 2 years of all public colleges free. Beto O’Rourke supports meeting full costs for low-income families and ensuring debt-free college for middle-income families. He wants to increase grant funding for essentials such as books, room and board, and accelerate student loan forgiveness.

Julian Castro believes in tuition free public college and community college, And like Cory Booker, Castro wants to reform student loan practices so the investment of college doesn’t need to be paid until a person is at least 250% above the poverty line. Julian Castro promises not to make American families pay more than 10% of their monthly income for higher education. With an interest rate cap, after 240 months the borrower will receive forgiveness for the remaining amount they owe.

We were not able to find any information regarding student debt for Mark Sanford,
Bill Wald, and Joe Welsh on any of their official campaign sites.

Donald Trump took the steps to implement the year-round distribution of Pell grants, verus limiting them to the Spring and Fall semesters, during his time in office. Under his control the Department of Education reformed the student loan servicing process to lower costs. The Free Application for Federal Aid is in the midst of being reformed to be more accessible to students and families. In addition to all this Trump brought in financial service experts to the department of Education to modernize the way FSA offers and services student loans.