The Power of Pink

On Wednesday, October 1, the Girl’s Soccer Team planned a “Play For Pink” soccer game for Breast Cancer Awareness. As many know, the month of October brings us more than just  “Spooky Season”; it’s a month dedicated to raising awareness for Breast Cancer. It may seem strange to dedicate an entire month to a single cancer but the statistics are staggering. One in 8 women are diagnosed with breast cancer, amounting to about 232,670 new cases per year. Breast cancer accounts for a total of 30% of all cancer diagnoses that affect women and  85% of women diagnosed have no family history. In the US alone, there are 2.8 million breast cancer survivors. Though these are startling facts, the lack of awareness is a serious concern. October is the perfect time to inform both men and women of their risk and the importance of early detection and a reliable, permanent cure. 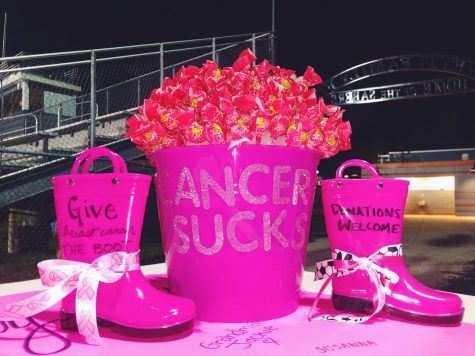 The Girl’s Soccer Team took the first chance they could get to “Touch anyone who is battling, celebrate those who have survived, and bring awareness to those who aren’t in the know” says Alexis Stevenson, the mother of a player. Many players made posters to commemorate the occasion while parents set up a donation table where they had “give cancer the boot” donation boots, “Cancer Sucks” lollipops as well as  bracelets, headbands, and hairbands sold for $1 each. They also laid out a “We Play For” poster where people were free to write down who they had fought or were fighting for. In all, they raised over $200 to donate to a local family. 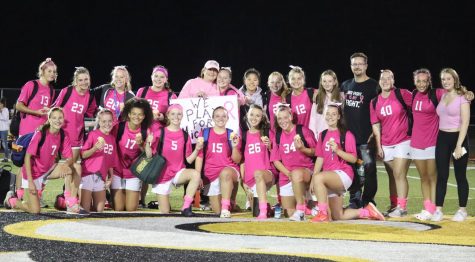 It seems that anyone who could go to the game did,  many adorned in pink to show their support. The game’s turnout was encouraging to anyone affected by  Breast Cancer and served as a reminder of the school’s strong sense of community. The Soccer Team’s compassion and care is appreciated by everyone in the Souhegan and Amherst/Mont Vernon Community. Check out this week’s Saber Spotlight for more information.