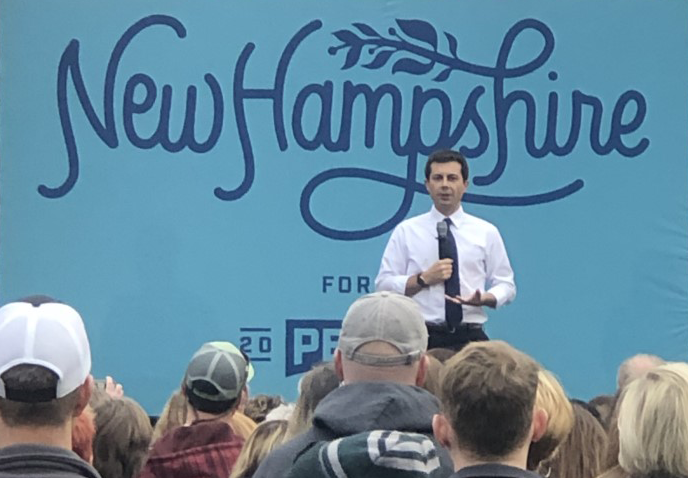 Pete Buttigieg, mayor of Southbend, Indiana and Democratic presidential candidate, visited the University of New Hampshire on Friday, October 25 for a town hall. Buttigieg answered questions submitted by the crowd and was joined by Massachusetts Representative, Maria Robinson.

Buttigieg touched upon many issues, especially gun reform claiming that people should not have access to assault rifles, for he knows what those weapons can do. He was trained in these weapons for his deployment in Afghanistan and strongly believes that civilians should not have full access to these high power weapons. If you would like to read more about his plans for gun reform, follow this link to view his notes on his plans.

He also said “I’m gay and I grew up in Indiana. I’ll be fine.” in response to what would happen if Trump starting calling him names and bullying him.

One attendee, Kyle Lange, a volunteer for the campaign, expressed his support for Buttigieg and Buttigieg’s mental health plan. (https://peteforamerica.com/policies/mental-health-and-addiction/)

“You should be able to use those devices to talk to a doctor, to get to the help you need, and to ultimately get help.”

Kathy Brunet, another Buttigieg volunteer, appreciates that Buttigieg displays appealing qualities for a president and not necessarily a particular plan of action.  “I’m more interested in a person who can be a leader, who can work with other people, and who can pull people together and be articulate and truthful than any specific plan.”

Massachusetts Representative, Maria Robinson, https://www.repmariarobinson.com/ , supports Buttigieg and his “extremely detailed and well thought out” plans. She expressed her admiration for his humility.

“Humility is such an important component for leadership,” says Robinson, “his willingness to say ‘I might not know one hundred percent about this, but I want to learn everything and bring in some of the smartest people and come up with plans.’ It means the world to me…He has the humility to understand that maybe people want to be able to make their own choices.” Robinson also stated that Buttigieg makes her blood pressure lower, a joke made by Buttigieg during the town hall.

“I feel calm and hopeful for the first time in three years. You feel as though he’s got this under control. You don’t have to worry. There’s something very homey and safe about that.”

Don’t worry if you weren’t able to make it, Buttigieg will come back to New Hampshire. You can visit his website, https://peteforamerica.com , to see when he is coming back.