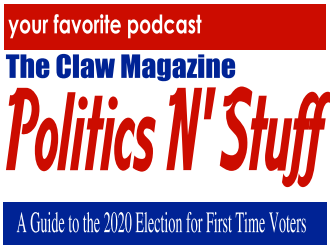 On this episode of Politics N’ Stuff Amanda and Angie discussed the 2020 presidential candidates perspectives and policy ideas regarding women’s health/reproductive rights. Angie gave a run down on the most attainable information on the first half of the candidates. Then Amanda gave a run down on the second half. They continued to share their opinions and perspectives as women along the way. This episode is a little more left leaning than usual as this is a topic Angie and Amanda are very passionate about, they would also like to note that some of the things they say or purely our opinion and should not be taken as fact (although you could). Click the link above or continue reading to get the lay-down on what happened.

Roe v. Wade: A landmark decision of the U.S. Supreme Court in which the Court ruled that the Constitution of the United States protects a pregnant woman’s liberty to choose to have an abortion without excessive government restriction.

Hyde Amendment: a legislative provision barring the use of federal funds to pay for abortion except to save the life of the woman, or if the pregnancy arises from incest or rape.

Joe Biden didn’t have any information regarding women’s right/ reproductive rights on his official campaign site. I was though, able to find an article on The Guardian highlighting his perspectives on the issue. Joe Biden said at a forum with Planned Parenthood that he had an, “100% voting record,” on reproductive rights. He also has been reported as having a more conservative stance on women’s health than other democratic candidates. But to an audience in Columbia Joe Biden said he would codify the right to an abortion, granted in Roe v. Wade into law if elected president.

Elizabeth Warren says she will make sure Congress passes new federal laws that protect access to reproductive care from right-wing ideologies. If elected she will create federal, statutory rights that parallel with the constitutional right in Roe v. Wade. Warren also says she will pass federal laws to preempt State efforts that functionally limit access to reproductive health care and lift restrictions on medication abortion. She wants to be able to guarantee reproductive health coverage as part of all healthcare coverage and as president will ensure equal access and reproductive justice.

Bernie Sanders says he will adopt Equal Pay for Equal Work through the Paycheck Fairness Act. And that as president he will fully fund Planned Parenthood, Title X, as well as other places that protect women’s health, access to contraception, and access to safe and legal abortions. Sanders plans to expand the WIC Program which specializes in special supplemental nutrition for mothers, infants, and children and promises to oppose all efforts to overturn  Roe v. Wade. If elected president Bernie Sanders will appoint judges who will uphold women’s rights and will immediately reauthorize the Violence Against Women Act once in office. He will pass the Equal Rights Amendment and will fight to end sexual harassment in the workplace, the military, and other institutions. Bernie also wants to protect women from harassment, discrimination, and violence in educational institutions by promoting and enforcing Title IX.

Kamala Harris, as attorney general in California, cleared the backlog of untested rape kits during her 1st year in office and as senator championed the rights of sexual assault survivors. Also as senator she led the movement against Brett Kavanaugh’s nomination for supreme court justice. As president she plans to protect Planned Parenthood from attempts to defund and promises to nominate judges who respect Roe v. Wade. She will rollback the dangerous and discriminatory rules against birth control and access to safe and legal abortions put in place by President Trump during is time in office. Harris will fight racial disparities in maternal health healthcare through her Maternal CARE Act and will mandate equal pay if elected president.

Kamala Harris says, “92% of all women killed with guns in high-income countries are killed in the U.S,” and that if congress fails to pass a comprehensive gun safety bill within her first 100 days in office, she will take executive action to close the boyfriend loophole. She also wants to require companies to obtain an Equal Pay Certification  to display on their website and will mandate that companies are fined 1% of their profits for every 1% wage gap they allow to persist. She wants to build a universal paid family and medical leave and overhaul anti-discrimination laws to secure justice for victims of discrimination. Harris also promises no abortion law will be able to take effect until the department of justice certifies it comports with Roe v.Wade.

Pete Buttigieg will pass comprehensive reproductive health care and repeal the Hyde Amendment so that those in need can access care equitably. Pete Buttigieg believes closing the gender pay gap requires not only that women are equally compensated but also that women are promoted into and retained in the well-paid jobs they deserve. As president he will require gender pay transparency for companies and pass the Equality Act. He wants to remove the deadline and support the Equal Rights Amendment, as well as, reverse the ban on transgender military service. Buttigieg will strengthen anti-discrimination and anti-harassment protections for pregnant workers and ensure that workers have access to predictable schedules. Pete Buttigieg released his, “Women’s Agenda for the 21st Century,” a plan to close the pay and wealth gaps, advance health and choice, secure power and influence, and build safe and inclusive communities, after the recording of this episode. You can access more information on his plan on his official campaign site peteforamerica.com.

Andrew Yang says, “access to birth control should be provided to all American,” and believes that, “access to safe and affordable abortion services should also be provided to all Americans.” Yang also believes that state requirements should be subject to oversight by a board of doctors before being put into action and has a goal of protecting the right to privacy to American women and to treat women equally. As president Andrew Yang will appoint judges who support a woman’s right to choose in every circumstance and will provide resources for planning and contraception.

Cory Booker promises to nominate judges who are committed to upholding reproductive rights if elected president. He will pass legislation to codify the protections guaranteed by Roe v. Wade and create a white house office of reproductive freedom. This office would be charged with coordinating and affirmatively advancing abortion rights and access to reproductive health care. Booker wants to guarantee access to employer provided contraceptive care and repeal the Hyde Amendment in his first budget as president. He will rescind the Trump Administration’s refusal rules that allow people to be denied necessary health care because of provider’s personal beliefs. And he will replace abstinence-only programs with evidence-based guidelines for the Teen Pregnancy Prevention Program. He wants to end the domestic gag rule which prohibits health care providers from discussing with low-income patients how and where to access safe and legal abortions, as well as, restore funding for the United Nations Population Fund.

Tulsi Gabbard believes, “we must continue to speak up today and each day, to guarantee equal pay for equal work, protect women’s right to choose, and help build a society with the spirit of aloha where people are treated equally as human beings.” Tulsi says she supports reproductive health care in the United States and that she wants to support states in their work to save and sustain the health of mothers during pregnancy, childhood, and postpartum periods. Gabbard promises she will protects a women’s right to determine whether and when to bear a child by limiting restictions on the provision of abortion services. As president she will implement a Paycheck Fairness Act to amend the Fair Labor Standards Act of 1938 to provide more effective remedies to victims of discrimination.

Julian Castro wants to advance maternal health, sex education, and contraceptive access as president. He also plans to repeal the Hyde Amendment and end the domestic gag rule which prohibits health care providers from discussing with low-income patients how and where to access safe and legal abortions.

Mark Sanford comes from a pro-choice/ antiabortion standpoint. He will support laws that give more rights to the fetus if elected president. In 2015 Sanford supported a bill that required women getting an abortion to see an ultrasound before having the operation preformed.

Bill Weld identifies himself as a pro-choice candidate which is currently the GOP majority. If elected he plans to establish pro-choice laws to prevent Roe v. Wade from being overturned.

Joe Walsh explains his position as pro-life with no exceptions. He says that, “with modern technology and science you can’t find one instance where the mother would actually die.”

Donald Trump is pro-life and has promoted and influenced many states to pass stricter abortion laws during his time in office.