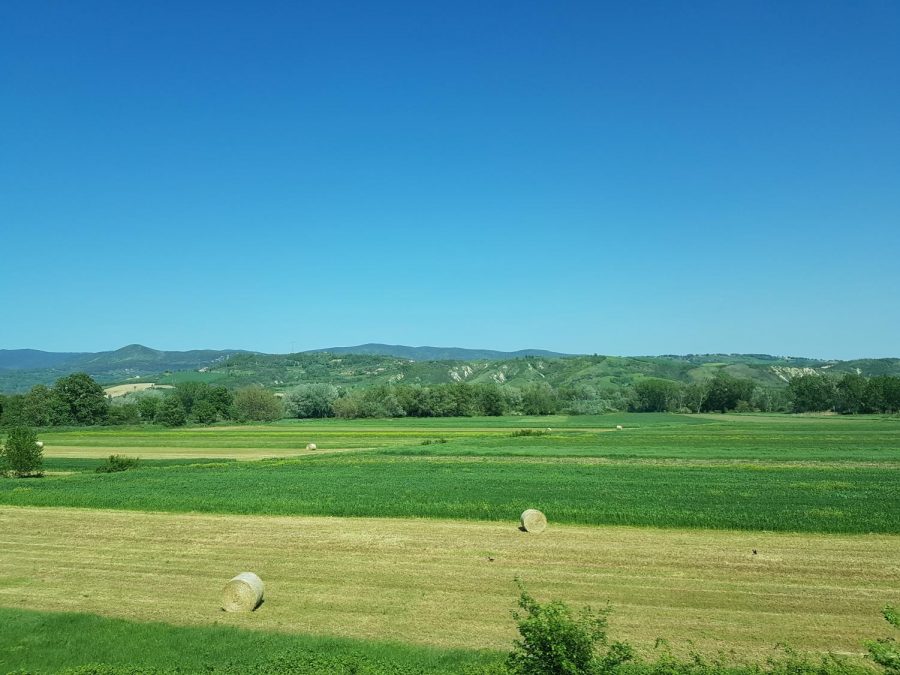 Kane had somehow managed to convince Ane to go with him on what was most likely going to be a suicide mission. It had been relatively easy, despite the terrible odds. If anything, Ane seemed a bit too eager to go. After telling Ane about their mission, they had packed supplies and headed out on horseback toward the warfront and the border between the two kingdoms. It was at least a couple days’ ride to the border, and that wasn’t including anything that would slow them down.

“How much longer until we get there?” Ane asked staring over Kane’s shoulder from her horse.

“We haven’t even been riding for two hours.”

Kane sighed. “It’s at least a couple days until we reach the border. The next village is at least a few hours away. We’ll stop there for the night, but we need to make it to the border as soon as we can.” They had set off not too long after noon, and wouldn’t be able to make it much farther before nightfall.

“So why don’t we take a magic carpet, or broom, or something,” Ane asked.

Kane sighed. Magic had existed on the continent for millennia, but only certain people were able to use it. The majority of magic users were in Raemith, and only a few could be found in Ocelin. “Neither of us can use magic, so even if we wanted to use some form of magical transportation, we couldn’t. Horses are the fastest we can get.”

Ane groaned in response, but didn’t complain. The rest of the ride was uneventful, stopping only a few times for breaks and food. They passed through the large, open meadows between the castle and the next village, until they eventually began seeing more fields and farmland.

When they finally reached the village, the sun was beginning to set. The road wound through the village, occasionally branching off into smaller paths just wide enough for a wagon. Houses, gardens and open lawns lined the road with plenty of space between them. At the center of the village was an open square, most likely used for open markets, lined with lit oil lamps. Surrounding it were a few businesses, a tavern, and some of the nicer residences. A path wrapped around the tavern to where the stable most likely was.

Kane and Ane went over to the tavern, and hopped off. A boy ran up and grabbed the reins of their horses. “Make sure they get fed and watered,” Kane said as he walked toward the tavern.

“Aye, sir. They’ll be back in stalls five and six, if you go looking,” the stable boy responded before leading the two horse down the path to the stables. Kane and Ane walked into the tavern, only half listening to what the stable boy had said.

The inside of the tavern was brightly lit with oil lamps on every table, although not all of them were lit. A bar stretched along one wall, the rest of the room filled with tables and chairs. The bar was manned by a short man, his hair just barely turning gray at the edges. The few occupants of the room were spread out, all wearing earthier tones and worn clothing. Among the duller colors, Kane stood out as he walked over to the bartender, his clothing bright and obviously rich. The bartender eyed him suspiciously as Kane approached.

“Two beds for the night, and two meals,” Kane said, tossing some gold onto the bar.

“Right,” the bartender responded, picking up the gold and reaching down to grab a key from a drawer. “Where you two from? Cause it obviously isn’t here.”

“None of your concern,” Kane responded coldly.

The bartender scoffed before handing the key over to Kane. “Room 13, up the stairs on the left.”

The stairs creaked as the walked up, and led to a dimly lit hallway. When they got to their room, the key scraped in the lock and took a bit of effort to open. The room itself wasn’t much better, cramped with only two lamps and a set of shutters over the window. The beds were small with scratchy mattresses and old, worn blankets. The only good thing was that it had plumbing, so no chamber pots were needed. Ane lit one of the lamps before flopping onto a bed.

“It isn’t the best, but it’ll do,” Ane said. Kane grumbled in response, glaring at the room. “Oh, get off your high horse. Not everyone can afford silk and feather beds.”

“I’d think that they’d be able to get something a bit nicer than this,” he grumbled before laying down on the other bed, shifting uncomfortably around the lumps. The room was silent for a few minutes, save for Kane constant moving around.

He nodded in agreement and they headed down to the tavern where the bartender served them a simple meal. Kane stared down at the bowl of stew in front of him, while Ane was already inhaling hers. A little ways away, a man stared at them as they ate their meal.

“You’re from the west, aren’t you? That’s where all the rich live,” the man said. Kane remained silent and continued poking at his stew with a spoon. “It’s obvious, the way you dress, how you pick at the food. You’re used to more expensive tastes.”

He paused and turned to face the man speaking to him. “What’s it to you?”

The man grinned wickedly and opened his mouth to speak when the bartender interrupted him. “Bane, don’t go causing any trouble. The fact that I even let you in my tavern is a miracle in itself. Don’t push your luck.”

Bane smiled in response and stood up, pulling on a long, black cloak. He walked over to the door and paused, turning around slightly. “You’d best hope your kind don’t forget us,” he said to Kane before leaving.