A review of Oi to the World by The Vandals 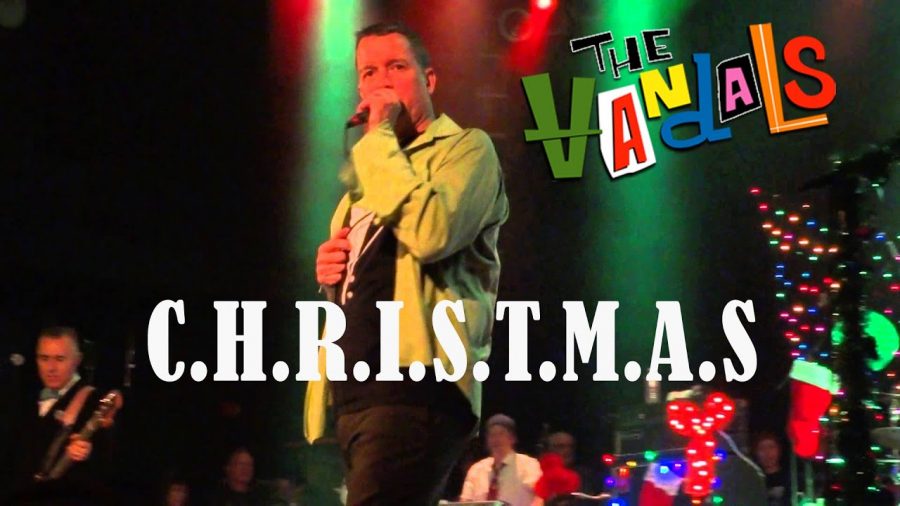 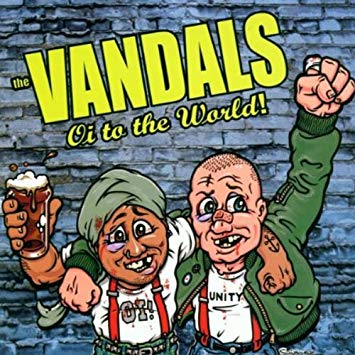 December is here, Christmas is just around the corner, and everyone is trying to get in the spirit. Ever get tired of the same Christmas tunes? If you’re anything like me, you’re definitely tired of hearing Mariah Carey’s ‘All I Want For Christmas Is You’ wherever you go. If you’re looking for some Christmas music that doesn’t make you feel like you’re at your grandma’s, or that you’re going down the escalator in Macy’s, give The Vandals a try.

‘Oi to the World’, released in 1996, the sixth album by The Vandals was, to the surprise of many, a Christmas themed album. Full of raunchy renditions of classic Christmas songs, it’s definitely not an album for a Christian Christmas. The Vandals trademark sarcastic humor really shines through in this album. First-time listeners may be taken aback by this, since it’s not inherently obvious that the lyrics are sarcastic, but once you know, you sure know. 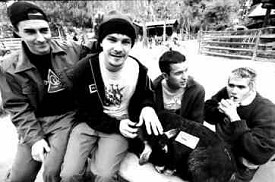 It’s definitely worth touching on the history of a band with such an illustrious history as The Vandals, who released their first album, ‘Peace thru Vandalism’ in 1982, and are still active today. The original members were Steven “Stevo” Jensen, who left the band in 1984 with Steven Pfauter, leaving Joe Escalante alone. Jensen sang and played guitar, and Pfauter played bass. Dave Quackenbush replaced Stevo as soon as he opted out and helped Escalante find a drummer (since Escalante switched over to bass from drums) and a guitarist.

Quackenbush and Escalante decided to see if they could pick up Warren Fitzgerald, a guitarist from the band ‘ Doggy Style’, as Escalante had played shows with him with the original Vandals crew. As for a drummer, they found Josh Freese in, of all places, Disneyland. Freese, at the time, was playing an electronic drum set in a children’s cover band, Polo. Where in Disneyland? The Tomorrowland Terrace Stage. The scene was certainly different for Freese, but he adjusted quickly. 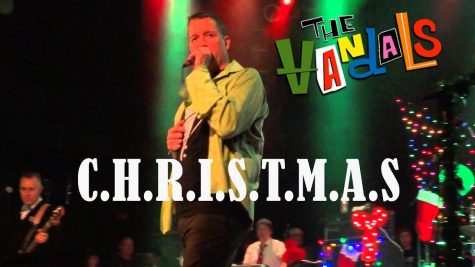 Above is a photograph of Dave Quackenbush performing ‘C.H.R.I.S.T.M.A.S’ with The Vandals

Throughout the history of The Vandals, eleven members have left the band and there have been eight live fill-ins. In all, that makes the total count of Vandals members (past and present) a whopping twenty-five. This includes Todd Barnes of T.S.O.L, Derek Grant of The Suicide Machines and Steve Jocz from Sum 41. To the surprise of many, Keanu Reeves at their New Year’s Eve show in 1993, filling in for Escalante on the bass.

The first track on the album, ‘A Gun for Christmas’, starts off nice and quaint, which is a trend that will soon establish itself throughout the album. After what seems like an eternity of church bells and a jolly “Merry Christmas!” from Saint Nick himself, the band rips in with a passion. A seriously stereotypical, ephemerally hard riff with a lifespan of about fifteen or twenty seconds. Promptly, church bells and chimes kick back in, and Quackenbush slides in, serenading us that this Christmas, he’s protecting his gifts. ‘A Gun for Christmas’ is harping on the consumerism of Christmas. The lengths people will go to protect their gifts, or the lengths they’ll go to while they protect them. Or, maybe it’s just goofy. You never really know with these guys.

The title track for the album, ‘Oi to the World’, is a sardonically heartwarming song about a neo-nazi skinhead bonding with a Muslim guy he was trying to kill because, after all, it is Christmas. Singalong choruses, Christmas bells on top of shredding guitar and some seriously fat bass. Definitely a suitable title track that both sets the tone for the album lyrically and sonically.

If I had one disclaimer for this album, it would be to give each song a chance. So many people listen to the first 15 or 20 seconds of a song, but leave some gold that shows up halfway through. This is especially true with such a sarcastic album. On more of the tracks than I’m comfortable with admitting, if you listen to solely the first half-minute of a song, you’re gonna just hear the “Hey! This is an album that makes fun of Christmas!” stuff. The stereotypical stuff. When I first listened to this album, that’s the gist I got. Then, when I went back through, I gave each song a chance to build up, and I was grateful for it.

Oi to the World

A Gun for Christmas