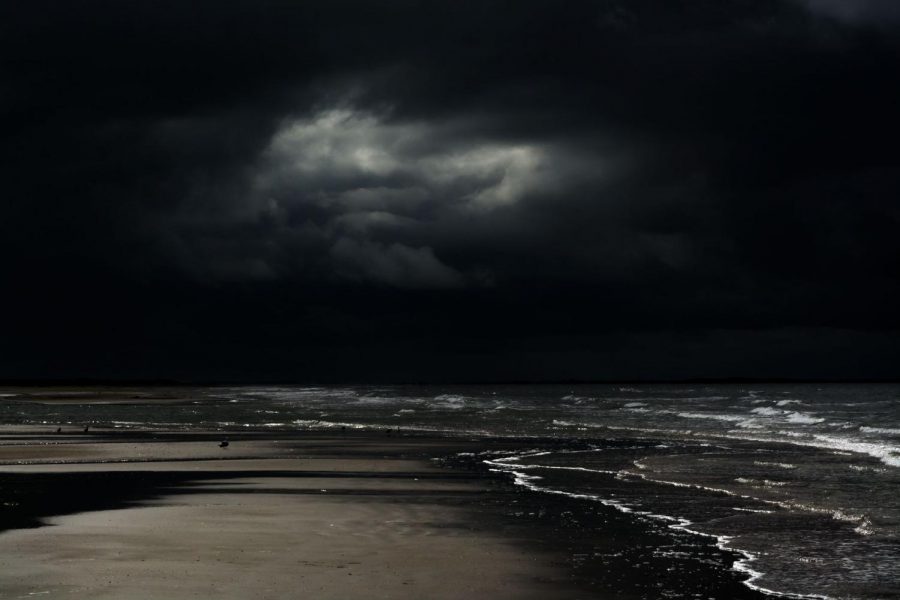 He was born by the sea.

Endless water crashing against the chalk cliffs and washing over rocky beach, two hundred feet below, loud and boundless and wild. So unconfined that it’s scary, stretching out until it touches the horizon in an expanse of waves that gleam with the rays of the afternoon sun.

He doesn’t like thinking about what lurks in those depths once his feet can no longer touch the bottom. The feeling of being weightless, suspended between water and air, is so viscerally wrong, as if even gravity had given up here and been replaced with something far more distant and primal.

Swimming is not about taming the waves; swimming is about learning to coexist with them, to let them play out their dance and crash against the rocky shoreline and make sure to stay clear of the wreckage, because the ocean is vast and uncaring and does not care if another body is smashed to pieces on the rocks.

Siobhan drags him outside for a smoke in the middle of the night sometimes, when it gets to be too much and she needs to get away. They sit on the edge of the cliff and stare out into the water. It looks endless. Endless and dark and deep. Probably full of unspeakable horrors. Things with sharp teeth and sharper claws and slimy, scaly skin, ready to drag him down into darkness until his wide eyes burn and his lungs bleed with salt.

She’s not scared of them. He doesn’t think she’s scared of anything.

A breeze rustles tall grass behind them, whipping through her hair, the red plastic collar of her ever-present raincoat. Waves crash against the shore. She tosses a smoking cigarette butt down into the water and it vanishes as soon as it leaves her hand, side-over-side through open air, until it hits the sea and is swept away, out to who-knows-where to end up as who-knows what.

They traipse back to the bed-and-breakfast in silence, pebbles crunching under her boots, crushing shells and sand into the weathered planks of the boardwalk.

Discarded flip flops and weathered, once-white trash cans line the strip. The two of them are the only companions to the shuttered shops and arcades that once drew bustling crowds. The hordes of suntanned tourists ready to spend hundreds on a perfect vacation are no more, leaving the weather to reclaim what always belonged to it and leaving the strip empty, abandoned, derelict. Peeling pastel shutters pulled closed over each window, signs missing letters, bright paint gone faded and chipped.

Siobhan kicks the edge of a jutting floorboard, sending a spray of sand up against the front of what was once a seaside cafe. She says the waves are comforting, that the beach is somehow more real without the colorful towels or umbrellas propped upright in the sand. Soothing, rhythmic, washing against the shore and lapping greedily at well-worn pebbles.

In the daytime, when the seagulls let out sharp calls that echo across the shoreline, there are no children to run across the sandbars or chase the ice cart down the length of the beach in search of a rocket pop. No families to picnic or splash in the water. No mothers in sunhats, shoulders and cheeks red with sun, hording their toddlers to the gazebo for lunch. No fathers in sandals and board shorts, handing out hot dogs and hamburgers, putting colorful plastic floaties on their children’s arms.

He thinks it’s lonely like this; Siobhan thinks it’s peaceful. She prefers the emptiness of the beach to the B&B, but even the beach is too restrained, the sands too hospitable for her. She prefers swimming in more dangerous places.

Sometimes she drags him down to the salt cliffs three miles down the coast and scales sharp, vertical rock faces in search of caves. Rock digs into her hands until they bleed; she digs her teeth into her bottom lip, so hard it leaves white-pink marks behind, and sinks short fingernails as far as they’ll go into the dried-out moss and hanging plants that provide little purchase on the stone.

There’s a cave down underneath the overhang, full of washed-up sea glass and discarded fishing line. The sea washes right up into it and leave behind little trinkets. Seaweed, shells, crabs, driftwood. Little trinkets lost to the sea and returned to the shore; a tiny porcelain doll, a locket, a lost pocketwatch. A water-logged book with a metal clasp. If he stays too long, the water will lap him up too, as soon as high tide returns to claim him.

A handheld radio can pick up a signal there. Most of the caves are that way. It’s no recognizable station, no signal to pick up on, but it will still register as sound.

Endless, crashing static, in and out like the tides. Like the garbled mother tongue of things lurking deep beneath the surface. Filling the emptiness, echoing off walls of salt and stone, announcing in waves of violent, ear-hurting scratchiness. Water-choked screams drowned out by a simple mechanical error.

The static proclaims all things will be reclaimed; all things will be wrapped in liquid embrace, in the sensation of seaweed wrapping around a bony ankle like fingers, the heart-rending panic that comes with the realization that the surface is a lot farther away than first thought. Straining. Aching. Screaming out for air but finding only the salt burn of seawater. Filling the lungs, drawing the blood of desperation, befriending the sharp red tang of metal.

All things will come back to the sea. All things will learn what it is to drown, becoming nothing more than a body tossed about by the far-away push and pull of the moon, up against the jagged stones as they bludgeon out the last vestiges of life.

The tides are violent today, slamming up against the shore. Gray clouds cast dim light down onto the sea. In the gleam of far-away crests and peaks, he could almost swear he sees the movement of something massive, something scaled and thrashing — or maybe it’s just his imagination. Maybe that observation holds as much water as historic explorers and sailors claiming to encounter mermaids.

The seawater laps steadily up to his knees, soaking his jeans and washing sand into his shoes as he turns the gray plastic dial on the radio and finds another station of static. Harsh, cold wind whips at the fabric of his t-shirt. The sky has darkened. There might be thunder in the distance, but if there is, it’s drowned out by the ceaseless crashing of waves on the rocks.

It gives him a second’s silence in which to think. He wonders where Siobhan went. Inland, probably, to wait for him at the bench at the top of the cliffs. The radio is almost inaudible, a crinkling and crackling crash of gray. It broadcasts indecipherable almost-speech with even more fervor as the sound winds down to deadness.

It was inevitable that it went silent, just as it was inevitable that he saw the gleam of shiny red out by the edge of the basin, where the water pours into Bluefin Bay through an obstacle course of rocky outcroppings. A raincoat. Inevitable that he steps forward to get a closer look, through the silt that now clouds the thigh-deep water, gray with dust and stirred-up sand and the greenish light spilling into the cavern’s mouth.

Something wet and solid wraps itself around one ankle. He does not look down.