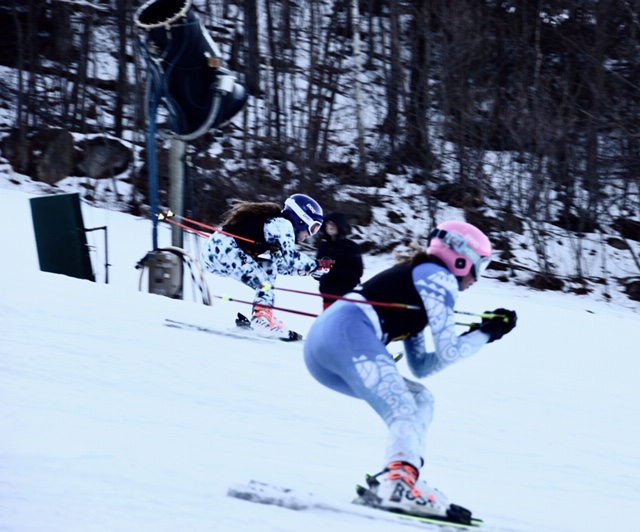 January has been a busy month for the Souhegan Alpine Skie team! The depth of talent has produced strong and consistent team results for both boys and girls. Their athletic skills and positive attitude have created a fun atmosphere and growth for all participants.


The girls’ team placed first in a giant slalom (GS) race on January 23rd. They have placed 2nd behind Con-Val in both slalom (SL) races on January 9th and 16th. Scoring girls have been
Bella Kraus, Erin Taylor, Riley Greene, Sierra Kimball and Abbie Robinson. Senior Captains Georgia and India Jones have also had an outstanding season.

The boys’ team also placed first in the GS race on January 23rd. They placed second behind Hollis-Brookline in SL on January 16th. On January 9th, they placed 3rd behind Bow and
Hanover in SL. The scoring boys have been Andrew Taylor, Quade Bell, Nathan Fritz, Aidan Leary, and Alec Reitter. Congratulations to senior captains Andrew and Quade who have put a Souhegan Alpine Boy on top of the podium for our first five races!
Several more races remain before Div 2 states in mid-February. Wishing all the alpine racers continued success!
This season, SHS Alpine coaches and captains decided to host a fundraising raffle, instead of a movie night. This fundraiser was a great success thanks to the support of many donors and
those who purchased tickets.