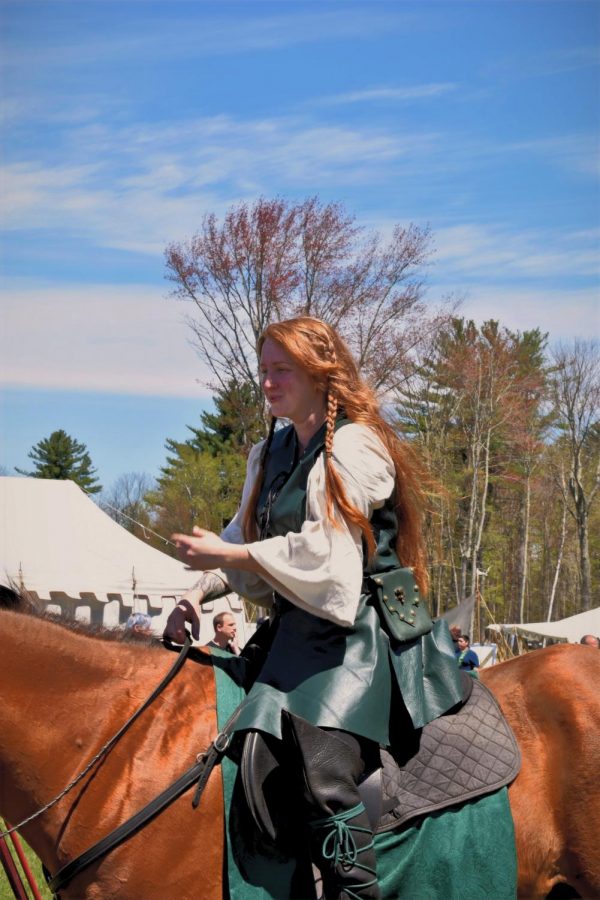 After two days, they arrived in a town on the outskirts of Ocelin. The warfront was only a few miles away, and the military had already taken up residence in the town. “We should find the general here and find a way to get through the warfront,” Kane said.

“And some food,” Ane noted. Kane nodded in agreement. The ride had been longer than the others as the nearest towns were a ways away from each other. In a field on the other side of the town, they found the military encampment. Tents covered the field in orderly rows with the occasional fire pit set up. Near the center was the largest tent with faded red fabric hanging on the sides. “That’s probably where we’ll find the general,” Ane said, pointing at the red tent.

They rode toward the encampment and were stopped almost immediately by soldiers. “Halt!” One cried, “What business do you have here?”

“We have come to see the general,” Kane replied in what he hoped was a commanding tone.

The two soldiers glanced at each other nervously. “Er… the general is busy at the moment. You’ll have to come back later,” the other soldier responded.

“This matter is of the utmost importance,” Kane said frowning, oblivious that anything weird was going on. Ane glanced between the two soldiers suspiciously.

“The general is away, but should be back later. If you want, you can leave your horses here and get some food while you wait,” the first soldier suggested slowly, glancing between the other soldier and Kane.

Kane contemplated it for a moment before responding. “Alright, I am hungry from the ride.” Kane dismounted quickly, turning to look at Ane. “Come on Ane.”

“Right,” Ane said slowly, still suspicious of the two soldiers, then dismounted from her horse as well.

The two soldiers grabbed the reins of their horses. “We’ll take care of your horses until you return,” the second said before leading the horses away.

Kane nodded before turning and walking back toward the town. Ane hurried to follow him. “I think we passed a tavern along the way here.”

“You didn’t find them at suspicious?” she asked.

“No, why would I?” he responded, glancing at the buildings on both sides of the street.

“They got nervous when you asked about the general.”

Kane laughed. “So? That just means that they are scared of their general. It’s normal.”

Ane frowned. She knew that Kane was oblivious, but he couldn’t be this oblivious. “But-”

“Ane, generals are supposed to inspire fear. Those two soldiers probably just got on his bad side,” he interrupted. “Ah, here’s the tavern.”

Kane hurried into the tavern, evidently hungry. Ane frowned, wanting to argue further with him, but thought better of it. Shaking her head, she followed him inside. The tavern was brightly lit with tables scattered around and a fire burning in the hearth. Kane had found a table in the corner farthest from the fire, and she hurried over to join him. Most of the tables in the tavern had at least two people seated at them and bits of their conversations floated over to them.

Ane opened her mouth to talk to Kane, but he quickly shushed her and nodded toward the table near them. Two men sat there talking. “Have you heard the rumors?” The one on the right asked.

“About the battle a few hundred years ago? Of course I have,” the other responded.

The first leaned in conspiratorially and whispered back. “I heard that Ocelin fell that day, that it was conquered by another empire.”

The second scoffed and shook his head. “I don’t believe it. Everyone knows that it was Raemith that attacked, and failed to kill the prince.”

“As if, the rumors are from the villages we’ve conquered.”

“Exactly, they’re trying to unsettle us and cause chaos in the ranks.”

Ane looked back at Kane as the argument continued. His fists were clenched tightly so that his knuckles turned white. “Kane, this isn’t the place to start a fight,” she whispered. Kane scowled, but turned back toward Ane, muttering something under his breath.

“After we eat, we’ll head back to the camp and try to find the general again,” Kane said, pretending nothing had happened.

After finishing their food, they went back to the camp where the same two guards were stationed. The guards looked slightly startled at the sight of them. “Has the general returned?” Kane called as he approached.

“Er, yes. I can take you to him now,” one of the guards responded, quickly turning around and heading toward the center of the encampment, checking to make sure that Kane and Ane were following. “The, ah, general returned a few minutes ago and is expecting you.”

They soon arrived at the red tent and ducked inside. In the center of the tent stood the general in full uniform. “I’d welcome you, but I am afraid that I don’t know your names.”

“My name is Kane Jaccere, third prince of Ocelin, and this is Anemora Praelia. We seek passage across the battlefield.”

The general gave a bow before replying. “It is my pleasure to assist you, your highness. I am General Ager. How might we assist you on your venture?”

“Ager?” Ane muttered, frowning at the mention of the name.

Kane, ignoring her input, smiled. “Some reinforcements and any magical means to assist our travel would be greatly appreciated.”