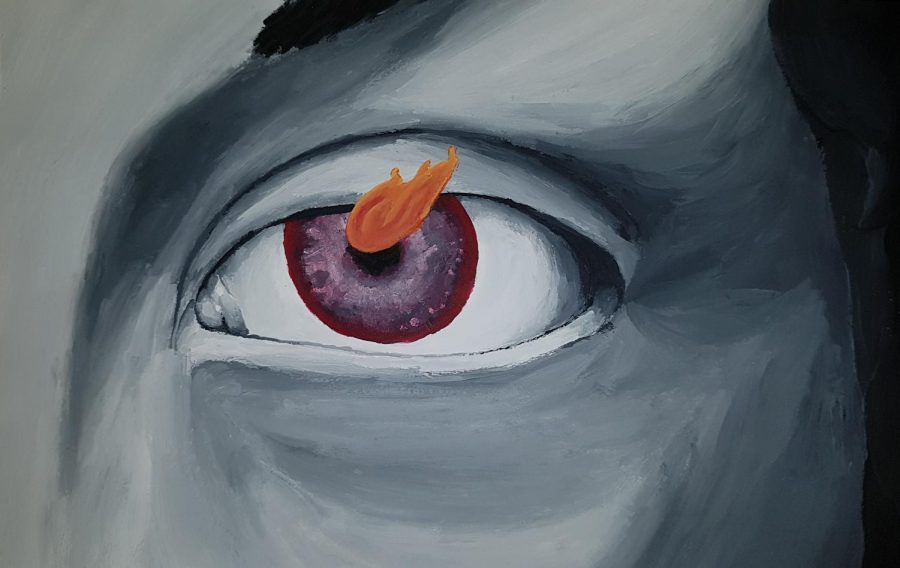 A shadowed figure marched through the halls of Raemith castle, black cloak billowing behind him, as he headed toward the throne room. The torches flickered as he passed, the shadows seeming to grow. The guards pointed their swords towards the figure as one shouted for him to stop. “I don’t have time for you,” he growled as shadows rose from the walls, surrounding the guards.

“What the! Hey, get back here,” one of the guards called, swinging his arms around in an attempt to find the intruder. The figure ignored them, instead walking up to the doors and blasting them open.

Inside, the two kings stood ready and lightning flashed outside the window. Xander’s eyes glowing red while Lucas held a sword pointed toward the doors.

“Bane?” Lucas interrupted Xander, who looked slightly hurt from being interrupted, and lowered his sword. “What are you doing here?”

“They’ve gone too far. The child they’ve sent shows signs of the same evil found in his ancestors,” Bane seethed, the black shadows he had used to blast open the door slipping away.

“You must know that evil well. You were on there, helping them kill the queen,” Xander replied, standing in front of Lucas protectively, still frowning at Bane.

The guards burst in, their swords at the ready, and ran forward to apprehend Bane. “Your majesties, this intruder got past us. Are you alright?”

Lucas waved them off. “We’re fine, he means no harm. You may go back to your posts.”

The guards nodded, still frowning. They bowed, before turning to head back to their posts outside and closing the doors behind them. Bane shrugged his cloak back into place and scowled at the retreating guards before turning back to the kings. “He’s using a captured sorcerer, one from your own kingdom, to get them across the battlefield.”

“Venefici,” Bane responded. “And that’s not all. The child they’re sending isn’t just anyone. He’s the third prince, and he’s planning to kill you.”

“If he can even get here and past all the guards,” Xander said.

“With Venefici? You think your guards stand a chance against him. He is one of your best sorcerers and they have him under their control.”

“Both of you, calm down. There’s no point in arguing. Bane, can you keep an eye on them? Stop them if they get too far,” Lucas interrupted, stepping forward to standing between them to stop them from fighting each other.

Bane kept scowling, but nodded and began to leave. “I expect to be paid.”

“Your kind always do,” Xander said as Bane left. The guards glanced slightly at Bane as he walked by, the torches flickering briefly in his wake. After the door banged shut, Xander huffed. “I don’t like him.”

Lucas sighed and sat down at the table, setting his sword on top of it. “I’ve noticed. But that doesn’t mean we don’t need him. He’s powerful and he can help us win the war. Insulting him will only make him want to help us less.”

“We can’t trust his kind. All they care about is gold, and they’ll betray anyone for it,” Xander argued. From what they had heard, Bane had been paid by the Argon empire to kill Ocelin’s royal family. After the invasion, they had heard very little from them, only rumors from refugees fleeing to Raemith, so nothing was truly certain.