Amy Klobuchar Rises in the Polls

On February 11th, 2020, the first-in-the-nation primary election took place across the state of New Hampshire. It was predicted by many that the top candidates of the primary would be Buttigieg and Sanders. A poll from the University of New Hampshire on February 8th showed that the winning candidates would be Sanders, Buttigieg, Biden and Warren. These predictions were pretty logical at the time, as all of the candidates above have polled relatively high throughout their time running. Although the top two candidates of the New Hampshire primary did end up being Sanders and Buttigieg, the third candidate wasn’t Warren or Biden like predicted, it was Amy Klobuchar. 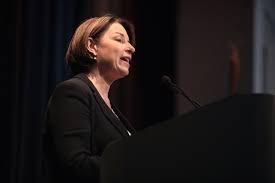 As the results of the first-in-the-nation primary came in on the evening of February 11th, it was clear that Senator Amy Klobuchar was now a clear option for the Democratic Nominee. She got 58,796 votes overall, with 19.8% of the vote, making her third in the New Hampshire Primary.

So, what does this mean for the future of Amy Klobuchar’s campaign? Looking to the South Carolina polls, they share that Klobuchar is currently polling at 8%, which is exactly how high she was polling in New Hampshire. Although there is a higher number of Republicans in South Carolina, the similar poll numbers could predict a similar outcome as the New Hampshire primary in South Carolina.

On Wednesday, February 19th, Amy Klobuchar attended a debate with five other Democratic candidates. In the past debates, she hasn’t had a particularly strong presence. One of her most notorious moments in the past debates was her developing rivalry with Mayor Pete Buttigieg. Wednesday night’s debate only furthered their conflicts. Buttigieg called out Klobuchar after she forgot the name of Mexico’s president. With the help of Warren, Klobuchar held her ground, saying that her error was just “momentary forgetfulness”.

What will the future hold for presidential candidate Amy Klobuchar? After placing third in the New Hampshire primary, she’s more of an option for the Democratic Party’s nomination than ever before.