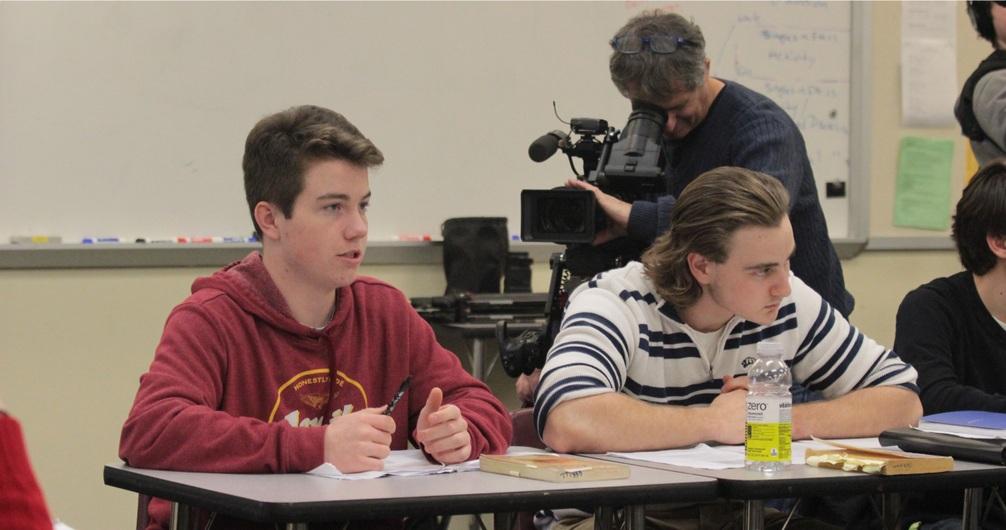 Souhegan Ethics in Focus: The Documentary, HYPE, and the Students Who Make It Happen

“This Class has a big year ahead of them” Senior Alex Craven said Friday at the Souhegan Ethics Programs most recent Seminar.

Students in last week’s seminar tackled philosophical theories pioneered by Descartes, Aristotle, and many others ,to answer the question ‘Why is it dangerous to let perception define truth?’. ‘It’s interesting because these are issues that people have wondered about all through history, and we get to talk about them just like these thinkers did” another senior, Matthew Saunders commented.

Last week, they encountered a new dynamic in the conversation: a professional camera crew in the room.

In August the Ethics Forum, the non-profit extracurricular wing of the Souhegan Ethics program, entered a new partnership. With the help of New Hampshire Humanities, Students drafted (and received), a $30,000 grant from the National Pulitzer foundation. In addition to this, the Pulitzer foundation commissioned the Portsmouth based film company, Atlantic Media Productions, to craft a documentary piece on the Ethics program from start to finish; in the classroom and beyond.

The Ethics Forum hosts a variety of community based events throughout the year, including Run for Gus, a 5k in Amherst that raised around $16,000 for the Hope for Gus Foundation, Operation Pumpkin, a yearly activity at Mont Vernon Village School where seniors take a day to help with classrooms and perform a dance in assembly, and a variety of others. Their efforts culminate with Hosting Young Philosophy Enthusiasts (HYPE), and event hosted at the University of New Hampshire at Durham, last year collection over 750 students from multiple states. “It’s a really cool opportunity, being able to gather so many kids from all over with a common goal – talking about issues that matter” forum member Ely Marciano remarked.

Friday also saw the Ethics Forum hosting a group of students from Spaulding High School to collaborate on planning the day of HYPE. The two schools worked together throughout the day to develop materials to fuel discussions at HYPE on the day’s topic, freedom of speech.

Ethics forum member Alexandra Cullen spoke on the collaboration friday, remarking that the group expects over 1000 students this year in Durham, almost 300 more than the year previous. “This year we’re looking at our biggest growth ever, and laying that foundation for even bigger things to come” she said.

HYPE 2016 will be held at the University of New Hampshire Durham on March 17th, 2016, and Atlantic Media Productions documentary will premier fall of next year.