The Previously Untold Story of The Iliad’s Women

“A war does not ignore half the people whose lives it touches. So why do we?”

The Iliad is one of the most prominent works of literature in history, endlessly read and dissected by academics throughout time. Though, considering the age of the piece, reading The Iliad can be an arduous commitment, due to its difficult language and structure. Another issue of the book, also due to the era it was written, is the inherent misogyny of the piece. Ancient societies were known for their discrimination of women, and this is reflected heavily in The Iliad. Female characters in the epic are so few and far between, and nearly all of them have little to no dialogue, are villainized, and exist to serve men, who are also incredibly sexist. These issues in The Iliad find themselves mended or examined in A Thousand Ships; a new adaptation of the notable epic told through the point of view of the women of The Iliad.

A Thousand Ships is a modern retelling of the Iliad led solely by the perspectives of the women and goddesses of the Trojan War. The story begins with the end of the war, as Creusa discovers her city of Troy captured and aflame by the hand of the Greeks. From there, the reader is taken on a journey that weaves through the timeline of the Trojan war, guided by the muse Calliope as she receives prayers from Homer, the author of the Iliad. In this novel, the Iliad’s background characters become the driving forces of the story, and their voices and experiences are rightfully heard. Natalie Haynes masterfully spins the soul of the Iliad, bringing forth its hidden tales and proving that Homer’s untold stories do not lack importance, but instead hold it with a glory unknown to many of his favored heroes.

This novel was unique in many aspects, and held many wonderful attributes. First, in the chapters with the narration of the muse Calliope, the fourth wall is somewhat broken as she received Homer’s pleas for inspiration while he writes the Iliad, and as she complains about his whiny manner to the reader. Her character’s voice, along with every other perspective in the story, was very strong and multi-dimensional, which was an impressive feat considering how many characters there were, and how little information Haynes had to work with. The complex development of the characters was partially due to the different formatting of each of their chapters. For example, all of Penelope’s chapters were written as letters to her husband Odysseus, spanning from his battles in the Trojan war to his famous journey home, which was an element of the novel that added depth, and connected the reader to the character in a creative and uncommon way. One issue with the novel was it’s timeline. Haynes jumped back and forth with limited explanation, which could provide some confusion for readers who lack an understanding of the characters and events of the Iliad. Additionally, a chapter of Helen’s perspective was missing from the novel, which was surprising, considering that she is the namesake of the book; the face that launched a thousand ships. Helen is notably and wrongly disliked by many, and because the purpose of this novel is to erase the false image around many of the women of the Iliad, Helen’s point-of-view was almost expected. Though, any faults of this novel are entirely overshadowed by its plentiful strengths. This is truly an engaging and beautifully written read.

Though, why was there a need for this novel to be written in the first place? Why does history uphold its pattern of abusing, mistreating, and purposefully misunderstanding women, in both the real and mythical world? The answer is complex and lengthy, but much of it connects to their depiction in religion. Ancient Greek society believed women were the root of all evil due to their portrayal in religion, specifically in the myth of Pandora’s box. According to Greek mythology, Pandora was the first mortal woman; created by Hephaestus and gifted various attributes and items by many of the Ancient Greek deities. Zeus gave her the trait of burning curiosity, and a box which he designed as a vessel to deliver the all forces of evil to earth, because he was upset with mankind after they received fire from the titan Prometheus. Pandora was crafted to be a scapegoat for the cause of all evil in the world, despite the gods being at fault. Those of Ancient Greece followed their religion with intense devotion, and this myth had a significant impact regarding treatment of women in Ancient Greece, who faced extreme discrimination. While this myth may offer some insight into why such prejudice existed, it does not excuse it. It simply explains it.

Much of A Thousand Ships is centered around the question of what heroism is. In the afterword of this novel, Haynes states that a friend of hers inquired about the book’s premise, stating that the men fought while the women didn’t, and therefore were not the heroes of the story. She combats this by saying “…heroism is something that can reside in all of us, particularly if circumstances push it to the fore. It doesn’t belong to men, any more than the tragic consequences of war belong to women. Survivors, victims, perpetrators: these roles are not separate. People can be wounded or wounding at the same time, or at different times in the same life.”. But, what does it even mean to be a hero? The concept of a hero was one played with significantly in Ancient Greek society and mythology. It was the quota an individual must meet to avoid the lower tiers of the afterlife, and reach eternal bliss. To the Greeks, being a hero did not mean an individual held principles and morals that guided them through a life of generosity and integrity. If that was true, many of Greek mythology’s most notable “heroes” would be regarded as monsters, considering almost all of them held a history of mass-murder, assaulting women, and infidelity. It would be difficult for such morally compromised deities to decide between good or bad, but it is not difficult to distinguish an action as remarkable.

A Thousand Ships examined some of the most complex and discussed themes of the Iliad and Ancient Greek society, channeling them into a stunning piece of literature that rivals the Iliad itself. It gives voice to those unfairly silenced, misunderstood, and villainized, and in doing so not simply defines what it means to be a hero, but what it should mean instead. 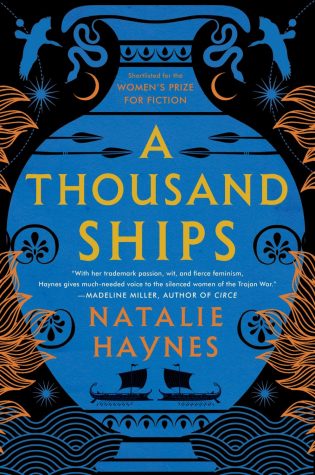