The Implications of Sexism in Sports 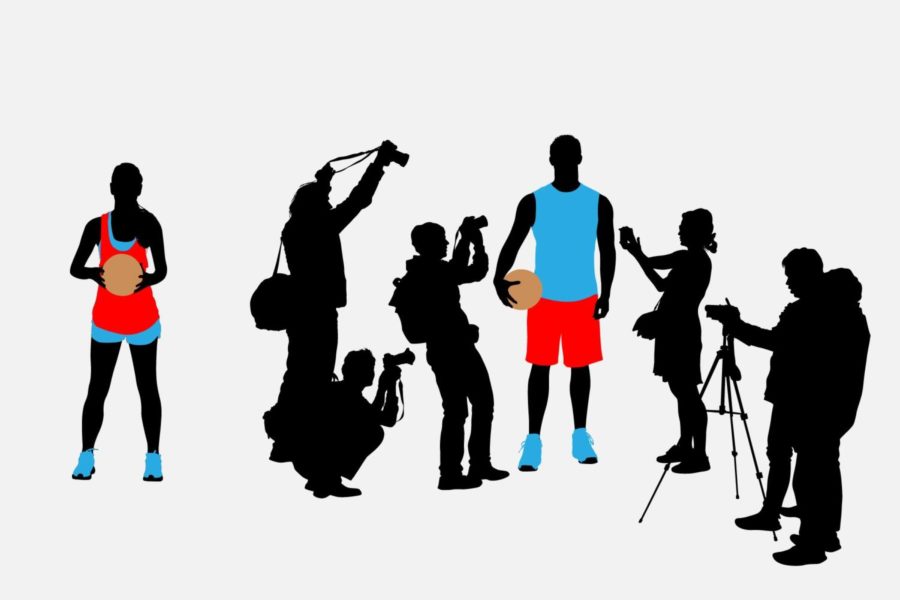 At the prime time Friday night basketball game, hype songs blare from the gymnasium speakers, opposing coaches greet each other in preparation, and players excitedly take the court, ready to play. But, the strange thing is, the bleachers at this game are virtually empty besides a spattering of parents and maybe a front row full in the student section.

Sadly, this scene isn’t really that strange for the Souhegan women’s basketball team. It actually isn’t even unexpected. As Souhegan men’s basketball games fill with bustling crowds and a cramped student section, the women’s team is shocked to see a half full gym, even when playing their rival teams.

Women’s sports teams have fought in the shadows of men since the birth of organized sports.

In Susan Shaw’s article on the misogyny of sports in the U.S, she makes the interesting point that during the Second Industrial Revolution, from the mid 1800s to the early 1900s, many men left farming for factory work, and sons were left at home with their mothers. Because of this, patriarchal society feared that spending so much time with their mothers might make the boys weak and effeminate, so they answered this issue with organized team sports to teach the boys the “masculine values” of strength, hard work, and discipline.

Sports therefore grew with men in mind, and from their inception, organized sports were created for men, and made to benefit them. And female athletes have been forced to deal with the consequences of this.

In other words, in the world of sports, women are always an afterthought because men have enjoyed a decade-long head start and reaped the benefits.

Some of these benefits that male athletes experience include higher production values, higher-quality coverage, higher-quality commentary during broadcasting. Additionally, millions of dollars are given to promoting, sponsoring, and marketing athletes, as well as years of research on effective training and good nutrition for men’s bodies.

More specifically, Janet Fink, an expert in the marketing of female athletes and women’s sport spoke to CNN about an obvious problem in the commentary of Women’s sporting events.

Janet says she doesn’t understand how one could call someone who is a world-renowned athlete a “girl,” but that it is very common in sports reporting. Janet also remarked, “I mean, if you just flipped it, and you thought about a commentator talking about a male athlete as a boy…it’s comical.”

The frequency of this language is supported by a study which drew from a word database of written and spoken English from a wide range of media sources, which found that male athletes are typically associated with the words “fastest,” “strong,” “beat,” “win,” and “dominate,” while female athletes are associated with words like “aged,” “pregnant,” and “married.”

This language undoubtedly has an impact on how people view female athletes, and most likely impacts how they view themselves as well.

Additionally, Washington Mystics player Elena Delle Donne says she has felt the impacts of the head start of men throughout her time in the WNBA. In regards to herself and other WNBA players, Elena said, “We absolutely do not get promoted as our male counterparts do. Yes, I’m talking about the NBA. When you put millions of dollars into marketing athletes and allowing fans to get to know a player, they develop a connection with someone and are more engaged and continue to want to see/learn more. How is anyone going to get to know me or any of my colleagues if we aren’t marketed as much?”

The lack of exposure that women have to build from to capitalize on their talent makes it nearly impossible for them to reach the same success level as male athletes.

But, the benefits of being a male athlete don’t stay in the world of sports and the promotion/broadcasting of athletes, but are also felt in the physiological side of athletics. For example, in a TedTalk, exercise physiologist and nutrition scientist Stacy Sims shared, “During my early research I was told, ‘women are an anomaly, so we don’t necessarily study women in sport nutrition or exercise science.’”

This concept is upsetting to think about because everyone’s body is different, and therefore their nutritional and physiological needs must be unique to each individual as well. But, if women continue to be underrepresented in physiological research, it is impossible for their unique needs to be met in terms of their diet and training suggestions.

Now, beyond living in the shadows of men’s sports, the issue of normalized sexism within women’s sports themselves is ANOTHER major issue in the world of women’s athletics.

In the BBC Elite British Sportswomen’s survey, 41% of respondents said they had experienced sexism within their sport, but only 7% said they felt comfortable enough to report it.

Respondents who said they didn’t report the sexism gave reasons like not knowing who to report to, fear of not being understood/taken seriously by male coaches, and thinking it wouldn’t make a difference if they reported it or not. Many also mentioned fearing that their chances of selection for teams or events would be harmed if they stood up and spoke out against sexism.

With these facts in mind, there is no doubt that the culture of sports is an unhealthy one for women, but these concepts aren’t even the full image of the environment. The massive problems of unequal pay and sexual assault within women’s athletics are not even mentioned in this article. But, these are issues that this culture also contributes to and are important to be aware of.

While it is evident that playing sports makes people of any gender healthier and stronger physically, as well as teaching confidence, leadership, and teamwork, it is equally as obvious that the world of sports is only set up to benefit men.

And after learning about the seriousness of sexism in the world of sports, an empty gym at a high school basketball game might not seem that shocking, or like that big of a deal in the grand scheme of things, but that doesn’t make it any less disheartening.

We might not be able to change the world of sports or the misogyny it has been built on, but we can reevaluate our language and actions, and what kind of culture they are contributing to.

If the world is made for women athletes to fail, we need to work to build these athletes up in their high school years, and provide them with the confidence they need to survive in the sexist climate of athletics, instead of letting this climate grow in our halls.

I encourage you to support our Saber athletes equally, no matter their gender, cheer loudly and show up for hard-working players, because it is clear that the rest of the world does not always do this.

Iverson, Katja. “Why You Should Think Twice about Ignoring Women’s Sports.” Womendeliver.org, 7 May 2016, womendeliver.org/2016/why-you-should-think-twice-about-ignoring-womens-sports/. Accessed 24 Jan. 2022.